The ball often hit the tree and never the man.

I am trying to represent this sentence as a constituency-based parse tree, but I am having a hard time deciding where to put the adverbs often and never.

For the sentence The ball often hit the tree. it is simple:

Even the coordination of NP can be represented easily:

Where would the constituent never be added to the tree? It is connected to the noun phrase the man, but at the same time adverbs never belong into noun phrases. What structure is generally used to represent this special case where adverbs of a verb phrase belong to a noun phrase? 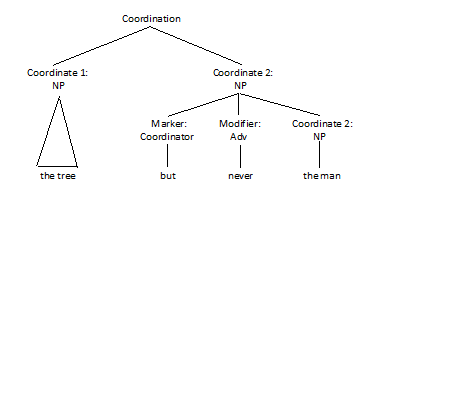 Here is a tree for your example showing the coordination of two NPs with "never" in the second one.

I think this is much better than saying we have a coordination of VPs (or clauses), with ellipsis within the second coordinate.