This picture shows clearly what I'm looking for. Is there a phrase for that? 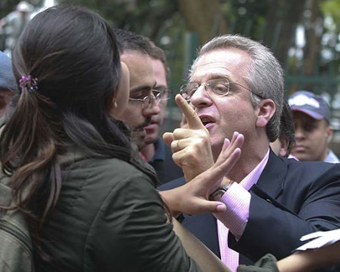 In French there is a phrase for it, with the French word for finger, "un doigt remuant" Is there any in BrE and in AmE?

EDIT – For Clarity – The person moves his finger up and down, in a threatening way, as if he wanted to touch the other person's nose. Also, he often moves it rhythmically, as he speaks. The only vídeo clip I found about "finger in the face" shows what I'm not looking for. https://www.youtube.com/watch?v=peJ2veop1bk

One vivid way to describe the act of moving one's forefinger toward the other person's face is "jabbing [one's] finger." A Google search turns up multiple examples of this usage. From Laura Simon, Dreams of Paradise (1991):

"It's a legitimate business from which I fully expect to realize a profit. I wouldn't have started it otherwise. I would have sent you anonymous envelopes full of money instead. God knows, it would have been easier. Given that fact," he went on, jabbing his finger in front of her face, "I can't comprehend why you should find it less objectionable to sell your designs to some cigar-chomping stranger than to me."

Hazel swatted his finger away.

Then his eyes got all wild and he started screaming and jabbing his finger in her face, as if he was going out of control. He looked like a lunatic. But she didn't budge. She just waited for it to be over.

Turek was loud and accusatory from the moment he approached Atwater's car. Atwater's young children were terrified and hysterical. Yet when Atwater asked Turek to lower his voice because he was scaring the children, he responded by jabbing his finger in Atwater's face and saying, “You're going to jail.”

The second stated basis for the suspension was a December 1999 incident where Dr. Mileikowsky was informed, during performance of a surgery, that his assistant did not have surgical privileges. Dr. Mileikowsky allegedly backed the operating room manager against a wall while screaming at her and jabbing his finger in her face.

Two minutes later I was sitting in his office while he stood over me, jabbing his finger in my face. "Where were you yesterday afternoon?" he shouted.

In this case, the exclamation points in the transcript indicate moments where O'Reilly barked loudly and jabbed his finger towards Rivera's face. In fact, a video clip of O'Reilly shouting and jabbing his finger at a stunned Rivera circulated on the Internet and was discussed on political talk shows for the next week.