I used the phrase "pore over" the other day and realized that I have no idea where it came from (or how to spell it – I originally thought it was "pour over").

After looking it up, Merriam Webster says to pore means, "to read or study attentively —usually used with over" from the Middle English "pouren", first used in the 13th century.

What type of origin does pouren have and what does it mean?

The verb to pore means to examine something closely; in great detail. It can also refer to meditating over something, and to be fully absorbed in a subject. We usually associate the expression to pore over with academics who are passionate about their fields, and students who study obsessively before an important exam.

a scholar poring over a rare old manuscript

She spends her evenings poring over textbooks

Especially in the past, individuals who burned the midnight oil reading fine print would inevitably suffer from eyestrain. Working in poor light was thought to be a cause of myopia (short-sightedness) and an occupational hazard. Even today a common explanation for myopia is near-work. And there are studies which claim that myopic children have higher IQs.

In several online references, I found an obsolete term purblind which may explain the meaning behind pore.

The OED provides the following definitions: 1. Quite or totally blind. Obs. rare. 2. Of impaired or defective vision, in various senses: a. Blind of one eye (obs.). b. Short-sighted, near-sighted. c. (Sometimes app.) Long-sighted, dim-sighted from age. d. Partially blind; almost blind; dim-sighted, generally, or without particularization.

In 1627 Francis Bacon's Sylva Sylvarum, or Natural History was published. (Emphasis mine)

Pore-blinde men, see best in the Dimmer Light; And likewise have their sight Stronger neere hand, than those that are not Pore-blinde; And can Reade and Write smaller Letters. [...] But being Contracted, are more strong, than the Visuall Spirits of Ordinarie Eyes are; As when we see thorow a Levell, the sight is Stronger: And do is it, when you gather the eyelids somewhat close: And it is commonly seene in those that are Pore-blinde, that they doe much gather the Eye-lids together.

Therefore pore-blinde people were not considered to be "pure" blind and according to Francis Bacon, they were in fact more able and skilled at reading minuscule print than normal-sighted people.

From An Universal Etymological Dictionary... By Nathan Bailey (1757)

To PORE [... because pore-blind People put things they look at close to their Eyes] to look close to

To PO'KE [prob. of pacher, F.] to rake or puddle with a stick, etc. also to pore purblindly

A New Universal Etymological, Technological, and Pronouncing Dictionary of the English language. (1858) By John Craig
link

PORER, po'rur, s. One who pores or studies diligently.

From an 1882 book titled Folk Etymology. A Dictionary of Corrupted Words, we read the following: 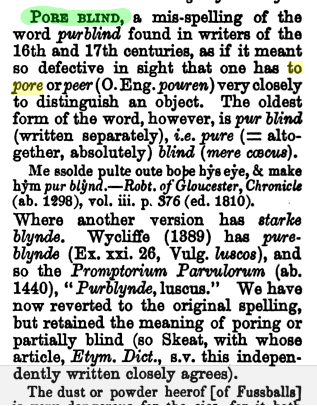 It seems probable that the verb pore derived from the common misspelling of purblind, pore blind. From Folk Etymology the following extracts appear to affirm this hypothesis:

"The dust or powder heerof [of puffballs] is very dangerous for the eies, for it hath beene often seen that divers have beene pore blinde ever after, when some small quantitie thereof hath beene blowen into their eies.— Gerard, Herball, fol. p. 1387 (1597)

The visage wan, the pore blind sight,
The toil by day, the lamp at night.