I stumbled upon this expression for the first time while doing some research for an answer, and I have to admit I love it! An explanation of rat running/ a rat run is as follows

"Rat running/ A rat run" is the act of taking a detour, often planned, on a
smaller and often little known or less traveled street or road. If you
are familiar with the layout of an area, rat running can be a good way
to avoid the congested main roads. There are some things to keep in
mind when determining whether or not to rat run

How well known is it? If I use the expression with my British English friends and relatives will they be familiar with the term? Is it a recent coinage? Is a rat run similar to taking a shortcut?

Can anyone trace its history?

Is a rat run similar to taking a shortcut?

Not really. Quite simply, it is a minor street (let's say: "not supposed, by the authorities, to be used by commuter traffic") that is cleverly / sneakily / craftily / ironically used to avoid being on the "normal" major traffic streets. It would usually be shorter, but may be more circuitous as it avoids traffic.

As John Mee and Erik Kowal have both pointed out, it is a noun.

Josh61 has already posted the correct definition "rat-run: (British) a side street used for fast commuter traffic. A phrase and phenomenon of the late 1980s. link" Another correct definition from the OED, courtesy of Medica "British. informal. A minor, typically residential street used by drivers during peak periods to avoid congestion on main roads: 'our road was used as a rat run between two main roads.'"

How well known is it?

Every person in Britain, especially Londoners, know it.

Note too that the meaning is obvious, rats tend to scurry down pipes, tiny lanes, and gutters in order to avoid populated areas

I have to admit I love it!

It's an exceedingly rich expression so you are very wise to love it. You know how the single worst thing, in the Universe - worse than Nazis, worse than vegetarianism, worse than 5th degree burns, worse than child molestation, worse than politicians, worse than terminal cancer - is Commuting. It rather makes you think of the phrase...

and just how the whole situation is unbearably horrible. Traffic in London is a killer: somehow rat run manages to do a number of things at once:

(*) It is rather derogatory towards the "civilians" living on the nice little quiet residential streets. ("Screw those rich bastards with their Balthaup kitchens - to me it's just an ugly pipe like a damned rat would run down. I'll drive on it if I want to! Hah hah! Keep your damned kids inside!")

(*) It anti-enobles the whole entire act - the whole lifestyle - paradigm - milieu - of living and working in London, down to a pointless, animalistic, disease-ridden subconscious scampering: in filth.

(*) For me it really captures the 80s (for some reason it's really like a kind of Brit equivalent to the film "Wall St", you know?): it has a pithy, brutal, self-aware-of-greed-and-pointlessness quality. Quite amazing.

For me personally, it immediately connects with The Stainless Steel Rat dystopian novel by Harry Harrison— commuters in a small way trying to beat the system; hopeless of course, but then we're all just... rats.

Note that as with any issue in the UK, it immediately became a sort of central issue in the overall police-state, authoritarianism, general sort of ongoing social battle. "The man" immediately tried to clamp down on drivers using rat runs, via adding strange bumps on the roads and so on. (In contrast, government-sponsored public transport vehicles such as buses got their own lanes. "Oh, you wanna try using rat runs huh? How's THIS? Stfu and pay taxes" ... sort of thing.)

Here's a poor attempt at indicating a typical London rat-run, but I encourage any real Londoners to click Edit and put in a better one (using AZ rather than the non-British Google.maps!) I wonder if any black cab drivers use this site as a pastime? 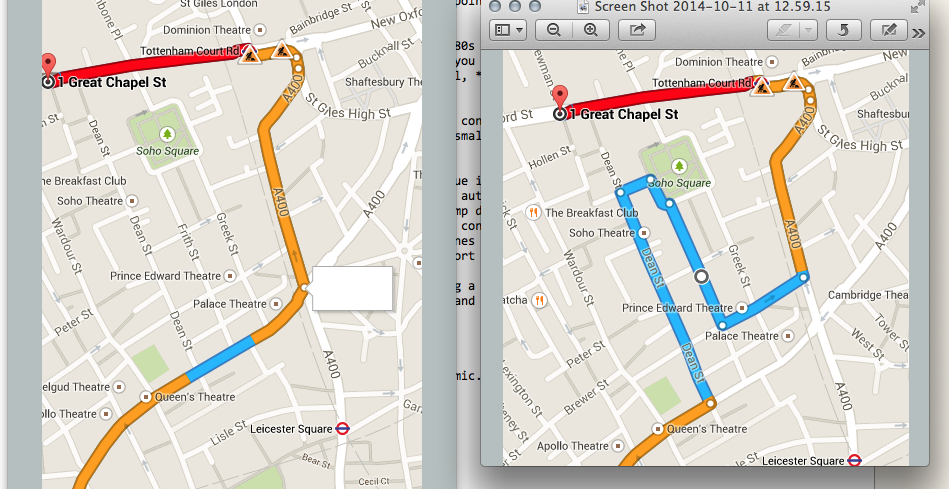 Poor example of a rat run. You avoid a very busy intersection by nipping along some residential streets, making as much engine noise as possible to irritate the overseas wealthy.