The owner of Fun Fun Island is very sad. It appears he has lost his wheel. I'd like to help him out. I suspect it fell somewhere in the Lanayru Desert, the closest surface world. Do I need to go explicitly look for this wheel, or will it turn up in the normal course of my adventuring?

(A generic hint about its location would be nice, too, before mentioning the specific location. Please markup hints as spoilers.)

Finding it is not a requirement to finish the game. It just grants you access to the money making minigame that is covered in this question. I would suggest getting it as it is an easy source of rupees with little to lose and a lot to gain with relative ease.

Unless you are a very throurough in searching every spot there is in a map for anything, you probably wouldn't see this in your normal, go-for-the-objective adventuring. It's location is near a "hidden" chest and off the beaten path.

To reach it involves some ledge climbing and the help of a Timeshift Stone.

How to get it:

When you first enter Lanyru Desert (after exiting the mine), there will be a Timeshift Stone nearby. Hitting it will reveal some vines on a nearby wall that you may climb up.

There will be a ledge that you can climb up to to reach another cliff on the other side of the little gorge.

You will end up on a narrow land bridge where below you will see an isolated chest sittng by and the wheel at the end (in the corner). You can't miss it.

How to easily win at ‘Fun Fun Island’

The majority of this game can be pretty easy. Falling through the Fortune Rings and dodging the Dodoh Balls can be easily navigated once you know which paths are relatively safe and which ones should be avoided. It's the landing that is the tough part. I'll walk through these phases separately. But first...

When free falling, the controller is pretty sensitive to your movements. For this game, you barely need to tilt it to move in the direction you want, and you'll have plenty of time to move to the part of the screen you want without it getting out of control. You shouldn't try to tilt more than 10 degrees, you shouldn't need to.

First let's understand what you're up against. There are 5 Fortune Rings and 4 sets of Dodoh Balls alternating starting with the rings. We want to avoid the Dodoh Balls so here's how big each set is and how they move.

Avoiding the stationary balls should be simple so I'll leave that to you. However you have to be careful with the rotating ones. My advice, never try to weave through the rotating balls (sets 1 and 3), always go through the middle. You can risk it and try, but why make it harder on yourself? 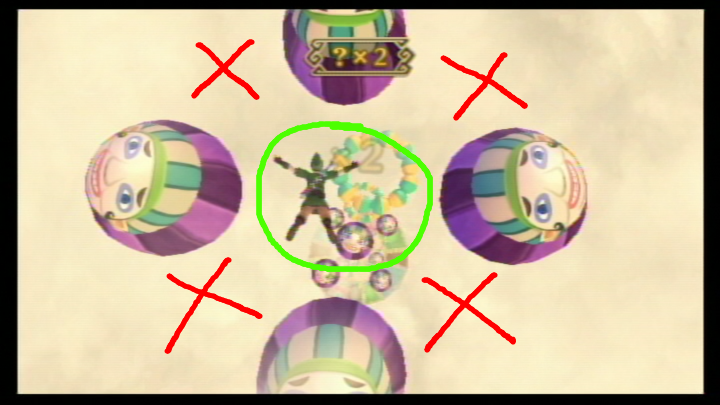 Ok this is where it gets tricky. I have to admit though, this is not foolproof advice. There is a degree of randomness in this game so it won't always be the same. But, this should be very close every time. The risk of playing this game is very small but the reward is so much bigger. I can almost guarantee you will miss a lot here landing in the Loser Space, but I promise you'll win enough here too.

At this point, I will assume you have a 10x multiplier by getting all 5 rings. Dodoh claims that the wheel slows down for every ring you get. I don't know if that's really true or not, I can't tell the difference. So I am assuming that the wheel should be rotating at roughly the same rate here.

First thing to note is the ground and how it looks like. You should notice that there is a orange and yellow "star" each with 12 points. I would look at these like they are clocks. You'll need to use these as reference points to help you with this. These "clocks" are mostly stationary. You just need to be aware that the camera is actually rotating a little too. 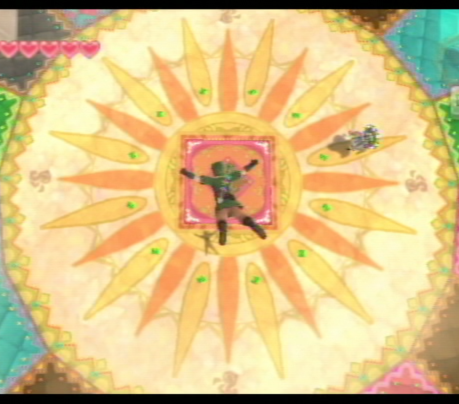 As far as I can tell, if you fall in the open stance (and not diving headfirst), the wheel will generally make almost a full rotation from when you hit the last Fortune Ring and you hit the ground; sometimes a little less, sometimes a little more, or it could just be my reaction time not being consistent. I estimate 11/12 of a rotation based on the video I took.

Before you reach the last ring, find the 50 rupee space and keep tabs on it's location relative to the clocks. You'll also want to pay attention to where Link is relative to the ring so you can get ready.

When you finally reach the ring and you hear the sound of collecting it, find the point of the orange or yellow star that is closest to the middle of the space and keep track of that. The region that between that point and the previous point of the same color is your target area to land in. 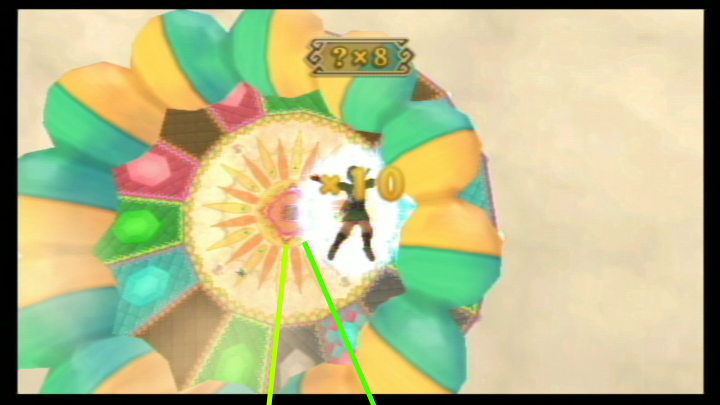 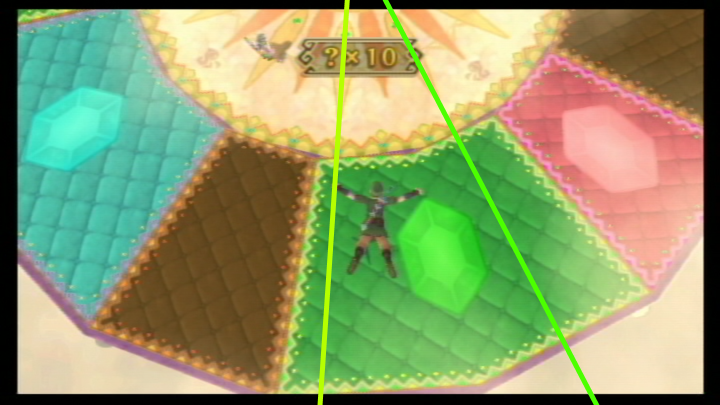 Also, remember that it will probably be rotating too. At that point, it's just a matter of hitting your target and making any adjustments you can. With any luck, the 50 rupee space should come up right under you. If you know you're behind, you could dive in headfirst (point the WiiMote straight down) and hope that will make up for it. 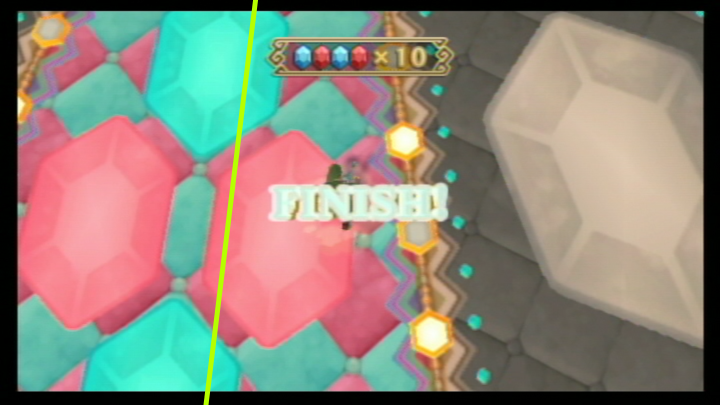 Here's a video I recorded that you can analyze:

What are the prizes for completeing the Thunder Dragon’s challenges

In the challenges, there are 4 different types of things you could possibly win.

First of all the two most obvious things, Rupees and (mostly) rare Treasure. You can win these in either the Silent Realm challenges or the boss battles. Other things you could win in boss battle mode include a Piece of Heart after beating 4 bosses and the Hylian Shield after 8 bosses.

Here's the prizes you win if you stop in the boss rush: