I'm still in Silver Rank in HOMM6, and I've unlocked the 2nd and 3rd slots for the traits

The game hints you that there's 5 slots, but the Altar of Wishes doesn't show them

Has anyone been able to acquire them? And if so, how?

I've reached platinum level and have both DLC packs; there still appears to be no way to purchase the final two dynasty trait slots, so I suspect this is a bug or else they are still reserved for some additional DLC yet to be released.

Are there preset heroes in Might and Magic: Heroes 6

There are preset heroes, but only if you play Heroes VI offline. When you aren't connected to the Conflux, you can choose from a list that contains a single Might and a single Magic hero from each faction. 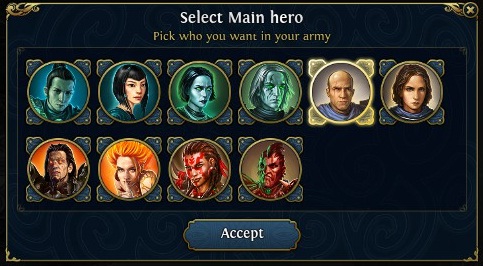 When you are connected to the Conflux, you are restricted to your dynasty heroes and the factions they represent. However, as you finish the campaigns, you gain the heroes from those campaigns. I'm guessing (hoping?) that once you have finished all the campaigns you will have a might and a magic hero from every faction in your dynasty.

If I'm wrong, or if you want to play online skirmish or multi-player games right now (and be able to choose the faction you start with), you have to create your own hero for each faction.

A Dynasty tracks your progress throughout the game, both single and multi-player, and allows you to gain some benefits from earlier achievements. It is made up of a bunch of pieces that are all inter-related.

Heroes - Dynasty heroes include your main heroes from the campaign missions, as well heroes you have created for multi-player. Dynasty heroes are able to benefit from other pieces of your dynasty (traits and weapons) and also help build up your dynasty by earning experience and building up your Dynasty weapons.

Weapons - A few items in the game are considered "Dynasty Weapons". These items are available to all your dynasty heroes, and also gain experience whenever the hero wielding them does. They can level-up, giving them additional powers.

Altar of Wishes - Earning achievements for your dynasty earns you dynasty points. You can spend these at the altar of wishes to unlock new options. Some are cosmetic, like new portraits for your heroes, while others have gameplay impact, like new dynasty weapons or additional dynasty trait slots.