I tried making multiple cell blocks, with each trying to be relatively self-sustainable (for each cell block, a shower, canteen, yard) but even though a canteen was closer to prisoner's cells, they still went down to the first canteen, where the other cell block was eating.

In other games, when multiple blocks shared a canteen, I'd change the regime so half the population was eating while the other was in the yard, or whatever. Here I didn't do that since I figured they'd go to the closest one, but obviously I was wrong. Here are some other things I tried:

I suspect that Logistics can solve this problem somewhat, but I didn't really want to direct each prisoner to a particular place to eat, although I could if that was solution.

The bigger question I have then is, is it even worth having multiple canteens and kitchens? I've seen some layouts in the Steam Workshop where in a centrally-located position, there is just one large canteen and kitchen area that apparently services all cell blocks, presumably at different times of the day. Is that the most efficient method? It always seems that fights break out during meal time. Metal detectors at the doors don't help if they use their spoon to disembowel an inmate over some Jello in the canteen.

If it matters, I've not yet had an issue of running out of land, I usually find that a particular layout is faulty, so I sell my prison to start another with more startup cash to test another layout. (I'm hoping I get one big enough where it does become a problem!)

I've used the logistics view to solve this. I tend to expand slowly so I usually end up with multiple cell block buildings and different canteens to service each one.

Go to Logistics mode, then Food Distribution. This will bring up an overlay showing where each cell block goes to eat. Click and drag from the cell blocks to the canteen you want if you don't like the currently assigned or default canteen. Access to the food distribution screen requires micromanagement to have been first researched by your prison warden. 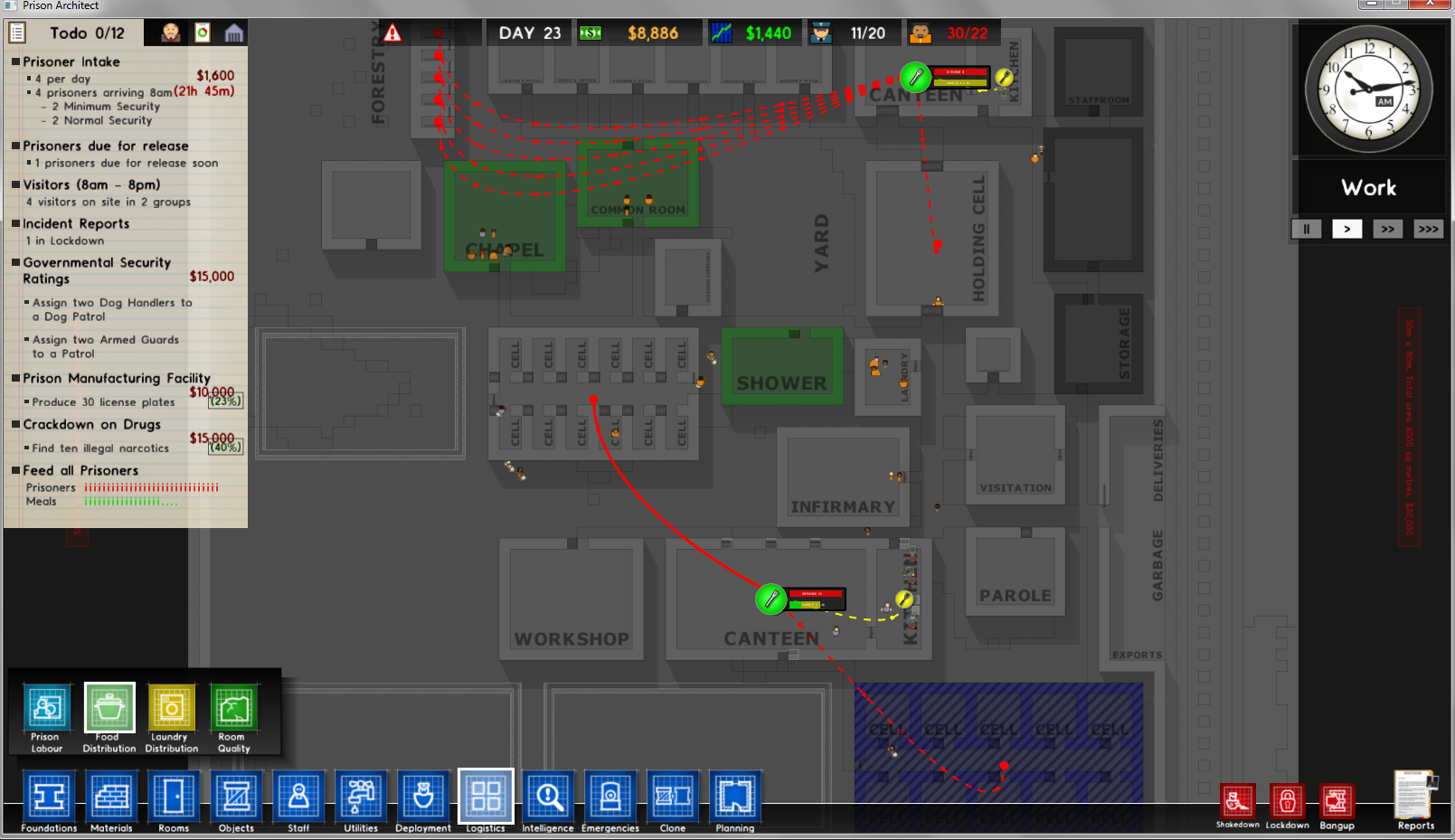 How to Feed all Prisoners

I managed to meet the requirements to feed all prisoners. Much of it is luck, due to the goal requiring you to literally FEED all prisoners, and not all prisoners will be hungry at the same time.

The To-Do list has three icons for the prisoners:

The simplest way to actually feed all prisoners would be to limit the Eat activity to once a day. Doing so, and ensuring you have enough Cooks to make enough food, will ensure you can serve up the maximum amount of that gourmet jail slop.

Note that there isn't actually any reward for being able to feed all your prisoners; it just seems to be an indicator of your prison's current hunger state.

How to make the prisoners leave their cell

Try to check your deployment area, you might have assigned the way out as staff only.