I know that if you just run the install with the game present Steam does all the work for you. But before Steam even attempts to install/detect a game, it will first check if you have enough of free room on the storage device you're trying to install the game to.

Now check this scenario. You install Middle Earth: SoW on your 256GB SSD. It's a large game, full install takes up over 152GB. Now, Steam gets screwed in some way and no longer detects your game as installed.

However, since the game takes over half of the size of the SSD, I cannot make room to have enough room to install it twice, not to mentioned I barely managed to make enough space to install it once.

One method I'm thinking of is to move the game to another drive (if you own one) and then start the download again. Then you shut down Steam, move the game back and resume the download, and Steam HOPEFULLY recognizes the game and everything is great again, except you lost four hours moving 150GB around like an idiot.

I'm looking for a different method; Steam must have the list of installed games stored somewhere. In which file does something like that reside, and how do I edit it?

TLDR; create or modify your current game's appmanifest file (in your case appmanifest_356190.acf) in your Steam\steamapps folder, and adjust the following values:

This worked for me after testing out a similar scenario. I'm not sure what values are strictly necessary to change.

Below is the route I took to arrive to this conclusion.

I simulated your problem.
On one of my disks I had little space left, so I started downloading a game that was at least half that size, paused it after a few seconds, and quit Steam.

I checked to see what files were modified/created based on the game's Steam ID, and found (unsurprisingly) the appmanifest_.acf file (in the Steam\steamapps folder), which contains integers that tell Steam what game has what status and can be found where (the same file user l3l_aze refers to in their answer).
Nothing revolutionary.

I then tried a few scenarios:

I don't know when this changed, but now you can download games to another drive with ease in 3 easy steps.

Added pictures for your comfort: 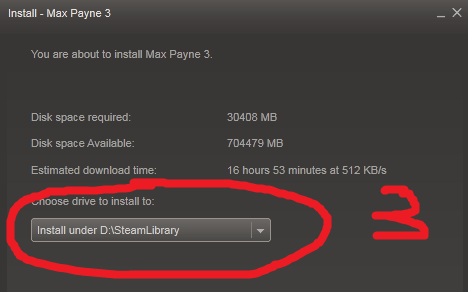 You can try doing that: