What does the WIT parameter do? How is it calculated?

The WIT is used for calculating bonus resource gain when operating a major module with the Operate skill. To use this skill after you've learned it you have to stay in the same room as your selected major module for one turn, and after that, until you leave the room, you can enjoy bonus resources equal to half the character's WIT from the module.

For other modules it does different things:

Shop (with Merchant): One tenth of total wit rounded up is added to the Dust generation every turn.

Generator: Each point of wit adds 0.5% chance to find Dust on the level.

LAN: Each point of wit adds 1.2% percent defense to all modules (major and minor) on the level.

Tactical HUD: Each point of wit adds 1.2% percent attack power to heroes on the level. When upgraded to Tactical HUD IV, the bonus increases to 1.8% percent.

Higher WIT will also allow you to repair modules faster with the Repair skill.

As to how it's calculated - as any other stat. Each character has his/her/it stat growth, and you can get bonus WIT from items or skills.

How does Dust work

You have very little control over it, it's mostly the RNG.

Note that dust is reset after each level, as are certain excess items, while industry is persistent, (but more dust might let you get more industry, or food, or science) which effects whether or when selling items or spending industry is worth it.

As I said, I haven't played the release version much yet, there's likely to be more specific items and modules, but that's everything I'm aware of.

Regarding tactics/strategy, it's more about adapting your controlled area/which doors you open/build things on to make use of the dust that you have, as opposed to taking specific actions that grant you more dust, since often those actions simply aren't available.

How many doors are on each floor

I analyzed the associated section from the GameConfig.xml according to some information that was provided here.

I entered the given values (in bold) into a table and extrapolated the missing values. Link="true" means that linear interpolation between two successive values is used. Factor="0" sets the slope to 0, so following values stay the same. 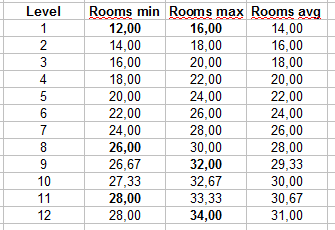 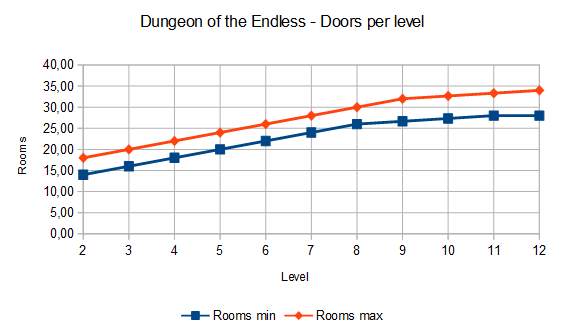