D&D 5e's Hoard of the Dragon Queen has a creature called a "dragonclaw." It's humanoid, and it can apparently be of higher rank than a typical cultist or kobold. However, I am not finding any descriptions of this creature other than simple numeric stats.

What is a dragonclaw? What would it generally look like?

A Dragonclaw is the title for a higher-ranking cultist. You can find the description and stat block in the Monsters Appendix of Hoard of the Dragon Queen. (Dragonwings, Dragonfangs, and Dragonsouls are also ever-higher ranking cultists.)

You can find more material on each of the ranks in "Cult Structure" in the introduction of Rise of Tiamat. And for a visualization check out either p.71 of HotDQ hardcover or p.6 of the HotDQ Encounters .pdf. 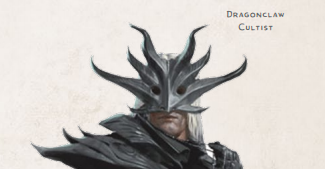 [RPG] Making the most of Adventure Bonds

My first response would be to question whether the players know every single thing about their characters, even after the number of sessions that you have played with them. I find it very difficult to believe that there are not gaps in their backgrounds that you can use this as an opportunity to flesh out.

Looking at the list you've provided, it seems clear that these are written to be used by new characters, so my approach would be to adapt/change/use these as inspiration for bonds that do make sense for the characters you have, so that there is something to tie them into the adventure.

Take 4. as an example - surely there is one of your PCs who could have a link to a similar NPC. Similarly for 1 and 5.

I would try to view these bonds not as a limiting straight jacket, but as a tool for increasing the richness of the character backgrounds. Also, if possible then get the players involved in coming up with these bonds. There is a similar mechanic in Dungeon World and Apocalypse World where the GM is specifically encouraged to ask questions to the players to establish these types of bonds.

As for why these things haven't come up so far in the PCs' adventures, there could be any number of reasons , which is exactly why I suggest discussing and coming up with something plausible with the player in question. Maybe the reason a mentor hasn't been in touch is because they've been ill. Maybe he's been resisting contacting the PC for some reason, maybe he doesn't trust the PC for some reason but his hand has been forced etc.

So ask, 'which of you has a link to Greenest? Why?' etc. You will be surprised how creative your players can be, and getting them involved will give them a real buy-in to the story. If you do right, you're also likely to end up with a bunch of character specific plot hooks for future adventures that you can use to make the campaign much more personal to the party.

[RPG] Who wears the purple robes

Okay, I think I understand the confusion, but I hope I can clear it up for you.

Going back to the Preface, it says there are no formals grades within the ranks of Wearers of Purple. Presumably that means that to your everyday cultist from initiate up, whether a Wearer of Purple was a dragonclaw (lowest-rank cultist) or a dragonsoul (just under wyrmspeakers), you have to treat them like they were a wyrmspeaker. In other words, Wearers of Purple are essentially the hands and voice of the wyrmspeaker themselves when the wyrmspeakers cannot be physically present.

The Prisoners mission simply says that that mission provides an excellent time to introduce players to the Wearers of Purple through a glimpse of Frulam Mondath, but you could have introduced her on one of the other missions.

Edit: There is also Langdedrosa Cyanwrath somewhere about town. While never explicitly named as a Wearer of Purple, he has enough pull within the cult to release prisoners, his own personal troop of followers, is rumored to be Mondath's right-hand man, and is pictured in purple on page 17. So a DM could have Cyanwrath be the example Wearer of Purple the party first spots. Regardless none should actually be encountered until the end of the chapter, where the party will meet Cyanwrath.