The type construct includes this trait:

Not at risk of death from massive damage. Immediately destroyed when reduced to 0 hit points or less. (MM 307)

Besides the 9th-level Clr spell miracle [evoc] (PH 254), the 9th-level Sor/Wiz spell wish [univ] (PH 302), and similar effects, is there a spell or other effect that can undestroy a construct?

As precedent, the Spell Compendium includes 2 spells that bring back from death or destruction creatures outside the purview of the 5th-level Clr spell raise dead [conj] (PH 268) et al. The 6th-level Clr spell revive outsider [conj] (SpC 175) brings back from the dead a creature of the type outsider, and the 6th-level Sor/Wiz spell revive undead [necro] (SpC 175-6) brings back from destruction an undead creature. Is there an effect like this specifically for constructs?1

Casting the 7th-level Clr spell greater humanoid essence [trans] (Races of Eberron 186) on the remains of a destroyed construct may transform the construct's remains into humanoid remains, permitting the spell raise dead to work on the destroyed construct then, but that seems shady.2 It there a more elegant solution to return from destruction a packmate or shield guardian? 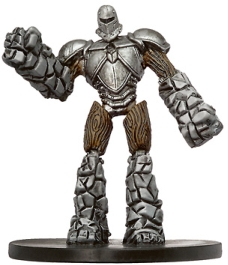 Since there is no RAW requirement, think about what a construct is: material + magic. Also, a construct is quite literally crafted.

By the reasoning a construct can be crafted, treat it as a magic item. From d20srd.org Magic Item Basics:

Magic items, unless otherwise noted, take damage as nonmagical items of the same sort. A damaged magic item continues to function, but if it is destroyed, all its magical power is lost.

So by destroying a construct, you also dispell it, causing it to cease existing, like any other destroyed permanent spell. Even if you reassemble it from it's component parts, and recast the spell that makes it a construct, it's a new construct, not the same as the previous one. You could cast Greater Humaniod Essence on the reassembled item, but you would not be casting it on the actual construct, which has ceased to exist. So you would end up with a humaniod body, but there wouldn't be a soul to return to it.

You can also mend a broken magic weapon, suit of armor, or shield if it is one that you could make

implying that it is impossible to fix a broken construct.

[RPG] Why the huge difference between divine and arcane compulsion effects

The best way to judge what classes should have access to a spell is to compare it to the kind of spells those classes already have.

Wizard and Sorcerer compulsions tend to be forceful in method and drastic in effect: The examples you gave describe subverting the victim's normal mental process by forcibly inserting a foreign thought, and blatantly stealing control of the victim's mind.

Clerical spells, on the other hand, tend to use more straightforward methods of achieving their ends, and often express the role of clerics as spiritual leaders: Thus, the spells that allow them to speak with authority and be obeyed.

As for why the power of Power X isn't compelling... Well, if you look at the ecology of gods as described in, for example, the Planescape setting, belief is the food of the gods - without it, they lose strength and eventually starve to death, or at least enter a state that is for most practical purposes equivalent to death. A follower who only vaguely follows their patron deity's teachings is still more faithful, and therefore more valuable, than an unbeliever magically compelled to serve. Of course, individual gods might have a thing for magical compulsion, but that's not enough for something to get included in the standard priesthood package.

Oh, and like mxyzplk suggests, there's more game design-y reasons for it, too: if Clerics were good at all forms of magic, they'd be far superior to wizards, even enchanters - and playing an enchanter would be much less interesting.

The spell creates fire and projects it away from you in a cone. The difference between this spell and, say, fireball, is that the fire is no longer magical once it's projected, and thus overcomes Spell Resistance.

Natural fires require fuel to maintain themselves for long. Once the spell is no longer maintaining the flame, it should quickly dissipate, assuming it wasn't cast into a field of dry grass or over a pool of oil. Note that lesser acid orb from Complete Arcane and Spell Compendium is also Conjuration(Creation) with an Instantaneous duration and creates neither an object nor a creature, simply a (non-magical, after leaving the caster) spell effect.

Orb of force is clearly meant to work like orb of acid, although this explanation is going to belong more on Physics.SE than RPG.SE. Force, in real world physics, is transferred between objects when they touch. Ergo, rather than "breaking" or "bouncing off", an orb composed entirely of force should be absorbed by a target (or by the ground or scenery on a miss) on impact. This is what does the damage of the spell - raw kinetic force being transferred to a relatively-stationary target.

Of course, the spell in this case probably shouldn't have the [Force] descriptor, as DnD [Force] has absolutely nothing to do with real-world force, as indicated by the fact that [Force] has full effect on incorporeal creatures and force should have none. If you (or your DM) want to rule orbs of [Force] continue to exist after striking a ghost or object, go for it. (However, both [Force] and force can be assumed to be weightless and noncorporeal, so rather than falling to the ground or filling a ball pit, they should probably keeping bouncing like that one scene in Men in Black until it escapes to outer space...)