If you have the dual wielder feat, and you are riding a mount can you wield two lances. Also what would the damage dice be?

Also, a lance requires two hands to wield when you aren’t mounted.

So as long as you are mounted, you can use a lance in one hand. The Dual Wielder feat allows you to use two-weapon fighting with any one-handed melee weapon, so this works fine.

As for the damage die, the damage die for the lance is a d12, and there's nothing in its special property or in the dual-wielding rules that would change this.

Using a reach weapon while mounted

If you're willing to go outside the Player's Handbook for clarification, a reach weapon does work a little differently for a rider atop a mount: a reach weapon becomes a little more versatile.

The Player's Handbook only says, "For simplicity, assume that you share your mount's space during [mounted] combat" (157). The handful of times creatures otherwise share spaces the creatures are foes (like during a grapple), the creatures are all really little (like a gang of grigs) or one creature's very big and the others littler (like an ogre and a gang of grigs), or one creature's helpless (like when one's dead). Because those all have clear rules and this case doesn't, precisely what the Player's Handbook actually means when it says a rider and mount share the mount's space is up to the DM. With its silence, the Player's Handbook implies that—much like if the rider's mount were wielding the reach weapon instead—a rider wielding a reach weapon is burdened with the reach weapon's lack of close-combat functionality. And, as you may've noticed, this kind of sucks. 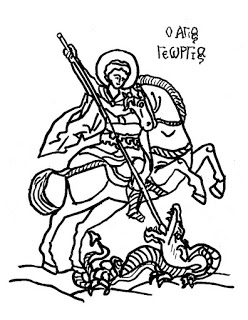 Now, let me preface this next part by saying that the Rules of the Game columns by Skip Williams—a coauthor of Dungeons and Dragons, Third Edition—take some heat because the columns sometimes present wrong information. (For instance, this column had to be reposted because of errors.) Yet in this case, instead of creating a new rule (which the columns sometimes do), the column clarifies the above ambiguous one. The Rules of the Game Web column "All about Mounts (Part One)" says

(Emphases mine.) So, while I expect most folks (like me!) imagined a typical reach-weapon-wielding rider threatening the 10 ft. around the typical mount—and leaving that pesky unthreatened usually-5-ft. gap between the reach weapon's threatened squares and the mount so that the mount must defend itself—, this ruling allows a reach-weapon-wielding rider to, essentially, threaten through the mount so that he can also launch attacks against adjacent foes. (While the first emphasized statement's important, the second seals it: a creature can't make attacks of opportunity against foes with relative cover, and if, for example, a rider measures from the farthest-away-from-the-foe square of his mount through the mount, the Player's Handbook's unclear if the mount's granting the foe cover because rider and mount share the mount's space; this ruling clears up that the mount doesn't grant the foe cover from the rider.) St. George approves.

Keep in mind there's still an area into which a typical reach-weapon-wielding rider atop a typical mount can't make attacks: within his and his mount's shared space! The Dungeon Master's Guide says that "a creature can attack into its own space (unless armed with a reach weapon)" (29). (Emphasis mine.) Beware gangs of grig highwaymen! (But only because they're so adorable.)

Let me make clear that I, too, don't like this ruling's provenance, but mounted combat is so vague in the Player's Handbook that relying on an outside source—even a Rules of the Game column—to make heads or tails of it seems better than giving up and playing Smash Bros.

That was long and complicated. These two'll be quick. I swear.

"How much damage does a lance deal?"

"Can a rider wield a lance two-handed?"

Sure. While a lance is usually a two-handed weapon as per Table 7–5: Weapons (PH 116-7), the Player's Handbook also says, "While mounted, you can wield a lance with one hand" (118). Thus, a mounted rider can use a lance either one-handed or two-handed like St. George up there (although, really, St. George may be using a longspear, which is two-handed, mounted or not). A lance gains—not loses—versatility when a rider's mounted.

Using an 8th level Barbarian with the Dual Wielder feat you would have the following option while using a pair of +1 long swords: