A Transmutation Wizard has decided to make a Transmuter's Stone and has chosen the property of granting Darkvision. What happens when a blind character has this stone in their possession?

Darkvision is unfortunately useless to a blind person. Weirdly, when a race gets Darkvision, it's described in that race's entry. But the Transmuter's Stone says this:

Darkvision out to a range of 60 feet, as described in chapter 8

Within a specified range, a creature with darkvision can see in darkness as if the darkness were dim light, so areas of darkness are only lightly obscured as far as that creature is concerned.

Blind people can't see in dim light[citation needed], so seeing in darkness as if it was dim light doesn't actually help them at all.

[RPG] How do vision penalties due to darkness work

In uniform, shared light levels, vision penalties due to darkness work fine, intuitively, and exactly as written (no surprises). The deeper the darkness, the more trouble you have seeing, hitting things, and protecting yourself.

This, however, isn't the case you're asking about.

Let's stick with RAW to analyse this situation of two people in different lighting conditions. The results are almost entirely the same whether whether Aspartame is in magical darkness or the (possibly very dark) shadow of an oak tree. The results are going to be weird.

These results are pretty counter-intuitive. In real life, the rogue sneaking through the shadows has an advantage on everyone else, and you've probably handled it as such — the rogue themselves isn't blinded by being in the shadows, but they are in Pathfinder! 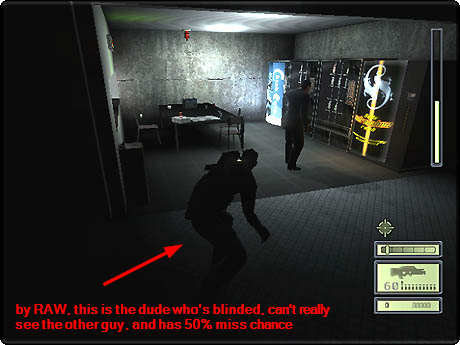 Pathfinder's vision penalties are counter-intuitive and weird because they don't correctly model vision as we know it: they give you trouble depending on the light level you're standing in, instead of giving you trouble based on the light level of the thing you're looking at. In reality I don't have trouble reading things in the dark because I'm in the dark, I have trouble because those things are.

Like I said though, they work fine when people are sharing the same light levels. They just weren't written with differing lighting conditions in mind and don't handle them well. The sacred RAW should be burned in this case upon the altar of This Could Have Been Written Better For These Cases. Rules are worth the results they produce, and here the results they produce are kinda dumb. Those who wish to apply it exactly because those are the rules can go ahead and suffer the headaches.

Drawing sense out of the ashes.

Pathfinder should probably just be modelling how things really work: darkness affects you based on what you're looking at, not what light level you're in. Accordingly, I'm making a recommendation that in mixed light levels, the RAW be interpreted for what it was probably intended to do — which just requires a small adjustment of the original RAW:

Wyrmwood brings up in comments that due to firing through concealment, firing past/through dim light introduces a 20% miss chance. This causes sense-making problems if you're on a long archery range, and a tall tree off to the side is casting a shadow across part of the middle of the range: those rules assert your target dummy now has concealment, despite still being in the bright daylight. These rules work fine for actual obstructions like black smoke, but not for light. I suggest that for the purposes of firing through concealment, don't count dim or dark squares — just count what it is you're targeting.

That produces these results, which are probably actually intuitive:

We get these results, again, whether the dim light or darkness is due to magic or the shade of an oak tree.

This spell should probably be 3rd level, not 2nd level

The issue right now is that as-written, this spell is strictly better than the Darkvision spell in every respect except for its range and duration, which is not consequential enough to keep the spell as a 2nd level spell.

It's not quite as powerful as a 6th level spell, though, like Truesight, which has a longer range and detects lots of other things than just allowing vision in darkness. So that puts a firm upper bound on the power level this spell should target.

The heightened perception check range is very significant though. Normally, when detecting a hidden creature or object, having disadvantage on Perception would confer a flat -5 penalty to their passive checks, meaning a whole lot of hidden creatures, traps, etc. would be suddenly easy to spot with this spell. Normally, to gain that kind of perception, you'd need to use the regular Darkvision spell and use a torch or some other kind of light effect to at least bring the light level up to Dim. This spell negates the need for any secondary light source, which makes it superior.