I really like the concept of rolling d20 against each other during ability checks like grappling, etc. I want the same thing for normal attacks, so the defender would also roll a d20 + (AC-10).
Would this modification make the game somehow unbalanced or create side effects on monster challenge levels?

It doesn't change much

Using the formulas I give further down we can compare the odds of hitting using opposed rolls to normal attack rolls across a wide range of Attack - (AC - 10) values: 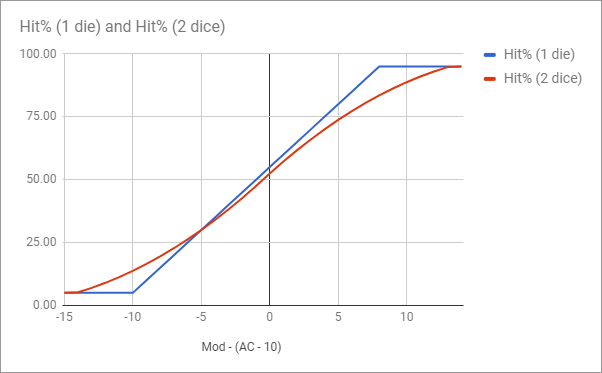 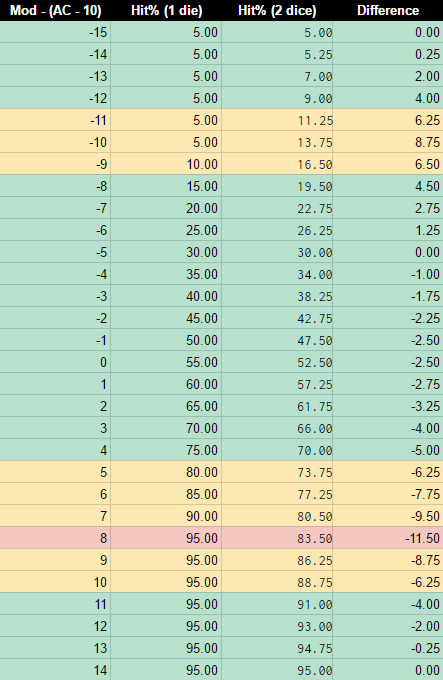 For most attack bonus and AC combinations, both methods give very similar results (within 5% of each other). At the extremes, the difference between both methods grows to 6-10%, with one particular combination (e.g. attack +8 vs 10 AC) producing a difference of 11.5%

By the time characters have attack bonuses as high as +8, they're probably not fighting 10 AC monsters with any regularity. Additionally, players with extremely high attack bonuses will probably invest in Great Weapon Fighting or Sharpshooter for extra damage, which brings their attack bonus back down.

Likewise, it's unlikely that a monster will have much higher attack bonuses than player AC because monsters don't have as many ways of boosting their attack rolls and players tend to invest into AC at least a little.

The red line in the graph can also be shifted up slightly by using AC - 11 instead of AC - 10.

On the topic of randomness...

Since dice rolls are independent events, using two dice instead of one has no effect on the outcome of future attacks. Additionally, since there's only two possible outcomes to an attack roll (hit or miss), it doesn't matter how many dice are used to determine the result as long as the probability of hitting stays the same, or close enough for your purposes.

For example, suppose you were betting on the outcome of a coin toss; there's only two possibilities and each is equally likely, so you have a 50% chance of winning.

Now suppose the game is changed to flipping two coins, and you bet on whether both coins will land same side up. There's 4 possible outcomes, each equally likely: HH, HT, TH, and TT. However, you can win with 2 of those 4 outcomes, so your chance of winning is still 50%, just like when you were flipping one coin.

If you only knew the result (win or lose), someone could change from using 1 coin to 2 coins and you wouldn't be able to notice, because your chances of winning stayed the same.

Every method of resolving attack rolls, regardless of how many dice you use, will boil down to producing hits with certain a probability. Any two methods that produce hits with the same (or close enough) probability are interchangeable. If the differences are small, it would take meticulous tracking of results across multiple game sessions for players to notice a difference.

Since every number on the die is equally likely, we can get the probability of hitting by counting the number of rolls that can hit and dividing that by the number of possible rolls (20).

Since each number on one die is equally likely to come up, every combination of numbers is equally likely when rolling two dice. Figuring out the number of combinations that result in a hit is tricky, but looking at the table of possible outcomes (taken from this answer in Mathematics Stack Exchange) gives us some insight:

(This table is for a d6, but it's not hard to see that the pattern would be the same for a d20.) When both sides have the same modifiers, the combinations that result in a hit (the > and = signs) form a triangle whose sides are as long as the table (20 rows and columns).

If the attacker's modifier is x points lower than the defender's modifier, the triangle shrinks by x units:

If the attacker's modifier becomes positive, we get a similar table:

The > and = signs no longer form a triangle, but we can count the number of < signs (i.e. the roll combinations that miss) and subtract the result from 100% instead. The formula is the same except the triangle length starts at 19 instead of 20 since we're no longer including the = signs.

The short of it is that, mathematically:

You can see that in this anydice output, which represents the two d20 methods. Click on view:graph and data:at least to best contrast the two distributions. Note how if you needed a high number on your original d20 roll, now you have a significantly better chance. And with opposed rolls, it's possible to succeed or fail on checks which would be automatic failure/success on a single die.

Now, these different options can definitely change the feel and flow of the game, but those things are pretty subjective. So I'm limiting my answer just to the math.

[RPG] How to convert D&D 5e Saving Throws into Defences

To preserve the probabilities exactly, the new DC should be "14 + monster defense."

How I got that number

So, you want to convert this:

Here's how to figure out the "??" using a bit of intuition about probability:

(This is a bit speculative because the game is unreleased, so we haven't necessarily seen all the rules, and some of them are likely in flux.)

Note that just being the one who gets to make a roll is sometimes a big benefit. For example, D&D Next playtest stuff had the concept of advantage, which lets you roll two dice and keep the highest. If defenders were previously able to claim advantage on saves, then shifting rolls to the attacker's side can make spells and monster abilities more powerful even though the raw math is the same.

Likewise, if the system features any kind of "bennies" or "action points" that you can use to enhance a roll, then shifting rolls from defenders to attackers generally makes combat faster and attacks harder to resist. Whether this favors PCs or enemies really depends on who's forcing more saving throws.