I'm getting pretty close to wrapping up a campaign where the highest damage dealing character in the party was a Sharpshooting Fighter, who in combination with the Crossbow Expert feat, was regularly dealing upwards of 100 points of damage per turn in the levels 11-16 range, not including Action Surges.

For reference, the Sharpshooter feat, rules-as-written (Player's Handbook, pg. 170), is a feat that confers three benefits:

In the campaign in question, the fighter's high damage output wasn't a problem: the campaign was designed as a generally high-power-level game, and while his damage was easily eclipsing the rest of the party, the rest of the party all consisted of spellcasters whose versatility kept them from being irrelevant—and who, under the right circumstances, were plenty capable of bursting out large amounts of damage with a well placed spell.

But, in preparations for the next campaign, I am seriously considering making an adjustment to the feat to reduce its overall power level.

My logic in making this change is that, in my experience, a single point of damage is usually still worth more, in terms of overall average damage output, than a single point modifier to the attack roll. My intention is not to ban the feat or make players feel bad for taking it, but rather to just dial back its power to make the moment-to-moment decision-making of whether to use it more important, and to make the macro-level "should I take this feat?" question less obvious.

So my question then is, what are the mathematical consequences of this change compared to the official version of the feat, and if this feat were offered at a table where you were planning to play a ranged/archery focused character, would this modified version of the feat still be worth taking or would the drop in power level make it too weak to justify taking this feat as part of your build?

For Sharpshooter, only two numeric variables matter: to hit and target armor class.

The formula for the probability an attack hits only has two variables:

Where AC is the target's armor class and HIT is the character's bonus to hit with the attack. Now, the damage die size of the weapon used can change when taking the Sharpshooter penalty is worth it, but in the question we're talking about a Crossbow Expert, meaning hand crossbow, which has a d6, so die sized will be fixed at d6 for this analysis.

The question first examines an 11th to 16th level fighter, who gets three attacks per action plus one bonus action attack via Crossbow Expert. Notably, the number of attacks per turn doesn't not affect when to use Sharpshooter. An 11th level fighter can feasibly have +11 to hit with a hand crossbow (+5 DEX, +4 Prof, +2 Archery Fighting Style). Here's how the numbers shake out for this fighter: 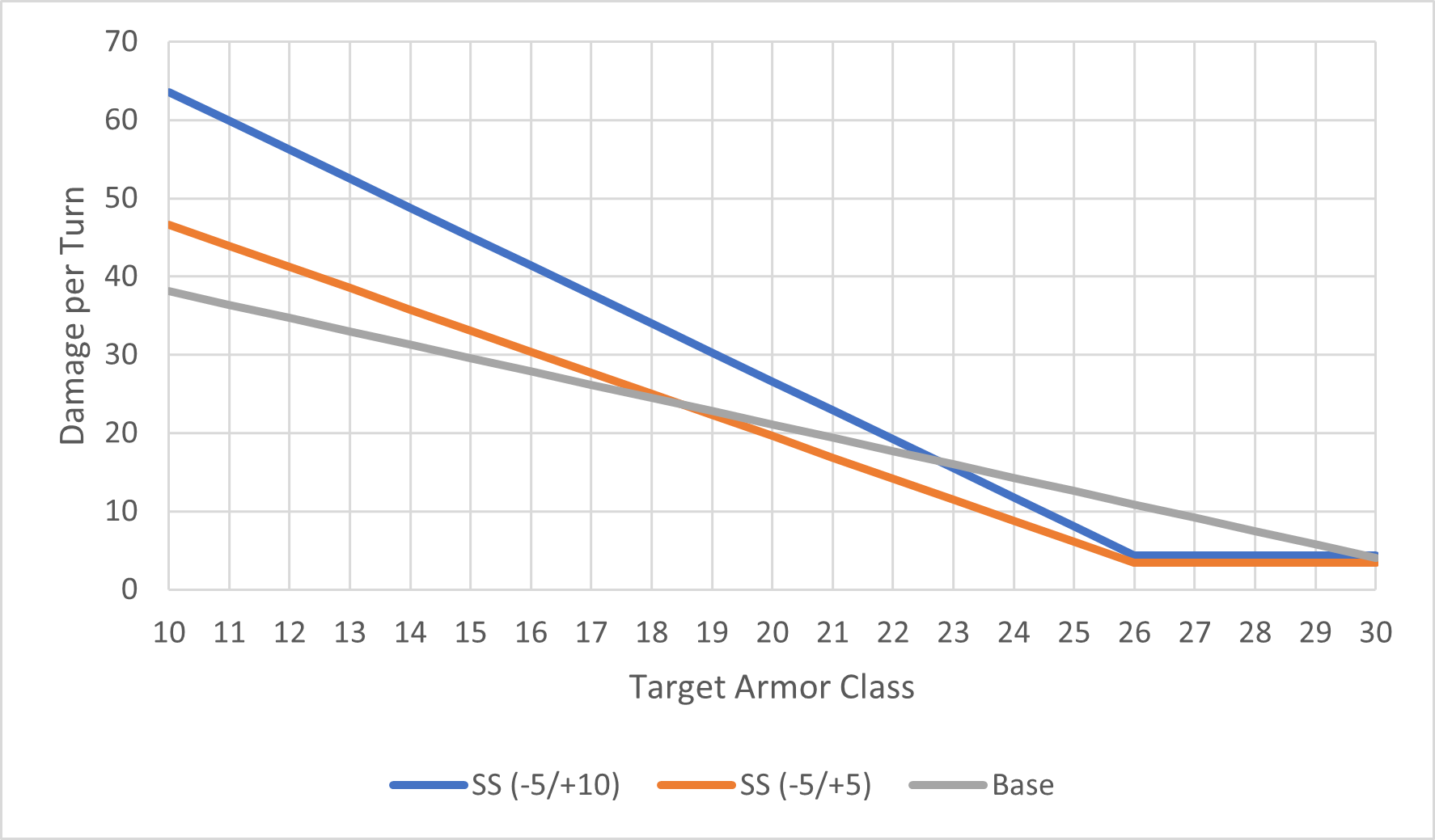 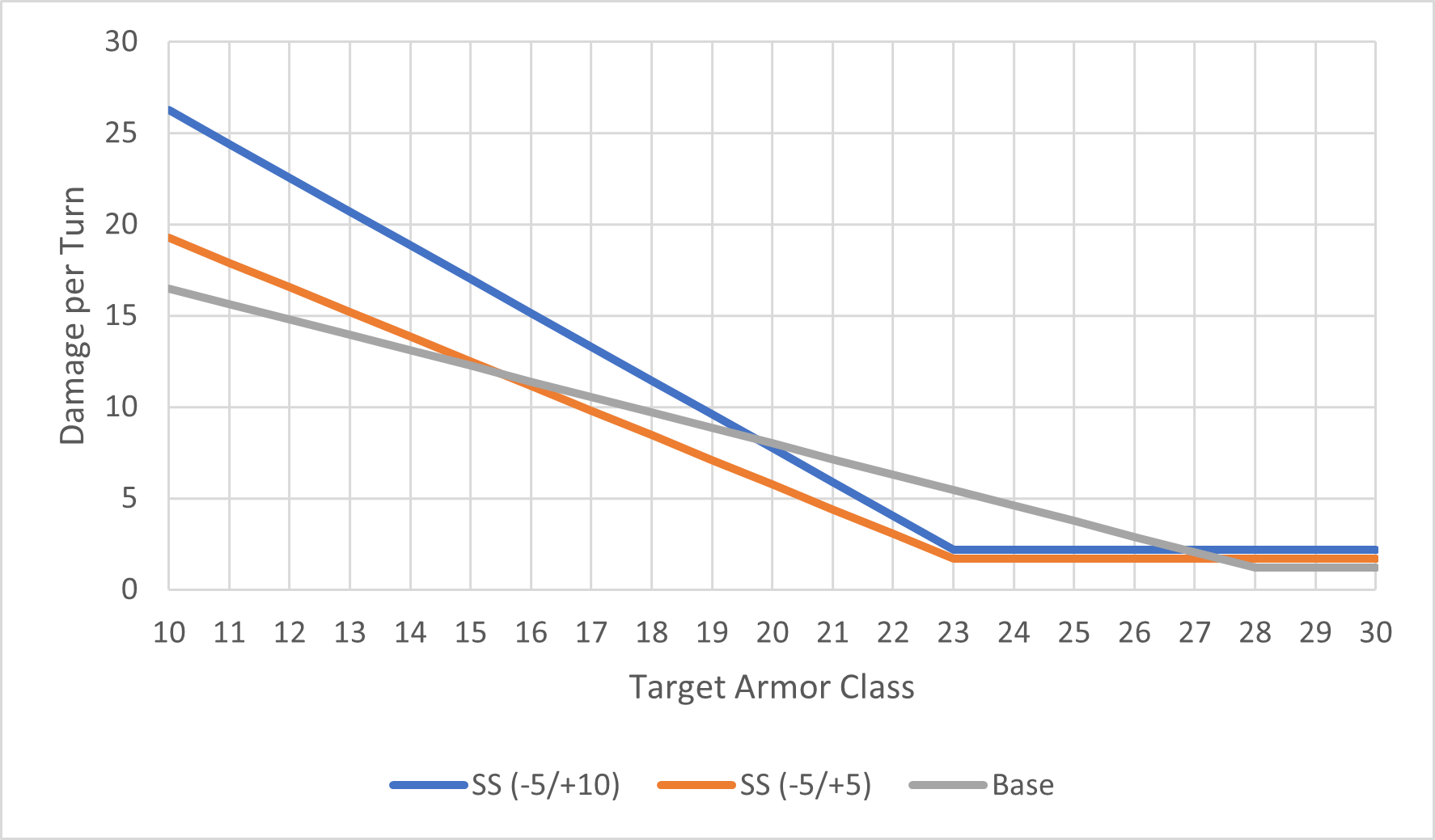 This takes Sharpshooter down a peg from "Must Take" to "Pretty Good".

That said, the other two bullets are still great features, especially for a Crossbow Expert. The vanilla hand crossbow has a measly 30 foot normal range, and Sharpshooter takes that out to 120. This feature alone makes the feat attractive for a Crossbow Expert. Together with ignoring 1/2 and 3/4 cover, and the situational damage boost makes your version of the feat still viable for Crossbow Experts, but not quite the "must have" the original version is.

To give a concise stamp on this one: probably balanced, ready for play testing.

[RPG] Is this modification to the sharpshooter feat balanced

The current edit on the question changes the answer significantly.

As mentioned by András, the Sharpshooter is already one of the strongest feats in the game. Adding versatility to it makes a feat that is already "must take" for ranged characters incredibly broken, imho.

You are making it too strong, because it is already strong.

I'll state it again to make it clear: the problem is not exactly your addition, but the fact that the feat is already strong as it is and any addition to it makes it too strong, from my point of view.

You need to add a trade-off

Instead of just making it stronger by adding another option, make it a trade-off. If you want to add another option, then you lose something on the other options. Also, you should make it in such a way that choosing between hitting only one or two targets is actually a choice.

Disclaimer: I have not tried these homebrew-changes to the sharpshooter feat, so the following is theorycrafting. I'm putting these into answer as ideas to the person making the question and to give examples of what I mean by adding a trade-off. The question itself was already answered in the previous section - no, it's not reasonable to add something to the sharpshooter feat and yes it needs more restrictions.

The changes I would make are the both that follow: (Both, not choose one)

Similar to Dual Wielding for melee fighters, a possible and easy nerf is to make the second arrow do only the flat damage, instead of the damage plus dex bonus.

The third option of Sharpshooter gets nerfed a little

To +7 or +8 damage. Honestly, it would need playtest to get to an accurate value that makes the trade-off between hitting two targets instead of only one an actual decision instad of "hitting only one is always better" or "splitting is always better when possible".

From the part of Sharpshooter (PHB, p. 170) that you've included (but with different emphasis):

Before you make an attack with a ranged weapon that you are proficient with, you can choose to take a -5 penalty to the attack roll. If the attack hits, you add +10 to the attack's damage.

You can use your action to make a ranged attack against any number of creatures within 10 feet of a point you can see within your weapon’s range. You must have ammunition for each target, as normal, and you make a separate attack roll for each target.

This describes "a[n] ... attack", so Sharpshooter could apply to each attack roll (or not2). You take the Multiattack action (not the Attack action), which involves many attack rolls, each of which could be used in conjunction with Sharpshooter.

This reasoning is based on the generic advice given in the PHB (p. 194):

2 To extend this answer to take into consideration the extra question, there's nothing about the text of Sharpshooter that implies that it must affect every attack made on this turn, but rather that it applies to "an attack". I read this to mean that you essentially get to choose before each attack you make as part of either your Multiattack: Volley action or your Attack action (with Extra Attack). As applies to the entire question - nothing about Sharpshooter says it applies to your turn or your action, simply "an attack", any attack (it could even apply to an attack you make as a reaction outside of your turn).