I have never had a problem with Druids in my games take things such as, Multiattack, Improved Multiattack, and Improved Natural Attack. However, I reached a 'scratch my head' moment whenever a player, who loves wolves, decided on specializing in wolf forms.

She embraced the whole Trip attack thing, and I fully supported her build. However, she wanted the archtypical 'intimidating wolf howl' and saw Mighty Roar, and Greater Mighty Roar in Savage Species. 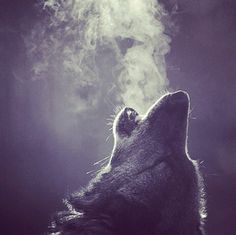 The prerequisites… Animal or magical beast. I told her, "But you aren't an animal, and you don't 'turn' into an animal, you retain the humanoid type."

Her reply was, "Well, you let me have Improved Natural Attack, and as a humanoid I have no natural attack."

She had me speechless.

Question: Does Wild Shape actually allow Monster feats mentioned above? Why or why not?

Yes, these are different things. Which is absurd, and a terrible choice on Wizards part.

These feats apply to abilities most commonly found amongst monsters or are related to monsters.

Only creatures with a monstrous form or one or more monstrous abilities may select these feats. Monstrous forms are those that are unavailable to normal humanoid and animal creatures, including but not limited to extra appendages, nonstandard appendages (such as tentacles or a tail), supernatural abilities, and spell-like abilities. With your DM’s permission, you may be able to choose monstrous feats for your character if your character acquired unusual abilities through transformation or by advancing in a prestige class.

Monster feats are from the Monster Manual and are so-called just because Wizards assumed that monsters were the most likely ones to want them; they have no special requirements and PCs are allowed to take them. This includes Improved Natural Attack.

Monstrous feats were introduced by Savage Species, and as you can see, have extremely vague and ill-defined requirements. In particular, monstrous features are “unavailable to normal humanoid creatures” but include both spell-like abilities and supernatural abilities, which are not at all unusual in humanoid creatures. Then there’s mention of being allowed to take them if you transformed or took a prestige class, but no mention of what happens if you had those features without doing so. Savage Species is not a well-written book.

Anyway, it’s pretty clear that Wild Shape probably qualifies the druid for [Monstrous] feats anyway, so long as you approve it as DM. The final issue is Mighty Roar, which has another requirement on top of being Monstrous: it requires Animal or Magical Beast type. Why the authors felt they needed another requirement on top of those from Monstrous, I couldn’t say, but they did. As you note, Wild Shape does not change type. And you are correct to make a distinction between this and Improved Natural Attack; INA does not require any particular type.

But again, Savage Species is a poorly-written book. If the druid is willing to accept that they’ll only get to use Mighty Roar while using Wild Shape, I strongly feel it should absolutely be allowed.

Elemental Wild Shape just grants access to different forms for you to Wild Shape into. As such, it's limited by all the restrictions and gains all the benefits of normal Wild Shape.

However, that is thankfully irrelevant. The text under Beast Spells refers primarily to Wild Shape, and has ancillary text that refers to Beast Shape. However, based on the text in Wild Shape, I believe that they are used in the text interchangeably and thus should be applied interchangeably for the rare case where you are not in a Beast form.

So yes, you can cast spells while an elemental using Beast Spell.

Treat this as a case of multiple speeds

If you have more than one speed, such as your walking speed and a flying speed, you can switch back and forth between your speeds during your move. Whenever you switch, subtract the distance you've already moved from the new speed.... If the result is 0 or less, you can't use the new speed during the current move.

At any time during her turn, the druid's total distance covered can be no more than her current movement speed. Wild shaping does raise her movement speed, but does not affect her accumulated movement.

In your hypothetical example, the druid moves 30ft as a human. Then she wild shapes into a bear, and now has a movement speed of 40ft. She can therefore move a further 10ft after shaping.