I'm designing a microRPG and need some help calculating probabilities so I can make an informed decision about how many coins to start with (controlling session duration and early-game frustration).

Here's the dice mechanic, simplified to just the situation I'm concerned about:

How many rolls on average will it take to get 6 coins?

How does that change if the player starts with 3 coins instead of 2?

I assume Anydice is the default tool for this, but any answer that provides similar graphs/calculations would be equally appreciated.

Below are the expected number of steps/rolls to get to 6 coins:

The best way to solve this problem in general is not Anydice, but with a tool called Markov chains. But let's start with the basic probabilities.

Hence you have the Markov chain: 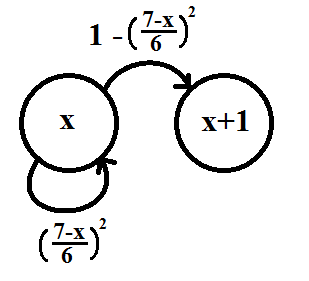 And since there are five states (2 through 6, there is no way to fall back to a previous state), this is the full chain:

Now, from this chain, construct what is called a transition matrix which describes all the state change probabilities in mathematical form.

Here, we do some math to find the expected number of steps from any state to state 6. We do this by solving the equations that arise from the transition matrix. I won't explain them in much detail, I'll just show the final equations.

Let \$h(i,j)\$ be the expected number of steps from state i to state j.

The problem is now reduced to a system of equations. Solving these, you get:

Take into account that when you pass 2d10 to Anydice, it automatically sums it. Trying to simulate what you wanted the easiest way I found, here's the code:

You can test it here.

What both functions do, is sum the three dices and then take out the highest or the lowest. Take into account that it's important to use three dices in this code, splitting the two 2d10 in 1d10 and 1d10.

Edit: Improved thanks to Ilmari Karonen

As usual with AnyDice, the solution is "write a function." Here's a simple example:

Of course, this technique can be easily extended to more than three types of dice simply by adding more parameters to the function. The trick here is that passing a die into a function that expects a number or a sequence will "freeze" the die roll, invoking the function for every possible outcome of the roll in parallel, and summing up the results (weighted by their respective probabilities). Thus, inside the function, you can just manipulate the sequences of individual dice as you want.

Note that converting dice into sequences like this is a "brute force" solution, since it ends up invoking the function separately for every possible outcome of every roll. For large amounts of dice, it can run very slowly or even time out.

In particular, if you only want the single highest roll in the pool, the solution I presented in this earlier answer is a lot more efficient: by discarding all but the highest die of each type before calling the function, the number of combinations that AnyDice must iterate over becomes a lot smaller.