I'm a new GM and I need to undestand how to build enjoyable locations.

I don't get how to build interesting dungeons. For example, I need to explore a castle. But a castle is not as complicated as the classical "maze of caverns", so it would just be a boring walk. What can I do to improve my dungeon creating skills?

For me, there are 2 main questions that you should ask yourself. The first one is "what will I, the GM, find interesting?" The second is "what will interest my players?" These are the most important questions and from them we are going to build the dungeon.

After we do that, there's one thing that should be made clear: "Where the main action in this dungeon should take place? Is it a long road filled with monsters or is it a collection of rooms, each one with its own set of monsters (or even a single one)?" If it is a collection of rooms with a few corridors connecting between them, you can practically almost skip the walking between the rooms, focusing instead on the rooms themselves. As the question is about a castle, I'll assume that we're talking about a set of rooms with monsters and the like within them, connected by corridors.

Our next question, then, is "what is the story of this castle?" The castle is not just a castle, right? It's a famous place, the source of many a legend. As such, we need to create such a legend. Let's go for a simple one, as an example: "The famous wizard Olivius created this dungeon in order to defend all of his treasures, but most of all, in order to lock the great dragon Zarius Maximus away from the village, believing he may be able to catch 2 birds at once." What does this legend tell us? That there's a dragon waiting in the end of the dungeon, that this place was made by a great wizard and as such will be guarded by many dangerous things, and that there's a great treasure there. It also gives us a reason to go nuts with what we're about to put there.

Now we implement the answers to the first 2 questions. If, for example, Robert is interested in big fights against huge monsters, we can put a giant for him. If Lisa wants to disarm a great trap, we can implement a trap that will be so thrilling that when she'll disarm it it will be remembered for ages. The trick is to put in the rooms what the group (and that includes you) finds interesting.

To conclude all of this, here's a summary of the steps you should make:

[RPG] How to turn a B*-tree into a puzzle

You walk into a giant cave, floored with clouds. There is a single golden platform, floating in the sky near the precipice you stand on, like a boat docked on the shore. Engraved on it is the arcane rune XIII. A short distance further you see your destination: another platform extending out into the clouds. 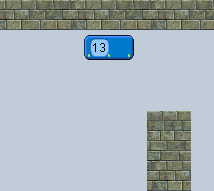 The platform is large enough for all of you and supports your weight. On it you find nearly two dozen glass bottles, each appears to hold in it a cloud, and each bears a different arcane rune, I-XI. XIII is notable absent. Upon unstoppering the last bottle, a cloud in the shape of the rune appears, and a fine silver thread attaches it to the golden platform which begins to shift. Upon opening another, "XIV", it too has a similar effect. You wait for the room to stop shifting. 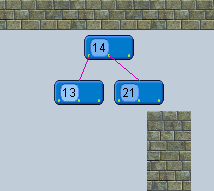 Unfortunately you're further from your goal, and only the golden platform XIII can support your weight. Placing the stoppers back on the bottles, however, sucks their ethereal clouds back in, leaving the room once again how you found it. You have an idea, though, and upon unstoppering bottles "I" and "II", you've made it slightly closer to the other side. 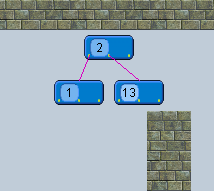 After just two more opened bottles, the platform on which you stand has gotten close enough to the stone pier for you to safely jump across. 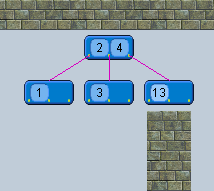 You continue on your epic quest, more glad than ever that you decided not to study computer science...

[RPG] Making epic combat interesting and challenging but not complicated

One thing my last DM did that helped at high levels (also low levels, but especially high) was to split solos into, effectively, three monsters. So a dragon might become the head, the body, and the tail; while a demon might be head, body, and arms, depending on the powers. He would divide the solo's actions up and give each piece hitpoints so that two of the pieces were equivalent to an elite monster and the third was equivalent to a standard monster. Each piece gets its own initiative and set of standard/move/minor actions, and players target pieces separately (so, for example, an assassin could shroud the head, but wouldn't get shroud damage if he then attacked the body).

You would want to adjust the specific mechanics for your own game - we tended to address issues like whether "slowed" affects one piece or the whole creature on the spot and depending on how the creature was split up - but if your aim is to reduce complexity, it would be worth figuring out satisfactory answers to common effects up front. Then once play starts you already know the answer.

It ends up being significantly simpler for the DM since you have the strength and threat of three monsters, but the abilities and powers of only one to keep track of. It also requires fewer additional monsters/terrain/whatever to build out the encounter, again reducing the complexity of any given combat. You also get the advantage that a combat against a solo becomes much more interesting, because you've got three parts of the monster moving and acting independently (preventing the solo from being pinned down and focus-fired), which again increases the fun without increasing complexity.