I am a brand new player trying to create a character for D&D 5e. I have the PHB and a character sheet and am trying to figure out how to proceed, and I'm getting stuck a lot.

I have the normal character sheet for 5e from the D&D website, but lots of the boxes make no sense to me. The character creation seems to require a lot of back and forth throughout the entire book and it's very confusing. I was able to figure out my class (rogue), and race (high elf). I found out my proficiency bonus, and did my stats, but other than that I really don't know what I'm doing. I have lots of small questions that I can't really type into google, and the index in the book has been a life saver but only goes so far. But I am left with a large number of questions I'm having trouble finding the answers to by looking them up in the index, like:

How do I get started to where I understand the rules enough to fill out a character sheet like this? There's a lot to the game, it appears, and I have some familiarity with the lingo from Geek and Sundry's Critical Role, but the learning curve seems really high.

D&D looks like a TON of fun, but I need a character first, ya know? How can I get through all these details so that I can get started?

Unlike many video or computer games, tabletop games are expected to be social experiences. Creating a character without the help of a more experienced player (or preferably, your GM) is going to be frustrating. Your first option should be to ask the rest of the table for guidance.

If everyone at the table is new, consider asking online (like you are doing now). There are many excellent guides online that talk through the character creation process in more depth.

Failing either of these, you might go to your local game store for D&D organized play and ask someone there.

All of the questions listed above can possibly be known by carefully reading the entire PHB. The entire first section of that book deals in character creation: races and classes are not all the choices you face. In particular, you seem to have missed the Backgrounds section which explains personality traits, bonds, and other things.

Compare Your Work To Others'

The PHB also includes "Building Bruenor" as an example of creating a 5E character. Each section will mention the choices are involved with creating Bruenor and how they contribute to the character. Even as an experienced player, I found these boxes helpful my first time in 5E.

You will almost definitely make mistakes. Take this character into a game with more experienced players and let them correct you. Don't get discouraged. Treat it as a learning experience.

[RPG] Help w/Character Sheet: What are ability modifiers and how to calculate them

First, for Reference, a zoomed-in segment of the 4e character sheet available for download on WoTC's site. 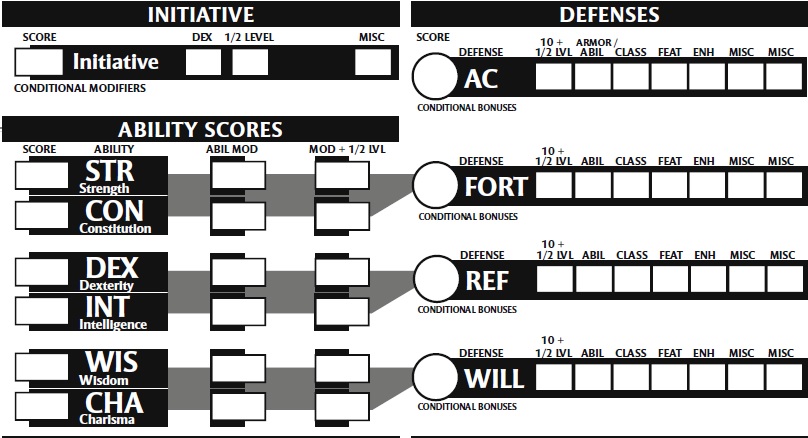 Your Stats from your Standard array Go in the Score box

The Score is the number coming from the Array (or total via pointbuy) such as 16, 12, 8 etc. By RAW rules you cannot have more than 1 stat lower than 10 and that one stat can only go as low as 8.

Ability MOD is short for Modifier. It is derived from the ability score.

When you have no appropriate skill your DM will tell you to use the Stat that most makes sense. Its simply there as a shortcut to prevent you from having to do the math when it comes up. For example your character is trying to decipher an ancient tome, History is probably the appropriate skill, but you aren't trained so your DM instead has you roll an INT check. You roll 1d20 and add your Mod + 1/2 your level number to your die roll.

Whenever something references Mod, Ability Modifier or (for example) says STR Mod it means the Modifer number only.

Filling out your defenses

You only want to put the ability mod "ABIL MOD" because in one of the boxes you are already adding 1/2 your level, the 10+ 1/2 your level box.

You would write the mod + 1/2 level number in the box on the skill section of the sheet because skills you aren't trained in by default just use the related Mod + 1/2 your level whenever you would attempt to do a skill test related to it. Again, this is here simply to save you time later.

Your human ability modifier should go in your primary ability score

Yes your # of Surges is based on your class + Con mod

Certain races & feats can give you more, but in the example you gave, yes the number of healing surges you would get is 7.

There's an apparent paradox in character creation for an unfamiliar game: to effectively and confidently make a character requires knowing the game, but to know the game you have to already have made and played a character. It's not really a paradox, but it can feel like it when you have limited time to play and want to get started as soon as possible in order to get right into the fun of an ongoing campaign.

There's a simple solution that has worked well and consistently for me, but which requires trusting that patience pays off.

What has been successful for me across RPGs is to run a one-shot demo session using the new game before we make our real characters in our real campaign. This introduces the players to the moving parts of a character through hands-on playing experience, which gives them a basic understanding of what's important when making characters. This can also effectively introduce the players to the setting and playstyle that they will be making characters for later.

Whether the demo characters are pre-made or made by the players doesn't seem to matter. (If they know these are throw-away characters, they don't suffer nearly as much analysis paralysis in making their own.) What matters most is that the demo session gives them an experience that reflects the realities of play that should be informing their character creation choices.

For example, in a game where understanding the skill system is critical for character creation and evaluating character effectiveness (RuneQuest 6), I have run an "obstacle course" session where they made characters and then played through an in-setting coming-of-age trial that involved a lot of skill use (but no combat or risk of death). By the end, players had a visceral understanding of what was and wasn't a good skill rating — one player initially thought that 35% was a good skill and spread their points around to hit that number in as many skills as possible, and came out of the demo realising that she'd underestimated that by half and that choosing a few core skills to maximise first, before spreading the other points around, was key. They all also profited from the crash course in the cultural context they'd later be playing in.

In another game where the interplay of character creation choices and combat is a big deal (Savage Worlds), I had them make one-off characters and then threw them into a dungeon that I knew well enough to run on-the-fly. They had the freedom to go where they wished and test their characters in a variety of non-combat and combat situations. As a result, they got a good sense of how the game functions overall and in its combat, magic, opposed skill, and healing subsystems in a very short time, and were confident making characters for the longer-scale fantasy campaign we later kicked off. Notably, when we started that campaign we had a new player, who had a much harder time creating her character than the ones who had the demo session initiation.

In both these examples, taking the time to give the group early hands-on experience with characters and the system meant that the players were confident and quick in future character creation for the real game. The difference was like night and day: where before they were lost and stumbling through the options, afterwards they were focused and dove into the chargen process with clear goals in mind.