In many games I GM, corruption plays a big role. Either in my fantasy games with a church with a firm hand on the king or dystopian future like Shadowrun. Almost every time in my games, corruption is obvious and you can easily spot it. Mostly because I'm not sure how to drop clues of a corrupted system without being too obvious about it. I'm looking for symptoms of a corrupted society and how to include them in my game without necessarily involving the characters directly.

For instance, I already got them arrested after they publicly mentioned their disdain for the Pope. I'm looking at different approaches. Maybe a way to get NPC or the news carry the message. I'm just not sure what would be an effective way of doing so.

I'm looking for techniques that can be effective in any settings or examples that can apply in both modern and fantasy settings.

Corruption isn't obvious in "liberal" societies. This answer is firmly situated in the western idea of corruption, best illustrated in House of Cards (BBC 1990). Obvious corruption tends to get corrected, as it has no shadows to hide in. The best signs of corruption are the fact that everything is too polished.

An effective corrupt institution will operate on personal power, good ol' boys networks, and other exclusionary and opaque power schemes. Everything appears normal to the punters, but it should be impossible to exercise power without being part of the club. 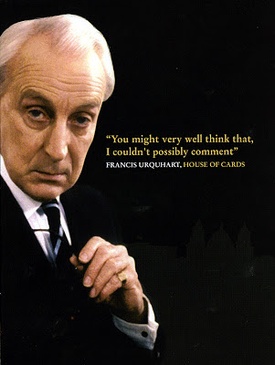 So, the public arrests for dissent or lese majesty aren't corruption, they're a rather ineffective police state. A corrupt state will quite happily tolerate outsiders who complain, as they're a useful lightning rod for the disenfranchised.

Justice by friendship: It's all about who you know and who you are

Consider instead, how corrupted bureaucracies corrupt people. You can only have corruption where there is nominally a strong rule of law. If there's no strong rule of law, you have anarchy and despotism instead.

In a corrupted world, it's all about who you know, and what you have on them. (Go watch the BBC's original House of Cards to get a feel for how that looks behind the scenes.) If you're an up and coming power, the first clue that you're "part of the machine" is an implicit requirement for patronage. When the party interacts with people, there should always be a sense of "what do we have on them?" and "who is backing them?"

As such, one of the obvious things to do is to enable blackmail. The trick here is to set up the ability for characters to choose to be compromised by exercising their various lusts (in whatever fashion.) For a lust for power, set up a mutual backscratching. For a lust for... love, make everything go perfectly well. (and so long as they don't piss off their blackmailer, everything will continue to go perfectly well. When they start making waves, the quiet conversations and the quiet threats will start.

Trust is leveraged ultimatums: the ability to threaten certain harm

In a corrupt world, the only basis for trust is leverage. Therefore, their first quests should be on behalf of a low-power functionary gathering leverage on other low-power functionaries. It is critical that all of these actions be disguised behind pious platitudes, as barring Captain Louis Renault, few people are open about their corruption.

Have the characters observe a culture of gifts of little red envelopes. It should always be easier to bribe your way in than to fight. And, of course, as above, so below. Need to get past a gate guard? Bribe him. Or, better yet, know his pressure points. And, as ever, show, don't tell. Players should be taught this through observing other people, and by getting assignments that stink of corruption.

On the Nature of a Corrupt Society

In many ways, subtle corruption is a private violation of social norms for personal gain. Consider Plato's Ring of Gyges allegory. This is exactly what players should encounter. To be clear, we are discussing corruption in non-failed or hollow states. Personal despotism, autocracy, and oligarchy all present their own possible modes of corruption (however dressed up they are in democratic principles).

While it would be impolitic to quote the entire SEP article on Corruption it is required reading when discussing the nature of the thing, as many of these answers, (mine included) have focused on public, rather than private corruption:

In fact, corruption is exemplified by a very wide and diverse array of phenomena of which bribery is only one kind, and nepotism another. Paradigm cases of corruption include the following. The commissioner of taxation channels public monies into his personal bank account, thereby corrupting the public financial system. A political party secures a majority vote by arranging for ballot boxes to be stuffed with false voting papers, thereby corrupting the electoral process. A police officer fabricates evidence in order to secure convictions, thereby corrupting the judicial process. A number of doctors close ranks and refuse to testify against a colleague who they know has been negligent in relation to an unsuccessful surgical operation leading to loss of life; institutional accountability procedures are thereby undermined. A sports trainer provides the athletes he trains with banned substances in order to enhance their performance, thereby subverting the institutional rules laid down to ensure fair competition. It is self-evident that none of these corrupt actions are instances of bribery.

Therefore, when creating a setting, take a lesson both from Plato and the SEP. For our purposes, a corrupt act is the ultimate hypocrisy: social gains from public virtue while private gains from the denaturing of that virtue. A corrupt official who admits he takes bribes isn't, functionally, corrupt. By publicly changing the rules of the game, he isn't benefiting from the appearance of virtue; he's taken off the ring of gyges. Without getting into Baudrillardian simulacra presenting players with a corrupt society first requires presenting them with a virtuous society.

Showing Corruption in Your World

Let us presume that the characters are strangers in a strange land. Translating between character and player knowledge when dealing with subtle clues is remarkably difficult. (As an aside, if your characters are from the corrupt society, just spell it out to them, as part of their character knowledge of the world.)

Hint at the culture of corruption via including it in skill success outcomes. If the characters are trying to get in somewhere and just blindly roll a diplomacy-equivalent, note how a small "handshake" with gratiutiy palmed smoothes things over (and just grant the currency transferred as a freebie, since the players didn't initiate the bribe.) With character background knowledge (rolling to figure out who X is) always make sure to describe their "good friends" and patrons. And so on.

Enable corruption. Make sure that, when starting out, if the players choose the corrupt path, they succeed. Don't state this pre-judgement, but players will notice details like this quite quite quickly. And once they've done something that gives someone else leverage, the doors open, and the quiet conversations begin.

At the end of the day, in a corrupt society, the only true sin is embarrassing those in power.

The central tenet that must be hammered into the characters heads (best with spikes) is that there is only a single sin. It's not "getting caught" (as with corruption, getting caught simply leads to greater trust..) It's getting caught embarassing those in power. The way to victory is to remove those more powerful than you by embarrassing them via a useful idiot. So long as they have leverage over you and are aware of your actions, the only thing you cannot do is make it so that they no longer want to protect you. It is this hidden and secret despotism that makes corruption so evil: there is no appeal to your blackmailer nor to the court of public opinion. There is no ability to rehabilitate yourself (save via an act of grace of those in power). If you don't do what they say, they can use the organs of the state to destroy you. If this theme isn't the central conceit of the campaign, make sure to show other people destroyed, rather than enmeshing characters in the villains machinations.

[RPG] How to DMs effectively telegraph specific dangers in D&D

The single-most overlooked, in my experience, is evidence of deaths.

It's a dragon? What's it been eating? Few creatures actually eat EVERYTHING, so what's left by the dragon? Oh, there's an owlbear's beak and claws... there's mangled bits of what used to be +5 plate... (see those runes, there, there and there?) A broken longsword. Dead mind flayers.

And don't forget the massive piles of poo.

Also overlooked: Tracks for Numbers and size! Sure, it's a dragon lair. But its a lot different when the dragon's "wheelbase" is 20x5 vs 80x20...

And don't pull any punches at low-levels. If you're going the route of the "killer GM," go ahead and use that medusa as the boss of dungeon level 1. Served by myconids... (Plants are immune to Medusae gaze). And all kinds of statues... birds fallen from the sky... small critters, big critters... "Hey, isn't that Fred the town Bully? So that's what happened to him... hey, there's my missing purse!"

[RPG] How to more effectively use darkness in a dungeon

An important difference between a torch and a flashlight, which you noted, is a torch is omnidirectional. What other omnidirectional sources of light are people familiar with? Campfires. Ever sit at a campfire on a dark night and look into the woods? What can you see? That's right... squat. A torch, unlike a flashlight, is always in your eyes. It's impossible to keep your night vision. Any space it does not light up will be pitch black. A great movie to watch for ideas is The Burrowers, a kind of Lovecraft/Cowboy/Horror movie.

Same goes for continual light and most every DnD light source except maybe a shuttered lantern, and since when do PCs think to pay for those?

So keep this in mind when determining what the PCs can see. They can see 20 feet away, 20 to 40 feet is indistinct, colorless. Beyond that is pitch black. You may even want to lessen the typical radius. This means they can't see down corridors. They can't see into the next room. If the non-torch bearer pokes their head around a wall they can't see the thing about to rip their face off.

Hollywood, and ubiquitous illumination, has trained us to think that dark isn't very dark. Indoors is pitch black. Outdoors totally depends on the phase of the moon, so keep track!

Racial night vision? Blinded while the torch is lit. Doesn't matter what the rules say, just make it so. Now the PCs have a motivation for putting the torches out and leaving the poor humans blind.

Torchlight carries way farther than the torch bearer can see, and you see the torch bearer distinctly from far away. This will attract lots of "fun" things. Smarter monsters can even use this to their advantage, seeing the PCs coming from far away, probably noisily talking and clanking, they can set up an ambush. Maybe, with no warning, spears and arrows fly out of the darkness! Punish the PCs for being so visible and so blind.

Torchlight, unless you're right up close to something, doesn't let you see very well. When a PC without their own light source is examining something, make the description indistinct. Make them want to get their face in real close to have a good look. Maybe brush their hand over it. Best way to find out it's a green slime. :-)

Things can hide in the darkness, but not always monsters. Pickpockets, spies, poisonous insects... all sorts of creepy crawlies can take advantage of the PCs being A) nearly blind and B) totally lit up.