I've been playing table top RPGs for some twelve years now, both as a player and a frequent DM. During this time, I've had maybe half a dozen campaigns and none of them have been particularly accurate in regards to timeline and time management.

The problem revolves around keeping track of the smaller time frames in which events occur and, in extension, what else would occur during that time.

The bigger timeline (Year 2000: A happened, Year 2050: B happened, and so forth) is quite easy to keep track of, since most campaign (at least the ones I've played) take place within a year or so. The problem I have is keeping track of the day-to-day timeline.

The PARTY sets off by foot from TOWN1, through the FOREST, before intending to reach TOWN2. This journey is estimated to take one week. Now, before they left TOWN1, the WOODELF sent a message via raven, asking his siblings to meet up with them in FOREST. Furthermore, two nights before leaving, PARTY burglarised a corrupt ARISTOBRAT and stole THINGY1. ARISTOBRAT wants THINGY1 back and has sent out nationwide messages, alerting local authorities of the theft and PARTY's description.

Halfway through FOREST, PARTY is ambushed by a band of villains, resulting in a long (play-time-wise) fight and once PARTY is victorious, the GROUP decide to call it a night.

Next time GROUP gets together, it's hard remembering how long the journey was going to take, how long PARTY had been travelling for, how long the raven would take to get to WOODELF's siblings, when ARISTOBRAT's message will reach various cities and holdfasts and what the result of that may be. The timeline, and thus potentially the campaign, gets messed up.

Is there a quick, easy-to-use and flexible method, application or other service that can help me keep track of the timeline of a campaign? 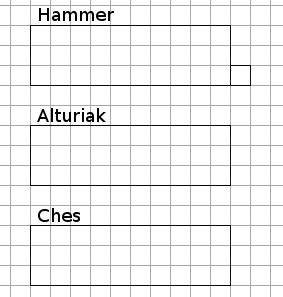 Usually one doesn't count the total rounds of a combat just to do it. You might be counting them because of spell durations or other specific reasons. In general you're concerned about overall passage of time because of torch and other large scale durations, which is why this rule exists, so players don't say "well that only took three rounds so we move on and our spells and stuff keep going till the next encounter right! And that's only .03 of my torch duration, right?"

A simple time tracker may be what you need. I use this method in my Dungeons & Dragons games and it helps immensely. Basically, you take a sheet of grid paper and make a list of the different time intervals that you use within the game. For D&D (v3.5) it is ROUNDS, MINUTES, TURNS (this is a holdover from earlier editions that I use, but is not included in the Rules as Written; a TURN lasts 10 minutes), HOURS, DAYS, WEEKS, & MONTHS.

You don't have to keep track of everything in 1 ROUND increments, though. If it takes twenty minutes to go from point A to point B, you simply check off two TURNS. I hope this is helpful to you.