I've made a map for my D&D game. But I forgot to consider its size and how long it would take to travel over it. How can I determine the size of my map? Someone guessed that it might be the same size as Texas. 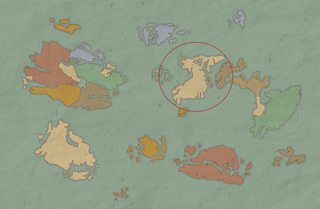 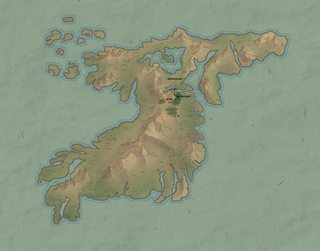 I mainly need to understand the size of this island. The planet's size is the same as ours. If you zoom into the bottom picture, you'll see a small person figure, and further up a red , star with "Ramor." I feel like the travel to Ramor should take around 2-3 days. But I may be making an error in scale, and it may take a whole week instead.

There's nothing about the geographical features of the map that could be used to objectively determine a “right” scale for either map.

So instead, decide practically: pick two points on the map and decide how long it would take to travel via a given type of transportation. Work backwards from that to determine the distance. Measure that, and translate it to a map scale.

For example, if you decided that travel on foot between Ramor and the crossroads just north of that little person icon in the second map takes half a day, and in your world travel on foot is at approximately 24 miles per day (include rest stops, etc.; see DMG p. 242), then the distance of that section of road is about 12 miles. At ~47 pixels, that gives us a scale of about 0.25 miles per pixel. That makes the continent with Ramor on it about 195 miles north-south, 270 miles east-west, or 330 miles on the long diagonal. To add a scale to your second image, then, draw a line about 40 pixels wide and label it “10 miles”. Then scale up for the world map: since the zoomed-in continent is about 1305 pixels diagonal and it's about 309 diagonal in the world map, your maps have a scale ratio of about 4.22. So on your larger map, the scale marker could be 95 pixels wide and labelled “100 miles”, assuming that you decided that original measurement takes a half-day on foot.

[RPG] How large is Waterdeep

Or ~20,000 feet north/south and ~8,000 feet east/west. Both measurements were done along the greatest straight-line dimension of the city. This measurement is done by measuring the space between the walls of Waterdeep, so it includes the enclosed section of the harbor to the south.

This was derived from the map provided in the 3rd edition book City of Splendors: Waterdeep, which actually includes a scale. A copy of this map can be found here if you would like to make more precise measurements of distances between things.

Thus, with no contradicting evidence, it's probably a fair assumption that the 3rd edition scale of the city is accurate.

[RPG] How to figure out a creature’s weaknesses

However your table wants

Is it more usual to ask the other players 'out of character', or is it more common to roll some kind of in-game check to identify the creature?

Yes, it's usual and yes, it's common. And unless you poll every group that's ever played (or at least a statistically significant sample - PhD anyone?) you won't know which is more frequent. Look, some people like to create deep and complex worlds where each session is a new revelation and some people just like to chop things into mincemeat - you do you, ok.

I hate that word.

For a start it has two meanings:

Its a game of make-believe elves in a made-up world using rules that cannot be anything but the most abstract model of non-reality!

I cannot for the life of me see that rolling a d20 to see if you "hit" is not metagaming1 but claiming that your character, who supposedly grew up in a world where vampires are real, knows that sunlight hurts them isn't. Hell, vampires aren't real in this world but everyone knows your best defense is a garlic-wrapped wooden stake!

Basically, it's offensive metagaming if it breaks your table's verisimilitude and it's ok metagaming if it doesn't. So, you and the people you play with need to set your own boundaries on this, just like you need to decide how naked you can be while you play.

Of course, you can and should mix and match - trolls are common so everyone knows about fire, but kdsja2 are rare, so only the most arcane tomes and learned sages know about their vulnerability to tulip bulbs.

1In the second sense - it clearly isn't in the first sense because that is the game.

2Don't bother looking for kdsja, I just made them up.