I was reading the Player's Handbook I of D&D 4e and couldn't find any mention of grapple.

How does grapple work, if at all? Please give examples.

There is no concept of grappling in 4e.

The concept is replaced with the grab action which inflicts the grabbed condition. Which is defined thusly:

Breaking a grab is accomplished by spending a move action to attempt to escape, being pushed pulled or slid out of reach or by teleporting out of the grab. Escape attempts vs monsters are either set by a DC (can be different depending on whether athletics or acrobatics are used to escape), or by the monster's defenses (Fortitude for Athletics, Reflex for Acrobatics). When a PC grabs there is no DC and the character's defenses are used.

To update this to actually answer the question as now posed:

The basic action to grab someone is a standard action in which you make a strength attack against your enemy's Reflex. You are required to have a freehand, and your enemy cannot be more than one size larger than you. If you hit then you are grabbing your enemy. You may sustain this action with a minor and it may be sustained until it is escaped, you choose to release it as a free action, or you are rendered incapable of taking opportunity actions (dazed, stunned, unconscious, surprised, etc) Or you move away from the creature you are grabbing.

There are a few more rules related to the grabbed condition, but this is most of the stuff you need for play.

[RPG] Can a horse start a grapple

Yes, a horse may grapple. 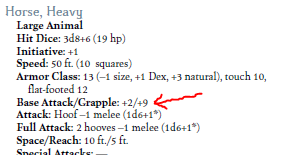 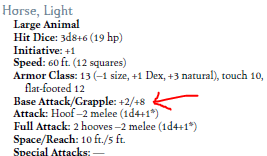 Horses have a grappling score, there aren't any special requirements excluding them from being able to grapple, and there's nothing saying horses can only react to grappling. The grapple rules, even employed literally, require a grappler to grab and then be capable of holding their opponent - the horse can do this (beginning with its mouth), so it passes.

All in all, a horse may grapple, because there is nothing mechanically preventing them from doing so.

Furthermore, the first paragraph of the Grapple entry in the 3.5e PHB:

Grappling means wrestling and struggling hand-to-hand. It’s tricky to perform, but sometimes you want to pin foes instead of killing them, and sometimes you have no choice in the matter. For monsters, grappling can mean trapping you in a toothy maw (the purple worm’s favorite tactic) or holding you down so it can claw you to pieces (the dire lion’s trick).

Holding you down purely with body weight is a perfectly legitimate grappling tactic. As @BESW mentioned, a horse can stand on you, and from there, instead of clawing you, it can stomp on you.

[RPG] Can you use spell-like abilities in a grapple

Yes you can use them, but you would have to make a concentration check or lose the usage.

According to the SRD on SLA:

A spell-like ability has no verbal, somatic, or material component, nor does it require a focus or have an XP cost. The user activates it mentally. Armor never affects a spell-like ability’s use, even if the ability resembles an arcane spell with a somatic component.

And then under their section for Grappling:

You can attempt to cast a spell while grappling or even while pinned (see below), provided its casting time is no more than 1 standard action, it has no somatic component, and you have in hand any material components or focuses you might need. Any spell that requires precise and careful action is impossible to cast while grappling or being pinned. If the spell is one that you can cast while grappling, you must make a Concentration check (DC 20 + spell level) or lose the spell. You don’t have to make a successful grapple check to cast the spell.