A bit of background; I'm a new GM to two players, one of whom played a bit of 3.5e and 4e while the other is a complete newbie. The veteran is used to knowing when creatures are "bloodied", as per 4e, and frequently checks in with me as to a monster's status. The second player often asks how much their attack seemed to hurt the monster.

I find that because I have direct access to their stats I tend to forget that my players need more information, and then abruptly throw in something like the following, which feels stilted and out of place by the 19th time I've used them;

Usually this happens around the 10-20% health left mark, which feels too late to give a good sense of the non-fatal injuries they've sustained, but is also too soon for the "it's almost dead!" when it could still be 2+ rounds of combat before the monster is dead. I do describe per turn how messed up they're getting under my players' attacks, but I feel like there's no overarching sense of continued damage.

What can I do as a GM to improve my description of injured enemies? I'd appreciate getting both a sense of how often to describe their status, as well as some examples of language I can use to make the descriptions feel more natural and less scripted.

To be clear, this isn't a question about statting my monsters or balancing their health. I'm just asking how to be more transparent about their health status to my players.

You can add in some injury flavour according to what you've already described on that target, so no giant cuts if everyone is hitting it with hammers.

As the target takes injuries, I describe them according to where on the chart they currently are, and where the damage would make them fall to.

Note that you'll have to adjust your descriptions to make sense for your target. A slime may begin looking like it's form is struggling to hold together, or large pieces have been cut or smashed off of it, for example.

It's perfectly normal for players to ask for updates, as the players don't have the health numbers in front of them, and is not necessarily reflective of poor narration. It's easy to forget which bad guy was injured, and how badly they were hurt in between turns.

As for how often to describe, whenever the players ask for a battlefield summary (to try to decide who to prioritize) you should give a health status on each creature. You're their eyes into the world, so describe what they see whenever they ask. Additionally you should also describe the status whenever they drop a tier or more, so it clearly indicates the full effect of the blow. Use the descriptions of their attacks to help narrate this tier transition.

Your sword finds its way around the Hobgoblins shield, cutting a large gash up his chest, he clutches it for a moment and is looking quite ragged and breathing heavily.

You don't need to know the damage roll or the Hobgoblins hit points to know that attack did a number on him, and that he's now quite injured, to the point a follow up may kill him.

Possibly, depends on a few specifics

What it sounds like you're doing is a style of railroading "Illusionism" (as pointed out by firedraco in the comments). This is essentially presenting a false choice in front of your players, when no real choice exists.

Why did I say possibly? Because there are a few specifics you can do when you run the game that make this method a time saving preparation tactic that doesn't invalidate choice.

For instance: If your players decide "Hey, that mansion we've found looks boring/scary/whatever, let's go down the other path," do you force them to stay at the mansion? Do you quickly swap fluff differences (Ok, the mansion is now a cave complex, the skeletons inside are now in the cave)? If the answer to these is yes, then you're definitely railroading.

On the other hand, if your players come upon the mansion and then they say "I don't want to go to the mansion" do you instead say "Ok guys, I need ten minutes to prepare the area down the other fork, you caught me with my pants down"? Then you aren't railroading, you're respecting their choice by allowing something meaningfully different to happen.

Blind Choice is no choice at all

That is to say; a choice between a road or a forest doesn't matter if there's no meaningful information about what lies upon the path or at the destination. Since it's a road or forest, you could easily say "Well, the road is well trafficked and speedy, but bandits hit there often. The forest is safer and has basically no risk of bandits, but there are weird creatures there..." Then you've provided the information to make said choice meaningful.

Oh yeah. Players get a sense for railroading when they're continually presented with blind choices, particularly blind choices that always lead to the next step in the "plot". They may not say anything because they're being polite, or they're enjoying the game anyway, or any other number of reasons. You aren't going to fool them, at least not for very long.

I highly recommend Courtney Campbell's series on the quantum ogre, the first one being here.

How to avoid railroading?

Well, some players don't actually mind railroading, at least not the nice kind that puts them on the plot where they feel involved and not the hamfisted kind that arbitrarily says "you can't do that". If your players are like this, you've really got not too much to worry about (except that they might expect you to provide all the life and effort, which will suck).

On to how to avoid railroading (Macro-Scale): Have an area map. Put a few cool things around the area, along the road, in the forest, whatever. When your group comes to the fork in the road, you'll know there's at least something along both paths to be interesting. Provide information about areas. A lake with an underwater city of evil frog men that invade the nearby villages can be as simple as a paragraph of description or less. Learning to be comfortable improvising off the bit of information linked to each area (and then adding that info to your notes) is one of the best things you can do to improve as a (non-railroady) DM. You don't need (or want) a prepared, defined plotline as a non-railroading DM, since plotlines are often easily destroyed or subverted by the whims of the players. This doesn't mean you can't have a loose plot with characters, just that it's going to get sent in wildly different directions when you let the players play and you'll have to not get attached to any specific direction.

(Mirco-scale): You say you include one puzzle and one combat encounter per area? Try making a small but non-linear dungeon instead. From The Alexandrian's Jaquaying the Dungeon: 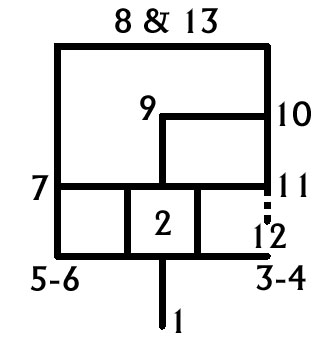 The lines are linear paths that can be taken (including lines of rooms + hallways). Note how the paths loop in on themselves, allowing for backtracking, exploration, and the ability to skip stuff. If your players are curious and engaged, they'll appreciate this ability to skip around encounters and puzzles, and they might even backtrack and explore when they don't have to. Don't be surprised if they don't, either, but missing content is part of the risk of free choice. If you need a boss encounter to happen, just put it as a linear path at the back of the dungeon, that all optional paths will connect to.

None of this is comprehensive, but hopefully this helps you out and gets your mind spinning with ideas.

There is nothing wrong here if the DM decides to show actual Hit Points as numbers. See DMG, page 247:

Tracking Monster Hit Points
During a combat encounter, you need to track how much damage each monster takes. Most DMs track damage in secret so that their players don't know how many hit points a monster has remaining. Whether you choose to be secretive or not is up to you. What's important is that every monster's hit points be tracked individually.

If you decide to describe the HP loss instead, use the Player's Handbook, page 197:

Describing The Effects Of Damage
Dungeon Masters describe hit point loss in different ways. When your current hit point total is half or more of your hit point maximum. you typically show no signs of injury. When you drop below half your hit point maximum, you show signs of wear, such as cuts and bruises. An attack that reduces you to O hit points strikes you directly, leaving a bleeding injury or other trauma, or it simply knocks you unconscious.

Remember though that Hit Points are not Health. A creature with some Hit Points lost is not necessarily injured.

Talking about AC and other statistics, that generally depends on the character. Is this kind of creatures familiar to him/her? You also can call for the character's knowledge check, to see if he/she knows about this particular kind.

In the fight, GMs often give hints about To Hit and AC like "you've barely hit it". Nothing prevents you from revealing actual AC after a couple of hits (or right from the start, if you think it is necessary).