We're playing a campaign at level 6 and I have a +1 moontouched flametouched silvered rapier and 19 dexterity.

Is there any way to make it more likely to hit or do more damage? I want to improve it as I know how easy it is to miss, having an AC of 23 myself.

Is there any way to make it more likely to hit or do more damage?

Gain advantage, halfling luck (you didn't mention your race?), portent dice, precision dice, bardic inspiration, a bless spell, and many, many others.

Improve your Dex by mundane or magical means, improve your proficiency bonus by leveling up, or improve the bonus on your weapon--probably by finding a new one.

Improve your Dex by mundane or magical means, rage (though depending on your str-dex differential that may not actually help), improve the bonus on your weapon.

But most of all, improve your communication

Given that you're at level 6 and have a moontouched flametouched silvered rapier +1 and somehow you've got an AC of 23*, I'm going to go out on a limb and either say that your game features plenty of homebrew or just lots of magic. Both of which are fine, but both of which are heavily dependent on your GM's largesse.

They're the one you should be asking this--for all we know there's a +3 bracelet of hitting more with rapiers lying around somewhere, just waiting for you to quest for it.

Or you've got a class feature that allows you to add another stat to AC? But those features come with limitations on armor, still leaving you a shortfall.

What's my point? There're clearly a bunch of magical items bumping up your AC. Which brings us back to the earlier point about GM largesse. You seem to be in a Monty Haul campaign, so just talk to your GM and try to steer the flavor of the hoards you're running across.

[RPG] What are the best enhancements for a rapier

If your PC has been taking feats like Favored in House (ECS 53), and Least Dragonmark (mark of finding (ECS 64)) (ECS 53), and Skill Focus (Bluff) (PH 100) so he can better make Seduce to Learn Secret checks while the other PCs have been specializing in monster murdering, and they realize you aren't contributing much in a fight, explain that you'll need their help. As a swashbuckler (who doesn't cast spells) you were going to need it anyway. That's not an insult but a fact of mid- and high-level play.

You'll need their help because the first weapon special ability you add to your rapier is spell storing (DMG 225) (+1 bonus). No other weapon special ability scales for damage as well as it does because it scales with your party, one of whom should be happy to refill your +1 spell storing rapier free of charge at the end of a slow adventuring day. If you must fill your own tank, take ranks in the Use Magic Device skill and load your +1 spell storing rapier using a wand of combust [evoc] (SpC 50) (2nd-level spell at caster level 10) (300 gp/charge) or a wand of vampiric touch [necro] (PH 298) (3rd-level spell at caster level 20) (900 gp/charge) or a wand of another spell that the Comments will inevitably suggest.

If you are confined to the Dungeon Master's Guide for your weapon, the only other serious choices for damage are the weapon special abilities bane (DMG 224) (+1 bonus), picking whatever the DM's throwing at you a lot, and holy (DMG 225) (+2 bonus) or, y'know, unholy (DMG 226) (+2 bonus) if you're an evil swashbuckler: a lot of your foes will be evil (or good) anyway; punish them for it. If chasing just damage buy the weapon special abilities magebane (CAr 143-4) (+1 bonus) and vampiric (MIC 45) (+2 bonus) if allowed.

Although others may disagree, most of the other damaging effects from the DMG and elsewhere inflict energy damage that a high level creature's energy resistance will easily absorb, employ effects high level foes are often immune to (e.g. ability damage and ability drain, critical hits, negative energy effects), or have saving throw DCs that are too low to be viable.

Effects That Don't Inflict Damage, But Take a Look
The weapon special ability dispelling (MIC 33) (+1 bonus) et. al. will make you popular with your group even if you aren't inflicting a lot of damage. The same goes for the weapon special ability revealing (MIC 42) (+1 bonus), which eliminates miss chances for your party; in high-level play miss chances are commonplace, and everyone will thank you even if you hit only once.

The elemental power weapon special abilities from DMG2 254-5 et. al. range from a +1 bonus to a +4 bonus and permit summoning of an elemental of increasing size based on the bonus purchased. Being an elemental-summoning swashbuckler may sound strange, but the value of minions with cool powers can't be overstated--ask any necromancer.

I don't like abilities that allow saving throws nor do I like abilities relying on critical hits, but the weapon special ability prismatic burst (MIC 40) (30,000 gp) is an exception to both. The flat cost means it's possible to add it to a weapon that's already full of other bonuses. The weapon special ability sending (LE 152) (+4 bonus) is also valuable, despite only activating on a natural 20 and a successful critical roll; a no-saving-throw teleport effect versus a high-level foe is more likely to remove him from battle than almost any other effect, although by the time this is avaialable most foes should have a way of returning to the battlefield shortly.

The weapon special ability Keeper's fang (ECS 266) (+4 bonus) renders creatures you kill with the weapon unable to return from the dead via the spells "resurrection, raise dead, reincarnate, or similar effects"; the weapon becomes evil and makes you look like a jerk to some folks, but this is such a powerful ability in any typical Dungeons and Dragons campaign that its utility can't be ignored.

A weapon made from morghuth-iron (AE 14) (+4,000 gp) is constantly naturally poisonous, but the poison's saving throw DC is low, the weapon's wielder takes a -1 penalty to attack rolls and damage rolls with the weapon, and many high-level creatures are straight-up immune to poison. This is, however, far cheaper than many effects, and there's no use limit.

You'll want a weapon with at least a +3 enhancement bonus (not just a +1 weapon with at least 1 additional +2 bonus or 2 additional +1 bonus weapon special abilities!) if planning to attach the most powerful augment crystals (MIC 221). Start with the crystal of return (least) (MIC 65) (300 gp; 0 lbs.) now if you've not the feat Quick Draw (PH 98) or another way to draw a weapon as a free action. Purchase more augment crystals as needed for the campaign.

Suggestions
All bets are off if the campaign allows more sources than these.

Dual wielding daggers does scale way better with your sneak attack than using only one rapier.

At first if all attacks hit the damage calculation would be:

The problem is, that not all attacks hit.

We know that daggers and rapiers use the same attack bonus, thus having exactly the same chance to hit.

If we assume, that every hit is eligible for sneak attack, we can add the damage to the daggers if any of the two attacks hit. If my math does not fail me that calculates as follows: (For two Daggers)

Also let us talk in average damage for ease:

Regardless of HitChance the daggers deal more damage in average. As the HitChance can never be less than 0.05:

When attacking twice, your chance to hit is higher than when only attacking once.

Here is a graph to visualize the chances that you can apply your sneak attack damage: 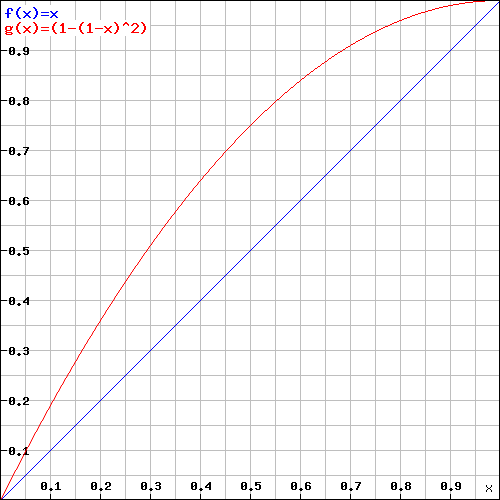 Thus, two daggers are better with and without sneak attack.

Here is another graph visualizing the average damage for both weapons (Assuming +3 Dexterity modifier, 1d6 sneak attack, no magical bonuses, all attacks eligible for sneak attack.) 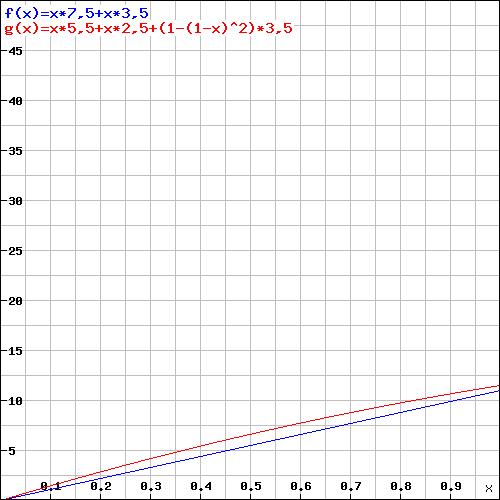 Through OPs comment on another answer, I know his rogue is level 2. This means he could use his bonus action to Dash, Disengage or Hide.

Later on, depending on your subclass and table rules, you might gain Feats or other class features like Fast Hands which require your bonus action. So, why would I take the Two Daggers instead of the Rapier? This would trade in positioning possibilities or other maybe useful opportunities for a measly 0.5 damage.

While the damage difference might appear to be 0.5 in average, the real advantage of dual wielding comes with the sneak attack chance.

Look at it this way:

If you have only 50% hit chance the difference would be

Same scenario, but without sneak attack:

Only a 0.25 damage difference. This gap increases drastically as sneak attack damage increases.

Why is this so important?

When looking at your weapon attack damage, how does it scale?

The 2 Avg. damage difference from the damage dice, if the first attack hits looses its relevance while the increased chance of sneak attack gains in relevance.

Let's look at a level 5 rogue who used is ASI on Dex (+4) and has now 3d6 Sneak attack damage. With a 50% hit chance: [the numbers in square brackets are without sneak attack] 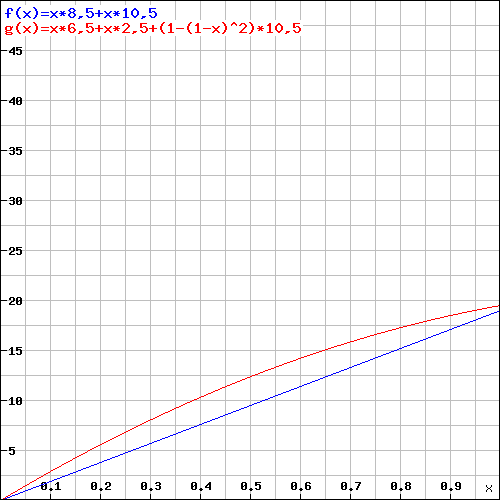 Even a Rapier+1 does not reach the Avg. damage of two daggers. 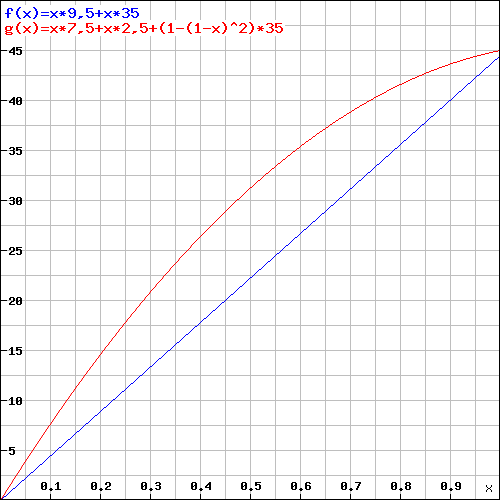 The damage gap increases, but to get the most out of your turn I would recommend the following:

If your first attack with dual daggers hit, accept that you might have dealt more damage with a rapier and use your bonus action to get away (improve your survivability). If this is no option you can attack another time to maybe deal 1-4 extra damage.

If the first attack misses, attack another time, this is where dual wielding shines.