Inspired by a question on another site, what's the best way to add a labyrinth to an adventure scenario without making the challenges contingent upon player skill at mapping or navigation?

I'd like to keep the tension of potentially getting delayed or lost, coming across hazards (both active and passive), and having difficulty returning to safety, but without the need to create a physical battle-map or a spatial correspondence that serves the same function — "you reach the end of a thirty-foot corridor that branches left and right." I'm already aware of skill challenges in games like the 4th edition of Dungeons & Dragons and extended rolls in systems like Storyteller, where the goal is to accrue successes until the challenge is considered "complete." I'm looking for something more creative and better able to keep the players' attention.

Similar to yhw42 I'd suggest using an abstract graph of the labyrinth instead of drawing out the whole thing. However, I'd recommend using something like a flowchart or a data flow diagram or a state diagram for that purpose. 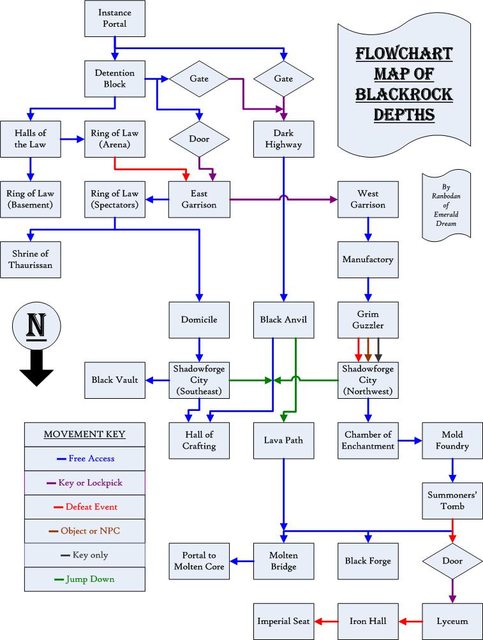 “Flowchart Map of Blackrock Depths” by M3ss3ng3r is licensed under CC BY-SA 3.0 Unported

You can then go on and detail each “node” in the graph as you wish. Perhaps each “corridor” node has a % chance for a random encounter or a trap. Perhaps each skill challenge does not only have “success” or “failure” but also additional routes for a “perfect success” (e.g., success without a single failure) or a “complete failure” (e.g., failure without a single success).

[RPG] How to run a successful and engaging campaign without combat

Well, for starters, I'd say don't use D&D. It is a game tailored towards violent conflicts, which is exactly what you're avoiding, it seems. Mind you, I said "violent conflicts". No story, thus no game, can exist without any conflict whatsoever. I'm not also saying it's completely undoable with D&D, just mainly... a waste of its design and practical goals. Another way to put it, to use a metaphor, is: smartphones are great, you can do a lot with them, they're like handheld computers... But they can't really substitute a desktop computer in every way, maybe not even most ways.

Now, if you're willing to work outside of D&D, there are some good systems out there for that "action and adventure doesn't mean swinging swords all the time" vibe you're after, like, for example, Fate (The Dresden Files RPG, Spirit of the Century, Diaspora, etc), in which most of the mechanics about resolving conflicts are the same, regardless if it's a brawl, a wardrobe and style show off or even an economic dispute between Lex Luthor and Bruce Wayne. It's worth a look, really, and there are SRDs available for some of those games (Spirit of the Century and Diaspora, iirc).

If you're sticking to D&D, plotting the campaign isn't the difficult part; the difficult part is to design encounters (which is just a way of saying "conflict scene") that allow your PCs to shine doing their thing when most of their sheets are geared towards combat (yeah, players do that, it being the game it is).

For the wizard (most hocus-pocus folks, really) and rogue, that's easy. Most other types, though, will rely purely on RP, most of the time, which isn't bad per se, just kinda unfair, since some players get to look at their sheets and say "I can do this, this and that", while the fighter's player has to memorize lines from Gladiator and the ranger's player has to become a living Bear Grylls encyclopedia.

If your group can pull it off, that campaign'd be the stuff of legends, but it'll be hard, really.

[RPG] How to turn a scenario idea into an adventure

I often have that problem, though not to quite the degree you describe. I often stall on how to develop a basic idea into a meaningful adventure scenario. I can do it, but I get some really nasty Blank Page syndrome some days and need a kick to actually get down to work.

Not to be confused with a “funnel adventure” which is entirely different, the Adventure Funnel is a GM preparation method for taking a seed idea and expanding it out into many ideas. The key practical effect it achieves is giving you obstacles and details to make your scenario more involved. The method it uses is a structured brainstorming exercise. I find structured brainstorming methods far more usable than just kinda trying to think of ideas without a structured method.

This is helpful because the more involved your scenario becomes, the more time it takes for the players and their PCs to step through its parts, and the more stuff happens during games. It might not seem like that should make much difference, but when you mix more stuff with a bunch of unpredictable people around the table making choices, you get a multiplicative effect, and the result is satisfying gameplay.

Before you start, know that what you'll get out of this process is not a full adventure, but a pile of pieces that are designed to fully enable you to improvise a fun adventure out of some or all of them (to be determined during play), or enough pieces that you can shove them together and write out a pre-planned adventure outline without any major creative blocks to overcome, just polishing work and slotting in stats and names and such details.

The basic process is well-described in Dr Rotwang's original blog post, but can be summarised as three steps:

Ha ha, you already have enough material for an adventure without even doing step 3! Good for you. You could be done now, if you want. But if you want, using that material will be easier at the table if you…

Now you're really done. You could run a whole session or three with the material you've got now. And introducing your material during play will lead to the players doing things that take up time and are interesting to narrate, resolve, and springboard off of, so it will actually turn into much more material than you actually prepared.

A worked example of using the Adventure Funnel

Dr Rotwang's post not only describes the method, but gives a worked example I urge you to read.

But I also have a Dungeon World dungeon/adventure front I should be writing instead right now so, I'm just going to Adventure Funnel that right here and now. If it seems oddly non-fantasty in parts, that's because we're playing a Final Fantasy inspired game, so there's magitech and stuff in our world.

(My players, if you're so unlikely as to be visiting RPG.se, stop reading here if you don't want to be spoilered! Can't spoiler-block this much formatting. Also, you'd trip over anything that changes between here and actual play…)

A few notes on my thought process are in italic parentheses.

Goal: Retrieve a record of the carvings in the Tomb of the Forgotten Hero.

(That took all of five minutes! Woo!)

(This is where you'll see me start making connections between things above, and showing which caught my imagination.)

(At this point I have tonnes of material, but I still feel the ideas flowing, so I'm not stopping. This is working well!)

(This took quite a bit of time, but that's because I got carried away. Like Dr Rotwang's original, you could really stop at five or nine or whatever few details.)

(I always have a hard time with treasure in Dungeon World because I don't improv this stuff well. I'm much more a fan of poring over D&D-style treasure chapters and finding cool stuff. So Funneling this up is actually super-important for me bettering my Dungeon World GMing.)

The biggest pro of using the Adventure Funnel is that it's quick and can be used either to lay the groundwork for writing up a detailed adventure, or for improvising during a session.

I find it particularly good for generating material I could fall back on during improvised GMing, since I'm not obligated to use a particular idea if it doesn't end up fitting the way the session goes. I can pick and discard bits on the fly.

Another pro of using the Adventure Funnel is that it can be used as an input to other GM preparation methods, instead of using it directly as input to a game session.

The biggest con of using the Adventure Funnel is that you will often generate material you don't end up using. If you don't force yourself to stop with a few details and get carried away like I did above, that can take a lot of time. You can recycle that material for another adventure though, so I like to consider it a bonus, not wasted effort, and using the Adventure Funnel generates material fast enough that it's at least an efficient use of time. Your mileage may vary regarding how you feel about that though.

Now though, I'm off to think about a sandwich, and let this settle and age a bit, so I can distill it into a proper Adventure Front, or perhaps a Perilous Wilds Dungeon Record, later today or tomorrow.