This question already has answers here:
Since advantage and disadvantage caused in a heavily obscured area cancel out, what effect does it have in combat?

What is the process for targeting someone in Magical Darkness with melee and ranged attacks?

For example, if a Warlock casts Magical Darkness and remains inside it, what rolls need to be made by someone trying to target them?

Targeting works as normal, except with disadvantage

If the attacker has no information on the target's location - for example, sound of their footsteps, they might have to guess the target's location instead when making their attack (PHB 194-195). If they guess wrong, the attack can miss regardless of what the player rolls. What counts as the correct location is up to the GM unless playing on a grid. The GM is also not forced to reveal whether an attack at a guessed location misses because of a bad roll or a bad guess.

In situations where detecting the target's location might be challenging but possible, it is reasonable to allow a player to roll a Perception check to identify their position.

Many spells explicitly state the requirement to see the target. Simply knowing the target's location isn't enough, and no rolls can help one there unless they can somehow make the warlock visible in the darkness.

Apply common sense for the enemies.

In any case, try to RP the NPCs acting in a believable manner according to their personality. They might not know the shortest path out of the darkness. Some NPCs could be clever, and other could make bad calls.

If a GM wants to leave this to randomness, then I would suggest an INT or WIS check depending on what the enemy is trying to figure out, but in general it is not required for the GM to roll for this. In case you do want to roll: 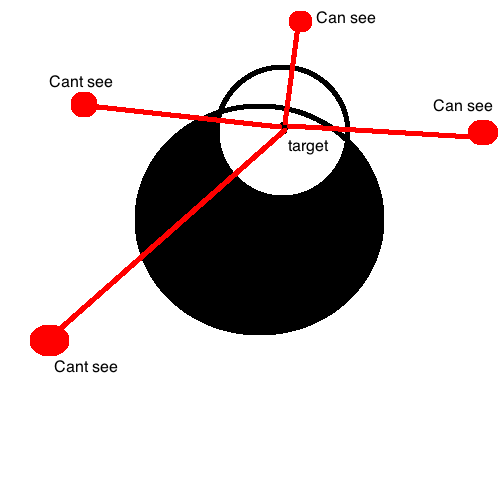