While reading another question I was introduced to the notion of a D&D tournament.

According to the wikipedia article on the D&D Championship Series, the basic idea of these tournaments is that there are multiple tables of players and GMs. The players can choose a pregenerated character and each table runs the same game each round.

Players are somehow scored on their performance. Wikipedia doesn't describe this, instead saying:

The exact scoring system was kept secret as the scoring may reveal secrets to be discovered in the adventure, as well as to encourage players to play to the spirit of the game, not to the exact scoring checklist

How were players scored in these D&D tournaments? Although I mentioned the D&D Championship Series, my interest is broadly in D&D tournaments – that's merely the only example I currently know of. 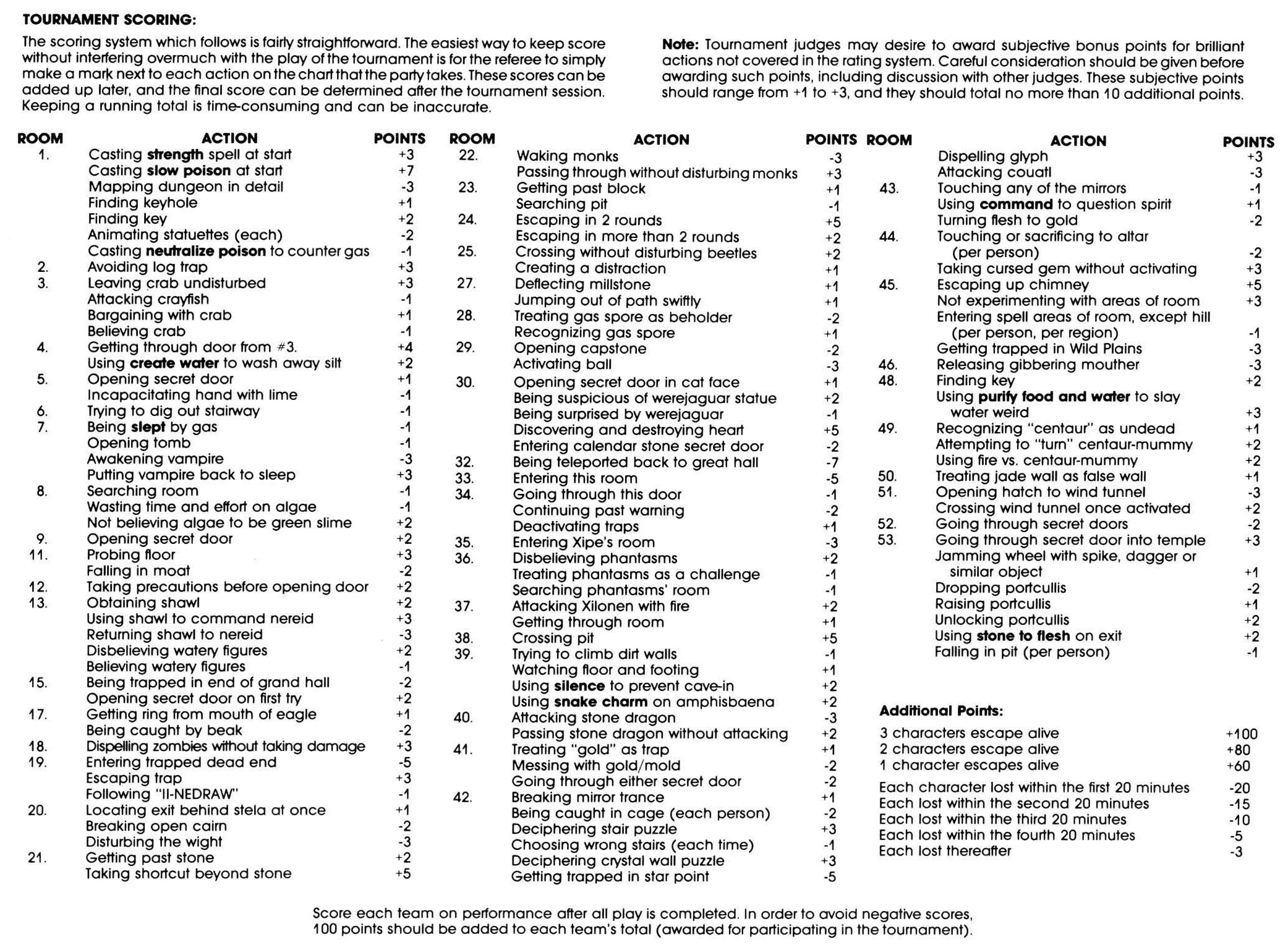 To summarize, parties were scored as a whole, not individual characters. Small numbers of points were given and deducted for a variety of specific actions as well as general outcomes, sorted by room/encounter. There were also larger numbers of points given or deducted for big, overarching goals like finishing within time and avoiding/accruing character deaths. Participation points were added so nobody got a negative total score, and GMs could, with approval from tournament organizers, add a small number of discretionary points that, at the maximum total bonus allowed, would be about 1% of the maximum points available.

[RPG] Is Dungeons & Dragons the origin of “Bahamut” as a dragon

Here is what I was able to discover using a Google Books search. Between 1900 and 1975 the words Bahamut and Dragon come up only in obscure research books about the Bible and Mythical creatures. However in all these books, it is clear that "dragon" is a reference to either a Sea-serpent type creature, or the mythical world serpent. (Mostly in reference to passages in psalms and job, as well as Arabic and Jewish mythological writings) It's also clear that most of these books are focused on the identification of Bahamut with Behemoth. Neither of which are clearly dragons.

After 1976, the words show up together in fantasy related material. I was able to find one reference to a generic mythology book from 1987 but its clear that even in this generic book, it is referring to the dragons of D&D fame. (Citing rules from D&D to describe the dragon's abilities)

I think its safe to say that D&D created the connection between the typical D&D Dragon like creature and Bahamut, and that Gygax or Anderson was inspired by the sea serpent when looking for a name for the Good Dragon deity.

The idea is older still: it looks like it came to D&D via Dave Arneson's Blackmoor

The dragon, a large mythological beast, is found in a variety of story telling traditions from multiple cultures. Some breath fire ("Smaug the Golden" being an example), some are just big and nasty (St George and the Dragon), some breath poison, and some are mystical beings who can shape change into human form. (Chinese myths and legends). Tolkien referred to a cold drake being killed by one of the ancestors of the Rohirrim (LoTR), and Ancalagon the Black being the greatest of flying dragons(Silmarillion, First age). In most stories, one dragon is villain enough.

As I touched on in this answer, dragons ended up in D&D as an eclectic mix of creatures inspired by a multiple story telling traditions. Putting multiple kinds and colors of dragon into one setting wasn't original to D&D, insofar as a story idea. The novel Dragonflight, published in 1968, was the first of the Pern dragon novels by Anne McCaffrey. She had multiple hues of dragons flying about, interacting with dragon riders and other characters while battling the Thread that threatened Pern. The various colored dragons had differing status and personality types based on color1. (I read the book in 1975).

Game-wise, whether or not this setting inspired Gygax, Arneson, and TSR is unknown, but it's likely given the wide variety of adventure stories, sci-fi, fantasy, swords and sorcery tales, legends, and speculative fiction that inspired and provided ideas for the fantasy game in the first place. Multiple kinds and colors of dragons in the game's lore may be a first for a game, (Blackmoor/D&D) but Pern certainly predated it in literature. That dragons in general were described differently in different story telling traditions for millennia makes the general idea very, very old in the treatment of this iconic creature.

Blame it on Blackmoor

Was it a "first" in D&D as published or from something earlier?

It appears that Dave Arneson and Richard Snider were the first to use dragons of different sizes, colors and breath weapons in an RPG. These were in the Blackmoor campaign (1970/1971) time frame (-Harvard- calls it the "proto" D&D era for Blackmoor) which is three years before Dungeons and Dragons was first published.

1From the summary at Wikipedia, which squares with what I remember from the story. Dragons with different colors had differing personality templates.

The dragons come in several colors which generally correlate with their sizes; blue males, green females, brown males, bronze males, and golden females – queens. Bronzes, the largest males, are by tradition the only ones who compete to win the queens in their mating flights. The green females are banned from breeding as they produce only small, less talented dragons. The golden queens are not only the largest dragons, they also hold a subtle control over their dragon communities Weyrs. {Gold dragons did not breath fire as that interferes with breeding -- credit to @MichaelRichardson}

That idea wasn't cut and pasted into D&D. There were no "red dragons" in Pern: they breathed fire /phosgene gas after chewing on certain rocks. Anne McCaffery wasn't writing a game, she was telling a story that took that which was familiar from older story telling traditions -- flying dragons that breath fire -- and folded it into a sci-fi setting in a novel way.