This is a question that I've asked myself numerous times, but I've never gotten a really satisfying result.

The issue is this: let's assume we only have one or multiple d6 dice (arguably the most common type of dice outside of pen & paper), but we still want to play D&D 5e or another RPG game. The game doesn't really matter here, we just need to be able to emulate different kinds of dice, such as d4, d8, d10, d12 or d20. I presume that if calculating these dices from rolls of a d6 is possible, any other potentially required dice rolls can be calculated as well in a similar fashion.

It's pretty trivial if you allow occasional discarding of rolls/rerolls.

Once you get a little practice with it, it's second nature.

Credit goes to sage for suggesting the even/odd roll instead of a coin.

And now some graphs, because everyone likes graphs, right?

Although technically this is bar-graph land, I included a line graph as well as I thought it made it easier to see in light of the number of bars that were being dealt with. I also increased the sampling to some 100,000 dice. 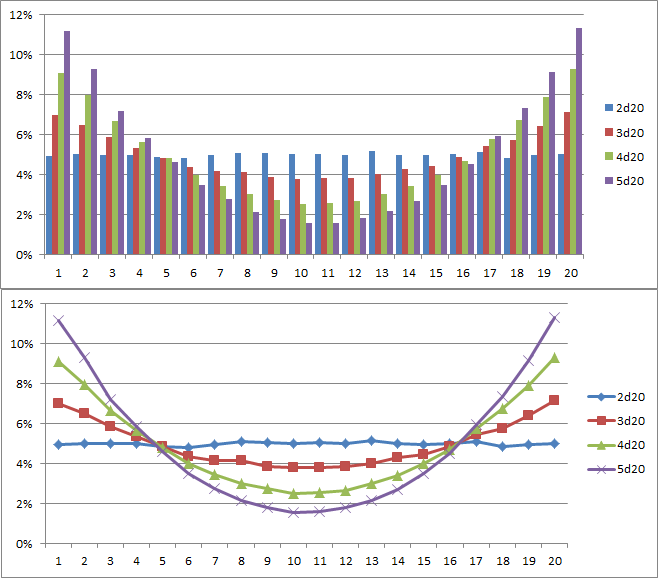 You're not missing anything. Based on the description you provided, it sounds like your player purchased one of Q-Workshop's licensed "Call of Cthulhu" dice sets. Strange as it may seem, the license isn't to the roleplaying game necessarily, but to the story by H.P. Lovecraft and the associated Mythos iconography. The set of dice is decorated to look appropriate for Cthulhu-themed games, but isn't designed for a BRP Call of Cthulhu game — they're the seven dice usually found in D&D and other popular roleplaying games.