Closed. This question is off-topic. It is not currently accepting answers.

“Shopping” questions and other recommendation requests are off-topic, but can be asked on any one of a number of role-playing games discussion forums. For more information, see Are Game Recommendation Questions On Topic, Revisited.

I'm looking for a way to map a world as was done in the Forgotten Realms Interactive Atlas. I want the ability to be able to zoom into areas while maintaining scale, and to get down to battle maps.

The key feature would allow you to have an entire world mapped, and then be able to zoom in and scroll on the regions you're in. Details fade as you zoom out, taxing your RAM less. Another example of a map system would be:

For my d&d campaign, I use mashupforge.com, which allows you to build an interactive map like the one you gave as an example. As a proof of concept, you can refer to a map of mine, that is currently under construction: Faerun

[RPG] Is Forgotten Realms geo-location data copyrighted, or free to use

The short answer is that Forgotten Realms is copyrighted and is not free to use.

The longer answer is that a portion of 5th edition D&D known as the System Reference Document, or SRD, is published and usable under the Open Gaming License, or OGL. You can find all information pertaining to these topics here.

If what you want to use, place names from the Forgotten Realms campaign setting in this case, is not contained in the SRD the website above notes you must publish through the Dungeon Masters (DMs) Guild.

Specifically, the site states that if you want to "publish content using the Forgotten Realms" you must use the DMs Guild.

Outside of that, my assumption is that you would have to seek a license with Wizards of the Coast (WoTC).

Assumptions, however, can be incorrect. WotC was kind enough to respond to the OP and inform them that this use case is indeed covered under its Fan Content Policy

...upon review of the description of your project, it looks like your request is covered by our Wizards of the Coast Fan Content Policy, which you can find here company.wizards.com/fancontentpolicy.

I frequently do this

As PipperChip points out there are some issues that can theoretically arise, particularly where the two grid systems intersect.

I use a hybrid system heavily when curved stairwells exist. However, in these cases, I actually use a third system: radial grid (think dartboard). I'm not saying this is a perfect system or that there isn't better way to do it. But I do think it generally makes better use of curvilinear spaces than a hex grid does.

I'm running Curse of Strahd for a group right now and there are a number of long curving stairwells around the outside of round rooms. In these situations, I build a custom map that uses a hex grid for the center of the tower and a radial system for the stairwells. Where the two meet, the lines can get a little unusual looking but, from a movement and size perspective, they are pretty clean and intuitive to use.

Below is an example of going from Hex to Radial. It does create deadspace pockets along the wall in places but I often let characters occupy half spaces. Sometimes I'll tell players that they have to squeeze to fit into the space if it's a particularly truncated hex. 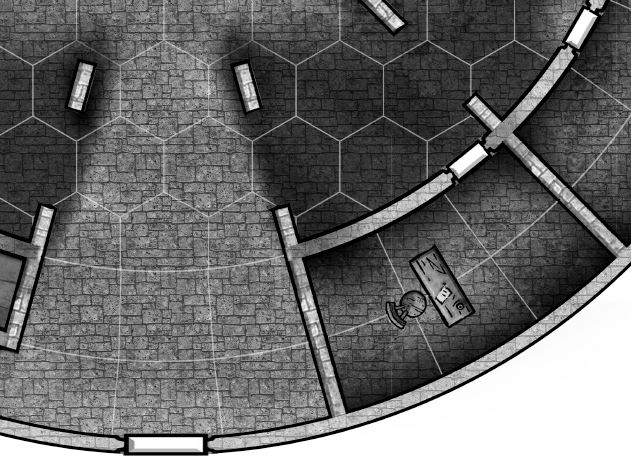 Another thing I do when using a hex grid system in a square room is to reshape the peripheral spaces along the wall to be a hex on one side and a square on the other. They might technically be a little different size/area than the rest but this is infinitely preferable to having half a hex be the space right against the wall and figuring out if a creature can occupy it.

Here's an example of when I switch from hex to square. In this particular map, the square grid suddenly ends (you can just see it at the top of the image). Our group has a lot of Dwarven Forge set pieces which use a square grid and we used them to make a wall (think battle of Helm's Deep from the Lord of the Rings). This map was printed out and tucked up against the set pieces to act as a transition from a big open field that used the hex grid to the square grid of the wall pieces. 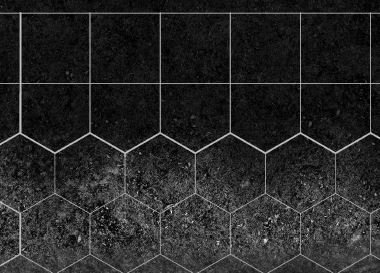 I suppose it is possible to find a way to exploit the interface of these two systems when it comes to AoE or creature size but what I've found is that this hasn't been a problem for me.

For one, a significant proportion of AoE spells say that they wrap around barriers or simply ignore cover so you can often just measure the radius directly instead of counting spaces.

Second, the simplification for positioning and movement in the stairwells and doorways vastly outweighs any added complexity or balancing issues that might arise for AoE effects and positioning. I do have the benefit of playing with some easy going and understanding players, though, so your mileage may vary.

I think that you can help further mitigate issues by 1) explaining how you intend to handle any issues relating to size/position and AoE that might arise ahead of time and 2) generally ruling in favor of the players when they do.