In a discussion about how to covertly hide a spell, it was brought up that you might be able to disguise a spell with a verbal component by sneaking the spell component words into a normal conversation. Mxyzplk gives an example:

"Well, I was talking to <krztl quaranda> the other day and she said <shirak gumptiona>!"

Does a spell with a verbal have to have well-formed words in the correct order and nothing else, or can the spell fire off regardless of filler speech interjected into it?

Are there any examples in D&D material that reference the actual structure of a verbal component? What about Pathfinder's Words of Power?

Core D&D books have always deliberately stayed silent on the issue. (Get it? Silent? I crack myself up.) In Pathfinder, for example, the rules just say

Probably the most famous example of D&D verbal components, however, is the mage Raistlin from the Dragonlance novels, who always cast Light with the word Shirak. Go here to see a relevant quote from The Soulforge. There's some debate over whether that's a spell cast or a spell activation command word for his staff, but he also casts Sleep on someone with the words "Ast tasarak sinularan kyrnawi." That's their approach; most other gaming fiction BSes it away as "arcane syllables roll off the wizard's tongue..."

In general D&D tries to leave this undefined so that if in our campaign world you want arcane words that's fine, or if you want incantations or whatnot like the anime Slayers you can do that ("Darkness beyond twilight. Crimson beyond blood that flows..."), or Ars Magica real/foreign spell words ("Perdo Ignem!").

So the real answer to this is 'decide how you want it to work in your campaign!'

Having said that, a more recent example of "what spellcasting works like" is available in the Pathfinder comics (overseen by Paizo and some written by Paizo employees). There they appear to have made the artistic decision to use several of these models, the "weird words" model for arcane spellcasters and the "Slayers" model for clerics. See these panels starring the Pathfinder iconic NPCs: 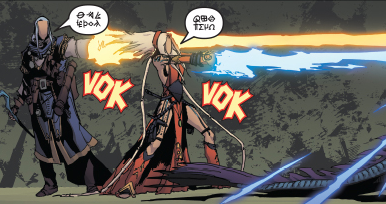 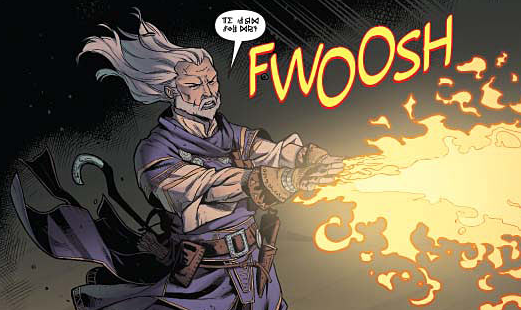 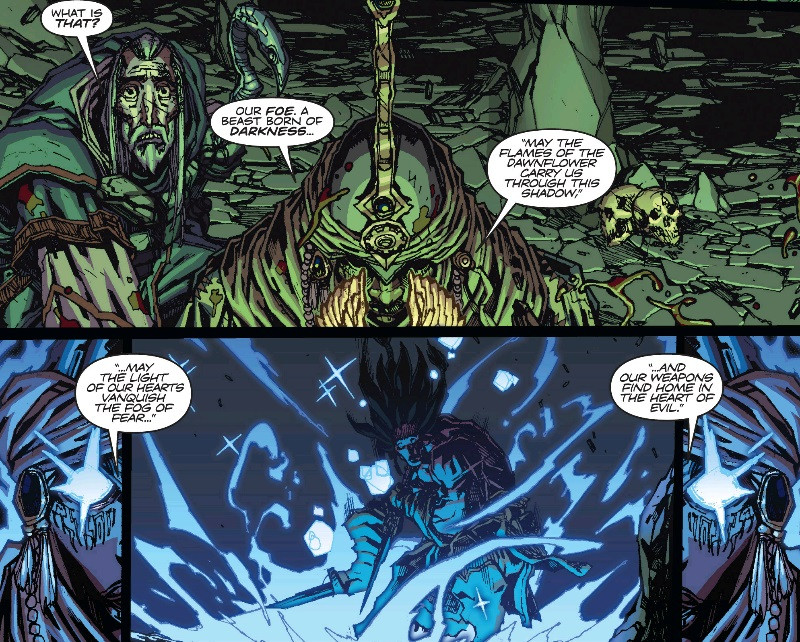 [RPG] When using the bard’s message spell, do characters have to whisper

I did some research and cannot find any sort of official ruling for this. Although it seems to me the the answer is clear.

You can whisper messages and receive whispered replies. Those nearby can hear these messages with a DC 25 Perception check. You point your finger at each creature you want to receive the message. When you whisper, the whispered message is audible to all targeted creatures within range. Magical silence, 1 foot of stone, 1 inch of common metal (or a thin sheet of lead), or 3 feet of wood or dirt blocks the spell. The message does not have to travel in a straight line. It can circumvent a barrier if there is an open path between you and the subject, and the path's entire length lies within the spell's range. The creatures that receive the message can whisper a reply that you hear. The spell transmits sound, not meaning; it doesn't transcend language barriers. To speak a message, you must mouth the words and whisper.

By RAW, it specifically says the in the spell, you must mouth the words and whisper.

As for how you should rule? What makes sense for your campaign? Vote, houserule, or go by what the spell says.

[RPG] How exactly does the Web spell work

All Area of Effect Spells are Three-Dimensional Unless Otherwise Specified

Note the use of the phrase many-layered in the Web description. All areas of effect in 3.PF are fully three-dimensional unless, such as in the Blade Barrier spell, a different area is specified. Web does not specify that it isn't three-dimensional and as such takes up the entire space of its area between the two anchor points.