In 4th ed, WotC's character manager printed out character sheets with these awesome spell summary cards. They also had similar summary cards for monsters for the DM. I checked around the site, but unless I just missed it, they don't seem to have anything like that for 5th edition. Does anyone know if there are good options? Even if it was only a PDF template I could fill in and print out.

The only official product of this type is the spellbook cards from Gale Force 9. I just got mine (literally yesterday), and they seem pretty good. Some of the more complicated spells have an incomplete summary and a reference to the PHB, and I have heard complaints about them online.

Anything else you might be able to find that includes the full text of spells is probably an illegal product, which I did find some of but I'm not going to link or recommend here.

This site offers 5e card templates, which I haven't tried, but they look pretty good if you're willing to do the work of filling them in. Alternatively, it wouldn't be too difficult to make up your own very basic template along similar lines - it might not look as pretty, but it's free.

This is incredibly ugly (I'm not a graphic designer), but it took me less than 5 minutes to make and cost me nothing. If you're already looking at filling your cards out yourself, this really isn't much extra work. 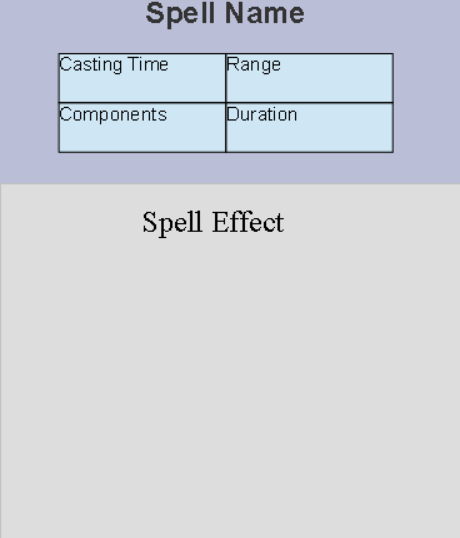 Or if you want to be fancy and have the available resources, you could re-skin the 4e power cards (example below). Depending on how you do it, this does take a little bit of time though, at least initially. 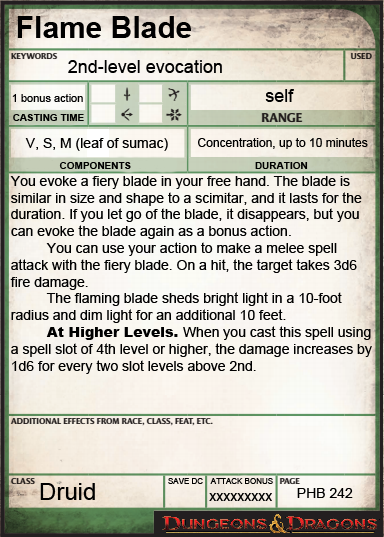 [RPG] Is it worth teaching ourselves D&D with the Starter Set, or better to join an existing group

5th edition's Starter Set is decent to give you a feel for the basic rules, and outside players are not necessary. It is designed with beginners in mind, and is thus a good intro to the game. The starter set has an adventure in it that goes from level 1 to 5, while covering a lot of ground from a role-playing perspective as well as a combat perspective.

It's 20 dollars, but there's a high likelihood that most things outside of using the basic rules to create a character and joining the adventure league as a player are going to cost you more.

It does give you enough to work with to create your own campaigns as well, as the monsters in the appendix are varied enough for some play-room.

This is particularly advantageous if you don't have a lot of people in your current group and want to get going. If you just combine two groups, you might make the new group too big to manage reasonably. If there's only a couple of you it is easy and would likely be a great intro. If you have a single player you can draw in to play or DM that knows a lot about the game, it can certainly compensate on either side.

The basic rules are available on the official D&D website. They cover character creation for one of each type of fighter, cleric, rogue, and wizard as well as an assortment of backgrounds. The basic rules are free, and include monsters and magic items in the Dungeon Master documents. They won't tell your DM how to prepare a game outside of managing encounters, but it is enough to get you moving for free if your DM is willing to put in a little work.

As of the time of this update, the three core rule-books are available for purchase at online retailers and local game/hobby-stores.

The Player's Handbook (PHB) covers all of character creation, including far more options than the basic rules and documentation of the rules necessary to play that is more in depth than the basic rules (except in combat, which was covered very well in the basic rules). It is about the price of a new computer game (40-60 USD after-tax depending on where you get them). A game benefits highly from having this book, and most players end up getting one for themselves at some point.

The Monster Manual (MM) and Dungeon Master's Guide (DMG) are more for the DM. The former includes a huge assortment of monsters, beasts, and NPC templates ready for use. The latter is primarily about customizing your campaign, tuning and tweaking it for the way you want to play. The DMG also covers magic items, random dungeon generators, and a host of other resources that can be useful to someone running a game to speed up preparation and allow for customization. Typically only one of each of these books is necessary in an entire gaming group, but with the basic rules for free, the investment can wait until you are ready for it. Each of these two books costs the same as the PHB. Some groups pitch in together to split the cost for these two books, just make sure there won't be problems with book ownership after it's all done.

If you are in a hurry to try it within the next 3 or 4 weeks, then by all means pick up the Starter Set, or find someone at your local game store that has it and wants to run a game. Ultimately, the decision on how to approach this is up to you. There is no wrong path to start the game.

[RPG] How to manage the campaign digitally, without using a screen at the table

I have a similar problem, if not for similar reasons. The software that I utilize to solve it is The Keep, by NBOS.

It's a bit pricey, which made me take while to get it, and it does have a certain idea in mind of how it wants you to keep track of information- but if you can adapt, it works well.

First, from their blurb:

For my review of it- I'll start with the pros:

I think it comes close enough to your needs that you're likely to find it useful- and it's definitely built from an RPG perspective.

One last note - you don't have to buy it from NBOS.. you can get it from Drive-Thru RPG, and sometimes they have it on sale. There's currently a bundle with it and Fractal Mapper that's less than the two separately.

UPDATE: After posting this, I was corrected- the Keep does allow you to do hyperlinking. I'm not sure when this was added, or if I've just always overlooked it.