This is an exercise in ridiculousness, but I find it quite fun to consider – hence powergaming.

I remember the rules saying that the rider can mount a creature one size category larger than himself. Thus, our druid is able to mount his gorilla (PFSRD even lists gorillas under Ride skill), but not the wolf.
But under the same premise nothing stops the gnome from mounting a half-orc, provided the orc is willing. This has tremendous advantages as we can assume the half-orc is combat trained and obviously has more than a few combat uses. We can imagine a gnome piggybacking on a charging half-orc and it seems that in optimising Cavalier this notion is fairly accepted.

I wanted to have a set of characters ranging from as small as I can get (currently with a Small race – any Tiny playable characters out there?) up to having a Huge mount (say, a Mammoth with a Mammoth Rider PRC) giving me an effective stack of 4 (Small, Medium, Large, Huge) characters, though not necessarily PCs, say, animal companions, summons, familiars, just regular mounts. After gathering a number of creatures willing to participate, I'd make sure the top one is a Barbarian with Ferocious Mount and Greater Ferocious Mount. This causes the barbarian's mount to use his rage and all of his rage powers that do not require an action to activate and are constant when raging. It just so happens that Ferocious Mount and Greater Ferocious Mount are such powers, so in my understanding all the applicable rage powers would propagate down the Stack'O'Mounts fueling this ungodly tower. Now the focus would be to enhance each mount's attacks, be those natural attacks or otherwise. However, if Stack'O'Mounts could possibly charge, Beast Totem theme has some very powerful choices. If not, then maybe getting a wereboar-kin to be on top could enhance each mount's gore attacks, that could be a lot of Con damage.

Right, you want to to propagate Rage effects throughout a tower of creatures. That's... actually kind of interesting. Beast Totem chain grants Pounce and 2 Claw attacks, substantially improving the combat prospects of all creatures in the tower.

Looking them over, we have some... interesting interactions. For a start, as your Half-Orc mount is not a 'combat-trained mount', you have to make a move action to control him in battle as he becomes frightened. Yes, the condition. No, I am not making this up.

But hopefully we could waive that somewhat ill-considered clause (what about an intelligent animal? ugh) and assume a half-orc with player class levels is 'trained for combat riding'. So, you're looking at a DC 5 check, probably with a -5 since a half-orc is not 'suited to riding', to keep the use of both your hands and 'control him with your knees'.

I'm struggling to contain my giggles as I write this.

A slightly more difficult attack is to 'Fight With A Combat Trained Mount', a DC 10 Ride Check, with again that pesky -5 for being ill-suited as a Mount. With Ride as a Class Skill, though, it's probably pretty easy to make this check, especially with an Exotic Military Saddle.

Note that EACH rider would have to make this check, so 3/4 of the stack if you're going Mammoth->Gorilla->Half-Orc->Gnome. I'm not sure if Gorillas get Ride as a class skill. This is particularly problematic as if the Gorilla gets unseated from the Mammoth... well, actually, both the Half-Orc and the Gnome would get to roll to 'Stay in saddle', actually, which is only a DC 5 check. Presumably the Gorilla could attempt to 'Fast Mount' in his next turn, thus returning the stack bonuses to the Mammoth.

I can't find any rules in the Mounted Combat section or the Ride skill to disallow this.

I also think it would be awesome, and utterly approve of the mobile 'Tower of Rage'. Note that the Entire Stack would act on the Initiative of the gnome ("Your mount acts on your initiative count as you direct it. You move at its speed, but the mount uses its action to move.")

I assume this means that the stack acts on the gnome's initiative, but moves at the Mammoth's speed (and if it charges, they all count as charging). Note, I am unsure if a Small Character with 10' of reach from a spear could actually reach the ground if he was on the back of a half-orc on the back of a gorilla on the back of mammoth. I think he couldn't, actually. Ergo, he should probably multiclass to bard and do some form of 'rage music', because, why not.

There is a catch, however; Ferocious Mount mentions that you must spend an extra round of rage to spread the rage to your mount, which the mounts can't do as they have no rage class ability. Greater Ferocious Mount makes no mention of this, but Rage powers don't activate if the wielder is not in a Rage, SO while you can make a Tower of Mounts, you cannot make all those mounts rage unless each mount in the stack is also a Barbarian.

It's worth noting that if each mount is a Barbarian, they will pass on any continuous Rage powers during the Rage to any Barbarians lower in the stack, potentially making the lowest Barbarian have many many many Rage Powers.

But yes. Unfortunately as is it doesn't work unless all but the lowest 'mount' in the stack are all Barbarians with enough Rage rounds to make this worth doing.

In 3.5e they would all be wielding monks, as monks are a manufactured weapon.

Probably it would end up looking a little bit like this; 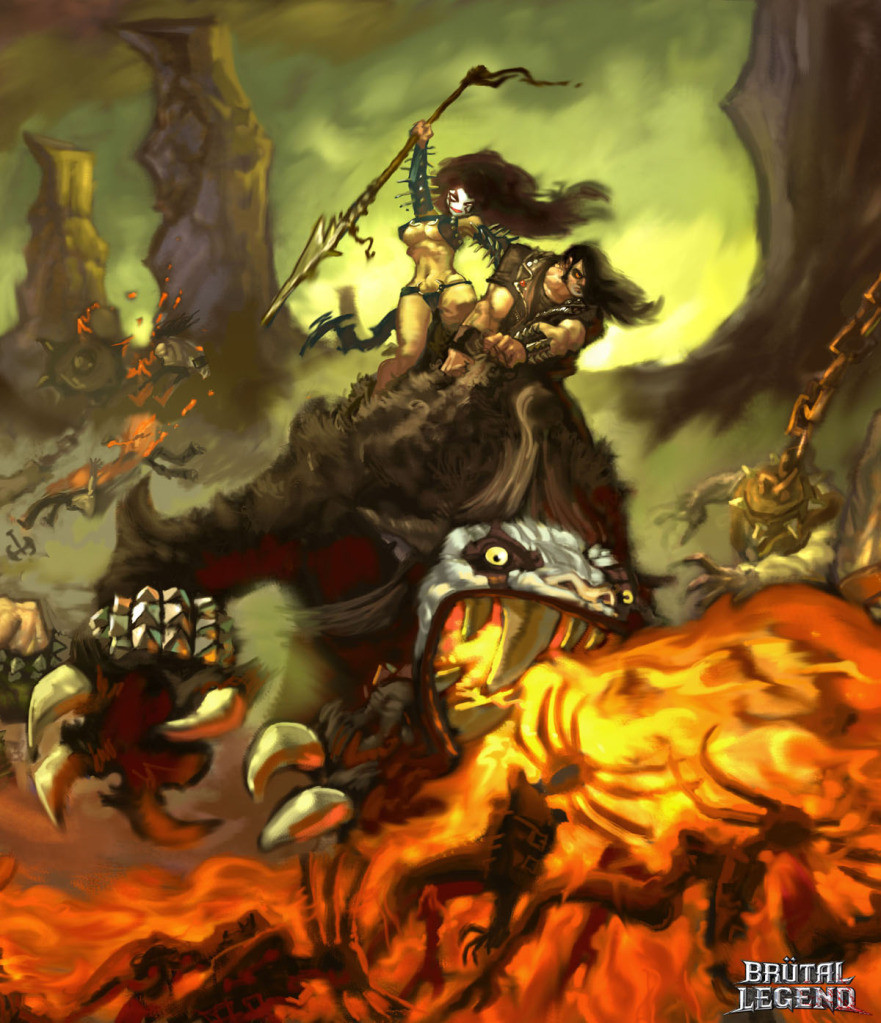 YOUR LIGHTNING IS ALL I NEED

Ok, first of all I'd like to say that making characters like this is one of the main reasons I role play, so I'll be trying to come at this from both sides where possible.

The first problem is the power divide.
The best way I've found of dealing with this is with making time the biggest problem.
Unless they have some way of manipulating time it is usually the most limited resource, as everything else can be gained given enough time.
If there is too much for him to handle then he will have to decide which things he wants to deal with personally and that will limit the occurrence of the problem situations of making combat encounters for everyone.

The next issue would be fame.
If he is so powerful then antagonists will start to hear about him and will start factoring him in when they plan.
You said he is taking advantage of an "Infection" in a way that it wasn't designed to be used.
A smart antagonist that knows a werewolf is coming to get him will hide during the full moon, or better yet, have wolfsbane.
Your antagonist can do interesting things like weakening, disabling, curing or more interestingly mutating your player.
This has the side benefit for a player that pays attention of showing that you are trying for them, catering to what they do so that they have a more interesting game.
The important thing is to not just surprise them with something permanently disabling as them they will just feel like they are being targeted.

If you must use rules then try to work out something works for both sides and is creative.
As you said, he's worked hard to get where he is, probably put a lot of time into a character that he really likes.
If you can, change the powerbase to something that works rather than just removing it from him. Also, do it with a story so that it doesn't break the immersion of your game.
For example have the players destroy an ancient artifact that was what was allowing all his powers to work together normally. As a side effect the powers, now in conflict within him, cause him to be luckier and so he gets a greater income or people become strangely attracted to him, causing him to have more helpers and influence in your area.

To directly answer the final question, either separate the objectives so that it is rare that he dominates and is ok when he does or create situations to bring him in line with others when it happens so that there is no divide.

[RPG] How to ease down the munchkin factor

This might not be as much of a problem as you think. Why? Because munchkining, minmaxing, optimising, whatever you want to call it - is severely limited in 5e. The main techniques for it in previous editions of D&D involved things which are significantly less effective in 5e.

Multiclassing has been crippled by the all-important ability score increases/feats being a feature of class advancement instead of character advancement. There is currently a limited selection of classes and feats, so taking advantage of obscure classes, prestige classes, variants, and feats is no longer an option.

D&D 5e also introduces the concept of 'bounded accuracy'; see here for a good explanation of this idea. There is only so much it's possible to do to optimise a character in 5e, and the gap between an optimised character and an unoptimised one will be fairly small.

Your players will still spend time optimising their characters, of course, but that's not necessarily a bad thing. If a player hasn't spent any time on their character, that's a sign that they may not be particularly invested in them.

As far as creating playable characters with reasonable backstories goes, this is a great opportunity to use their munchkin-ness against them. They're going to want to choose a certain background for the proficiencies it offers - make them justify it. You want to be a Sailor who became an adventuring Wizard with a single level in Cleric? That's fine, but you'd better have a damn good explanation for it.

And using their munchkin-ness against them is a great technique to make them roleplay, too. When they create their characters, they'll choose a bond, a flaw, an ideal, and a trait. Let them know that you're happy to hand out inspiration (which is incredibly powerful - advantage to a roll of your choice? Sweet damn, who wouldn't want that?) if they play their character. Positive incentives have been used to motivate people to do what the motivator wants for years, because it works.

Quick bit of backup for all this - I'm DM-ing 5e for a group consisting of 3 munchkins and 2 roleplayers. One of the munchkins is so bad he walked into a core-only 3.5 game and insisted on creating an Artificer. And you know what? He's playing a single-classed Fighter, roleplaying as much or more than the roleplayers, and (as far as I can tell) having a great time doing it. (Oh, and he also has by far the most extensive backstory, he really got into it when he was choosing his background options.)