You and the creatures you designate when you cast this spell can move the object normally.

This seems to imply that you can choose to move the object or let it remain immovable while you interact with it. Considering each individual boot is less than 10 pounds and I weigh less than 4000 pounds, I could cast Immovable Object on my boots. Since I can freely move the boots, I could effectively walk around in the air, essentially flying. If this is cast at 6th level, I would then be able to fly forever and could enchant every member of my party with permanent flight.

Is this true, or did I misinterpret something in the spell's description?

No, the boots are always able to be moved by you

You and the creatures you designate when you cast this spell can move the object normally.

The spell doesn't say you can tell the object to fix in place and then be free floating for you again. It is either fixed (for creatures not designated by you) or freely moveable by you (and those you nominate).

So you don't have the option to make it immovable for you and then movable again a second later. For you, it is as if the spell is not in effect.

[RPG] Can a group use multiple mage hands to carry an object over 10 lbs.

In general, game effects with the same name do not stack. In this case however, stacking is not an issue. Although a cursory reading of RAW would indicate that you could not lift an object over 10 pounds in weight, a more careful analysis of the wording reveals that a mage hand may not "carry more than 10 pounds", not that it may not "carry an object weighing more than 10 pounds".

So yes, if you want to carry a two person tent (20 lbs), then it is perfectly reasonable for two mage hands to each carry 10 pounds of the weight.

[RPG] use an Immovable Rod to Pin an enethe

In order to attempt to pin an opponent, they must first be on the ground, or perhaps pressed flat up against a solid surface like a wall. In order to put them there, you'll need to Shove them, requiring an Athletics Check on your part, opposed by an Athletics or Acrobatics check on their part (allows for Forced Movement to press them into the wall, or to knock them prone).

At that point, you need to place the immovable rod in an appropriate location to actually pin them to the ground. As I'll get to below, this is more complicated than it sounds. What this takes is going to be up to your DM, to place the rod in the 'right place' while your opponent is probably trying to prevent you from doing so. Personally, I'd call it a grapple check, either at Disadvantage for how precise you have to be in placing the rod, or requiring you to 'Pin' them (with the Grappler Feat). That's another Action.

Now you have to activate the Immovable Rod...that's a third Action.

And you have to do all of this without your opponent being able to break free.

(Realistically, it would probably require Grapple > Shove > Grapple again [to get the rod settled right] > Activate Rod...as this would allow you to sequentially keep them contained in a way so they couldn't just stand up after you knocked them down) So, a total of up to 3 to 4 Actions, depending on if your opponent is going to get a turn between you knocking them down and you working to pin them with the rod.

You can trim these down with class features...

Why is this so hard?

Just for a reference on this: I have several years training with the short staff (3-foot). So this difficulty is rooted in my knowledge of how to use a staff to pin someone down.

In order to pin someone with an Immovable Rod, you have to place it in such a way that they cannot simply wiggle out from under it. So if your rod is poorly placed, if it is placed at an angle to their body (and not secured by another part of their body), or if you don't press it down hard enough against them--they'll just wiggle out from underneath it and be free. You describe it as being a 'very heavy weight.' But the rod on them will only press them down as hard as you, personally, can press it into them and still have a hand ready to press the button. And trying to do this while they are trying to resist you.

Most staff locks depend on the human holding the staff being able to tighten the lock to inflict increasing pain if the pinned opponent tries to get free. And they depend on being able to adjust the position of the staff to secure the lock if the opponent begins to attempt to wiggle free. Alternately, you can use a hand to grip the 'loose' part of the lock (often the wrist) to assist the staff-pin. This becomes necessary because a thin straight rod pressing down on the wrist is easier to get loose from than a hand that is wrapped entirely around that wrist.

While an Immovable Rod takes a DC 30 Strength check to move, it's not actually pressing down on you. It's simply stuck in place. So if you can shift any part of yourself so that the rod is against a thinner profile of your body, it's no longer pressing as hard. If it it placed against your chest, and you manage to wiggle to where it would now be placed over your stomach...it's possibly not even touching you any more. Once you set it, you can't adjust it to maintain the lock.

Even a 'pin' such as pressing the staff into an opponent's throat is more about the threat of 'if you move, I'll press harder' than it is about actually restraining them.

Furthermore, In accordance with this question, we can estimate that an immovable rod is only 2 to 3 feet long and about an inch thick. So given its length, you have to position your opponent in such a way that they can't reach the button. This either means standing the rod on end (which is very easy to wiggle out of), or making sure their arms are positioned in a way where they can't reach the ends of the rod effectively, either because their hands are restrained as well, or they simply can't reach it).

They may not know how it works...but the button on an immovable rod isn't exactly hidden. Someone grabbing at the rod might simply find it by accident.

If you try to simply lay it across their chest and activate it, their arms are free (your chest is thicker than your arms, and the rod is a straight object). And the chest compresses fairly well...you can wiggle out from something pressed against your chest unless it is set extremely tight. And if the rod is tilted at all...it'll be even easier.

If you place the tip into their throat and activate it, they may still be able to reach the button and either you have it pressed hard enough into their throat that they can't breathe, or they could just slip out from under it. And, well...placing it precisely there while they are trying to get away from you is not easy.

What you need to do

For an ideal pin with an immovable rod, you want your opponent to be face-down, and you want to get them into a joint lock that can be maintained by the rod itself, and prevents the arm nearest the button from being able to move.

The simplest lock to use for this would be a hammerlock, modified for a staff. 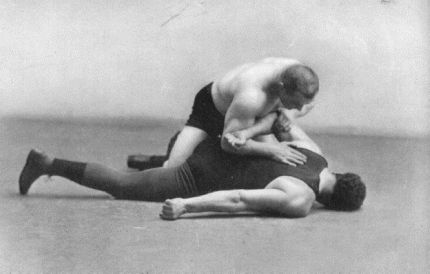 With the arm twisted up behind the back, then shove the rod through the bend in their elbow, pull their wrist as far up their spine as possible, and press the top of the rod into their wrist as hard as you can....then press the button. They might still be able to wiggle out of that...getting their hand out from under the rod, but it would be hard.