I am seeing some magical items that refer to natural weapons, but I can't find information about what they actually are. I don't remember seeing it in the Player's Handbook, and googling it isn't finding anything. Can anybody tell me what they are, and where the rules for them are found?

If it means anything, the item I was seeing this on was the Insignia of Claws from the Hoard of the Dragon Queen campaign source book (described on p. 94).

Natural weapons are most commonly found on monsters and the best description for them in general is found in the intro to the Monster Manual (p. 10-11) or the corresponding portion of the basic rules:

The most common actions that a monster will take in combat are melee and ranged attacks. These can be spell attacks or weapon attack, where the "weapon" might be a manufactured item or a natural weapon such as a claw or tail spike.

So it is simple, natural weapons are, as their name implies, weapons that happen to be naturally occurring on a monster or creature's body.

Most of the time in monster stat blocks especially they aren't even labeled as natural weapons in any special way. For example, the crab has:

Obviously the crab's claws are not manufactured and are thus natural weapons. And the rules simply call it a "melee weapon attack" since there's no difference in rules that would make it necessary to point it out.

When you see a natural weapon, you simply treat it exactly the same way as any other weapon for the purposes of attacking. Nowhere in the rules are there any default rules to treat them differently in any capacity. The only implied difference between natural weapons and manufactured weapons is that natural weapons cannot be easily removed (so disarming a monster would be difficult if not impossible). This is an area of the rules not explicitly laid out though so your DM will have to make specific rulings if any conflict comes up.

When a PC encounters natural weapons it is through a specific feature that gives them one (it could be a spell or magic item or racial feature or something else). That feature will describe how any special rules surrounding the natural weapon (if any) including how much damage it does.

Even though natural weapons are weapons, there are many examples of abilities granting the power to use natural weapons to make unarmed strikes (something that normally can only be done with no weapon).

[...] your claws are natural weapons, which you can use to make unarmed strikes. If you hit with them, you deal slashing damage equal to 1d4 + your Strength modifier, instead of the bludgeoning damage normal for an unarmed strike.

Again, if an ability granting a natural attack has any special rules or powers it will say so (just like the above example). But this is not a general rule. In general, natural weapons are just normal weapons.

The description of the insignia of claws says:

While wearing the insignia you gain a +1 bonus to the attack rolls and the damage rolls you make with unarmed strikes and natural weapons.

It is good to note that the insignia does not give you natural weapons, just enhances them if you happen to have them.

[RPG] What happens when I think like a dragon

Draconomicon (v 3.5) has the best information I have found to piece together what dragons think like and for the most part they are like geniuses that feel a small urge to eat sheep and hoard treasure.

The most important element shaping a dragon’s outlook and state of mind is time. Dragons have no desire to live for the moment; they have a vast supply of moments stretching out before them. They do not worry about wasted time. If dragons have anything in excess, it is time, and they do not concern themselves with haste. Even the dullards among dragonkind seek to fill their time by exercising their minds. Solving puzzles is a favorite activity, though the form these puzzles take depends on the kind of dragon involved. Some, such as the bronze and the copper, seek out challenging puzzles of a benign nature. Others, such as the red and the blue, contemplate a much darker brand of conundrums. They plot ways to satisfy their greed, to defeat opponents, and to gain power over other creatures. Many scholars believe that dragons owe their natural aptitude for magic to the mental games they constantly play just to keep themselves occupied.

All true dragons have great patience. They seldom hurry or rush, because they believe anything worth doing is worth doing right. For a dragon, doing something right usually involves spending a long time (from the viewpoint of shorter-lived beings) contemplating the next step.

Are just a few examples from page 25 of the Draconomicon, seek that book for more info.

As for "what does this item make you think like" is somewhat of a different answer as noted in the comments below; the item does not turn you into a dragon with all of the ancestral memories that they would possess. Thus to answer that question "what makes someone dealing with dragons more compatible in mind set?", this would have to give you greater understanding of dragons, more then most; i.e. be closer in alignment to the dragon in question and also have great knowledge on the way said dragon would act or want. The Item does not grant all of these changes but in turn twists your mind so that you simply understand the body language of dragons innately, thus when interacting with them they seem to understand you better and as a result of this understanding you also would understand them to a much higher degree. If said dragon did not know of this item or that you possessed it, it would grant you significant advantage to social encounters with them.

I would describe to my player that while using this item, he suddenly feels everyone around him seems more blunt with their actions, their words seem so plain and open, every non-dragon seems much easier to read and I would grant them a circumstantial buff to their sense motive to any short-lived race. I do not believe they would even notice the item's influence when talking with dragons as it would feel natural.

Someone who has strong draconic ancestry, e.g. half their ancestry (one parent, or child of two half-dragons, whatever; someone who was, strictly-speaking, a quarter dragon or eighth dragon might still be modeled with the half-dragon rules). Literally is a dragon, in game terms and in fluff terms, though with a roughly humanoid body shape.

Sometimes ritual or magics could be used to infuse a person with draconic aspects, in game terms becoming a half-dragon. In 3.5e, there was a “prestige class” called the dragon disciple that gained this as its final level, for example. This obviously did not retroactively change the person’s ancestry, just changed their bodies to match those of “born” half-dragons.

In 5e, Hoard of the Dragon Queen is so far the only place where half-dragons have been seen. They are clearly distinct from dragonborn, but the book has actually been criticized by reviewers for not explaining exactly what the distinction is. Based on this twitter exchange... 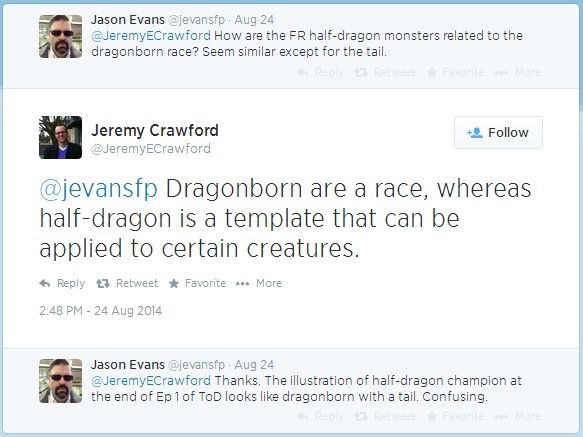 I expect to learn more of half-dragons in the Dungeon Master’s Guide or Monster Manual.

Originally the “Dragonborn of Bahamut,” these were humanoid devotees of Bahamut, the good dragon god, dedicated to the slaying of the evil dragons aligned with Tiamat. They underwent a ritual to change themselves from whatever race they were originally, into something more dragon-y. The process literally involved getting put in an egg and later “hatching” as a dragonborn.

Despite this process, the dragonborn were still members of their original race, not true dragons. They did lose most of the racial features typical to that race, though, and replaced them with several dragon “aspects,” such as a breath weapon or wings. See Races of the Dragon for more details.

In 4e, these were changed into a more generic draconic-humanoid race, rather than a modification of existing people, and were supposed to be descendants of Io, the dragon greater god. This has remained their story for 5e.

In both 4e and 5e, the Dragonlance Campaign Setting changed the interpretation of dragonborn; see Draconians, below.

These are from the Dragonlance Campaign Setting, where they were made by an evil god from the eggs of good dragons; see Canageek’s answer for more details there.

In 5e, Draconians are represented primarily using the Dragonborn race, with a few modifications.

You didn’t ask about these, and they are fairly-likely to never appear in 5e, but just in case you see reference to them and wonder what they are:

This was a template from 3.5e used in cases of someone having fairly-strong draconic ancestry, but not strong enough to use the half-dragon template. They demonstrated their draconic traits less strongly, and in the 3.5e rules, had their original type with the Dragonblooded subtype tacked on, rather than the Dragon type that half-dragons got.

Like I said, I doubt 5e will ever use these, they were primarily required to fill a mechanical niche that was specific to the 3.5e template system.

This is for draconic ancestry even weaker than draconic, used for people where the draconic ancestor is ancient history, or completely forgotten. It has no effect on its own, and dragonblooded people cannot be immediately distinguished from others by inspection. However, they could take a number of feats typically reserved for dragons by virtue of their dragonblooded subtype.

Because the dragonblooded status is a matter of such slight ancestry, it is possible for characters to “discover” such ancestry and tap into it where they previously did not; the Dragontouched feat from Dragon Magic can be taken by any character with at least 11 Charisma, and grants the dragonblooded status (and some other exceedingly minor bonuses). The dragonfire adept class from the same book gains this feat as a bonus feat, and makes no requirements about it; in that case, mere veneration and emulation of dragons is enough to be considered dragonblooded.

From this we can conclude that trace amounts of draconic blood can be found very widely, at least in the 3.5e gameworld.

What the proper definition of a “true dragon” is was the subject of quite a lot of debate in 3.5e, and unlike the above two terms, the term “true dragon” is much more likely to appear in 5e. The metallic (gold, silver, copper, brass, bronze, etc.) and chromatic (red, black, green, blue, white, etc.) dragons are definitely true dragons. Beyond that, it gets murkier. I have made some statements about half-dragons being true dragons and dragonborn, draconians, draconic creatures, and dragonblooded creatures not being true dragons. This I am basing largely on a contentious subject in the 3.5e rules to make an in-character point. You should thus consider these statements with appropriate quantities of salt. Basically, in 3.5e, half-dragons received the Dragon type, while the others all retain their original type.

In 4e, this distinction did not exist within the rules. Player races did not have “types,” and dragonborn were the only playable form of dragon. It is unclear just how dragon-y they were meant to be.

I have not seen official statements in 5e regarding “true dragon” distinctions in that edition, aside from the fact that dragonborn are definitely not true dragons. It is unclear from Hoard of the Dragon Queen whether or not those half-dragons would be considered true dragons.