Rakshasa have been part of D&D for more than 35 years, appearing in every edition. These evil magic cat-people are clearly inspired by the rakshas from Hindu and Buddhist mythologies, but they have elements which indicate another source as well: so far as I can tell, backwards hands are not part of the original rakshasa concept.

I'm quite aware that often the answer to "why did D&D do this?" is "Gygax just did it," or just a baffled shrug. But given the number of interviews and living information available, I'd like to get something more concrete. So although speculation may be all that's available, I'm holding out hope for some "origin of" D&D magazine article or a similar source that draws a non-speculative line of influence from inspiration to monster.

[Context: I want to use creatures inspired by D&D rakshasa in non-D&D RPGs, and it's important to me that I go to sources rather than simply plagiarizing D&D's ideas.]

There's an episode of the 1970s Kolchak: Night Stalker series that includes a shapeshifter called a rakshasa. It also involves a vulnerability to blessed crossbow bolts/piercing weapons, which isn't part of Hindu tradition (I think Ravana, greatest of the rakshasas, was actually killed by a round thrown weapon called an asthra). Here's a summary of the episode.

Gygax confirmed the inspiration in a forum Q&A post in 2005:

I was a fan of Kolchack, the Night Stalker, when it first aired, and sure enough they had a rakshasa as a monstrous evil on that show. I liked the idea of the demon being destroyed by a blessed wooden crossbow bolt, that being akin to the stake through a vampire's heart, so I went with that in the MM.

Nowadays I'd be less prone to allowing so easy an answer to the threat of a rakshasa, although not many adventuring parties are equipped with a crossbow and blessed bolts.

[RPG] Were Illithids inspired by Cthulhu

Indirectly, yes. Gary Gygax tells us that "the mind flayer I made up out of whole cloth using my imagination, but inspired by the cover of Brian Lumley's novel in paperback edition, The Burrowers Beneath." Said novel was firmly rooted in the Cthulhu mythos; in fact, Lovecraft's character Robert Harrison Blake wrote a short story titled "The Burrower Beneath." We may suspect that title was an influence on Brian Lumley's choice of titles.

The cover in question, for reference: 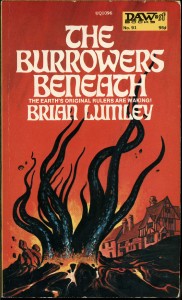 Back cover of Paranoia Second Edition