Related question: Is it balanced to replace a musical instrument proficiency from my character's background with an artisan's tool proficiency instead?

I'm designing a Wood Elf Outlander Warlock (in D&D 5E) who only has one hand. This makes my arm nearly useless. As an Outlander, I am proficient with a musical instrument, and have skill proficiency in Survival.

I have designed the character as a self-sufficient hunter, who uses everything from a kill: hides for clothes, meat for food, and bones as a carving medium.

What I would like to do is trade the musical instrument proficiency for a proficiency with a type of artisan's tools that would be used in carving bones into practical things I could use, or decorative items I could sell.

What kind of tools would be used for bone-carving?

The Player's Handbook, page 154 "Tools" doesn't have the exhaustive list. It describes "examples of the most common types of tools" instead:

Artisan's Tools. These special tools include the items needed to pursue a craft or trade. The table shows examples of the most common types of tools, each providing items related to a single craft. Proficiency with a set of artisan's tools lets you add your proficiency bonus to any ability checks you make using the tools in your craft. Each type of artisan's tools requires a separate proficiency.

Since there are no special rules for any of these types, sticking to this particular list doesn't make much sense — you are free to choose any type you want.

Rule-wise, "artisan tools" is a single concept. It wouldn't be really "homebrewing", because there are no new rules being introduced — you just say "I am proficient in this particular type of craft" and use the same mechanics for crafting as for other artisan tools types:

You can craft nonmagical objects, including adventuring equipment and works of art. You must be proficient with tools related to the object you are trying to create (typically artisan's tools).

[RPG] limit on what tinker’s tools can do

If you are talking about the Tinker's Tools found in the players hand book, then I don't think you need to worry. The tools themselves don't seem to be defined in the book, but the rock gnome tinker ability lists some things you can make with them. In particular, they're tiny, clockwork, gadgets, so it seems reasonable to assume that tinker's tools specifically refer to the tools you'd need to work with small mechanical devices, rather than large vehicles or fabrics.

More generally, just because the players can envision how to build something does not mean the characters can. Things like planes and, to a lesser extent, parachutes require a specialized knowledge of physics to get right and there's no reason to assume the characters would have this knowledge, even the wizards. What's more, in a world where dragons and griffons can fly, it's perfectly possible that traditional aeronautic devices, like planes from our world, simply wouldn't function.

You're perfectly in your right as DM to say "No, you can't build that thing." That said, you should endeavor to give them both the in-character reasons "Those aren't actually the right tools, physics doesn't work that way in this world, and your character has no reason to think this would work" and the out of character reasons "I'm worried this will cause balance problems and make it hard for me to run a good campaign for you." If you only tell them the in character reasons then the players will, naturally, view your reasons as obstacles to overcome, rather than a request to stop trying. On the other hand, an out of game request won't cause any confusion, but in game reasons can make it go over better and are nice to have regardless.

If one of your players really wants to play a character who can build anything via mundane means, you could try working with them to find or make a class that focuses on just that and only builds level appropriate things in reasonable quantities (this means both not being able to build a bi-plane at level one and being able to build a jet pack when everyone else is getting flight spells).

[RPG] What kind of instrument is a horn

It's exactly the kind of horn you're likely picturing in your head.

Ultimately, this kind of question is best handled between a player and their DM, as the type of horn will need to be consistent with the world they're in, the level of technology, and the player's backstory. 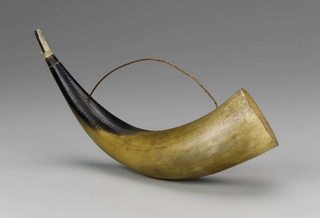