The vast majority of the historic warhammer heads found have a pointed and a blunt end. 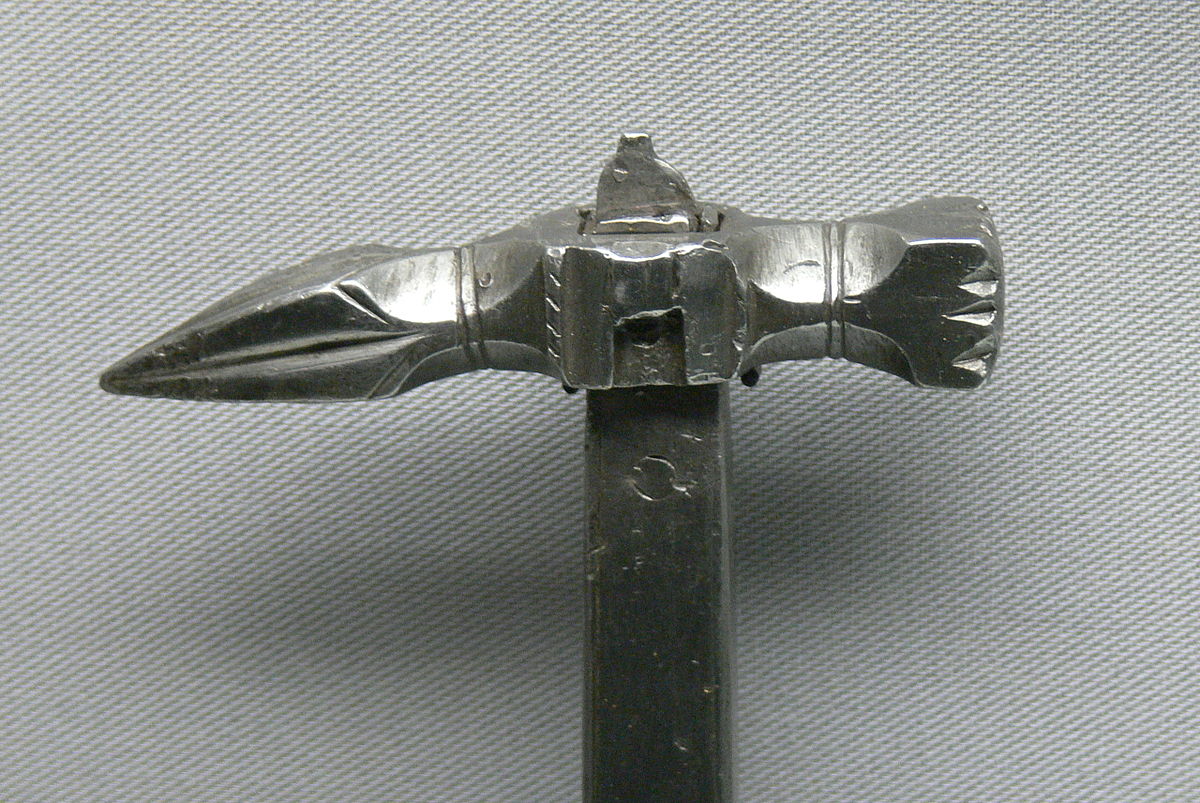 The horseman's pick was a weapon of Islamic origin used by cavalry during the Middle Ages in Europe. This was a type of war hammer that had a very long spike on the reverse of the hammer head. Usually this spike was slightly curved downwards, much like a miner's pickaxe. The term is sometimes used interchangeably with war hammer.
(http://www.medievalwarfare.info/weapons.htm)

In D&D 5 however they are handled as distinct weapons. They have two lines in the Weapons table (PHB 149). This alone might not mean they are separate items, as one side is piercing, the other is bludgeoning, and the damage could differ as well. But based on the price, they are indeed separate: the War Pick costs 5 gp, the Warhammer three times as much. (This incidentally makes no sense; a point is harder to forge than a slab.)

I know D&D is not exactly medieval Europe, but I am trying to make it more logical by combining the two weapons. The user of a Warhammer could choose between bludgeoning and piercing damage as a free action on his turn.
Would this cause any balance issues?

It shouldn't create any imbalance issues. Which physical damage type (Bludgeoning/Slashing/Piercing) you use has very little impact in the game, with regard to enemy resistance and vulnerabilities.

It's probably too strong

Firstly let's compare to what other 1st level domains get.

Domains that only get cantrips and proficiencies are definitely worse than your proposed feature, so lets compare with Death, Forge, Grave, Life, Light, Tempest and Trickery. But first...

Is it better than one attack per round? Well yes and no.

Because it is a second level spell, it is a limited resource that you can't have forever. When a typical cleric decides to cast spiritual weapon, they can't cast an action spell that turn which limits their action economy.

Why is this feature too strong compared to...

As you've explicitly mentioned, what do higher level clerics tend to do with their actions? Cast a lot of spells. So what do they usually do with their bonus action? Not much. They might be using spiritual weapon, however that comes at the cost of spell slots and not being able to cast an action spell. Typically a Cleric won't use their bonus action much of the time.

This ability affects the action economy quite significantly, giving the cleric with this ability a large number more attacks per long rest than most other cleric types.

Reaper allows the cleric to cast a necromancy cantrip at two targets instead of one, as long as they are next to each other. This might be the closest comparison to your feature however it's definitely not as strong. The effect only triggers in specific scenarios (compared to almost always) and when it is used, the caster must spend their action on a cantrip which is not an overly strong manoeuvre.

Blessing of the forge allows you to add +1 to a weapon or armor, which is OK in the early game but quite insignificant in the long run.

Grave domain has a significantly better save the dying cantrip, and better healing on restoring creatures from 0. They can also sense the undead. Neither is particularly game-breaking and both are situational.

Extra healing on spells, nothing too noteworthy here.

Gets an extra reaction option to give an enemy attack disadvantage, can be useful but reactions are limited resources. You can only use this as many times as your WIS mod.

Gets a reaction damage option. Reactions are limited resources, and you can only use this as many times as your WIS mod.

Can give a creature advantage on DEX saves for an hour, not gamebreaking.

I think this ability is too strong and versatile into the late game. Most of these other level one features are good or OK in early game and much worse later. The best ones are situational and this ability is almost always good.

If you cast a spell with a spell slot of 1st level or higher and an ally is one of the targets of the spell, you can make one weapon attack as a bonus action. You can use this feature a number of times equal to your Wisdom modifier (a minimum of once). You regain all expended uses when you finish a long rest.