I'm a fairly new DM and am trying to plan my own story, I'm having trouble envisioning an important part however.

I have the group getting separated and eventually meeting up. Before they realize it's the other half of the group, however, a fight ensues between the two groups. (PvP)

I have how the players get separated and how they are unable to recognize each other. I just want to know how to go about having the players attack each other and not realize that it is they're teammates that they are attacking. I'm unsure how the actual attack sequence should play out. The problem for me as a GM is that I am not sure how to work the at-table logistics. Narratively, everything is sound. I just don't know how to logistically set it up.

How can I go about having the two player groups fight each other without realizing who they are attacking too quickly or too late?

I have witnessed a game where the two stories are played out asynchronously.
Group A was going through their scenario (Took 20-30 minutes?) while Group B waited out their turn (with brief moments of "meanwhile" dialogue to keep them involved). Group A found the group of "bad guys", and managed to launch a sneak attack. After the surprise round, they rolled initiative and then their story paused.
DM then hit the proverbial rewind and we played out Group B's story. They follow their path (with brief moments of "meanwhile" dialogue to keep Group B involved) and eventually get attacked by a group of bandits who get a surprise attack on them.
At this point it was clear that Group A had attacked Group B. Group B relished the opportunity to get a return round. At relevant moments, calls were made for perception checks (before the sneak attack, after the surprise round, when someone got face to face it was with advantage and they realised what had happened)

Everyone seemed to enjoy it. Even though Group B knew out of character after the surprise round that it was Group A that attacked them, they rolled with it.

You could set up an almost identical board for each (have a few flourishes or touches to make them seem different) Group A's board showing the positions of Group B as bandits, and vice-versa. 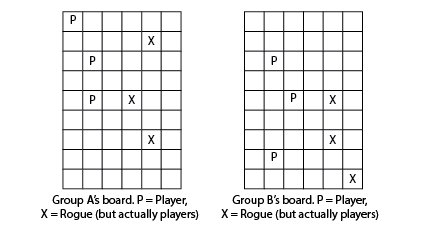 Make the 'bandits/rogues' for each group move in the same initiative order. So you can get a whole round of attacks from a group, then a riposte from the other group. You make the 'rolls' behind your DM screen and fudge them to get the same result as the opposing team did*.
Once they figure it out you just switch them onto the one board. Probably harder to pull off, but could really have them fooled if you can do it.

[RPG] How to make overcoming a language problem interesting

Fractal is the way to go here. Try this on for size, some trimming may be needed for it to fit perfectly. I'm going to be assuming she speaks Latin fluently, and the rest of the party speaks modern English where assumptions need to be made.

Behavior- Every time an attempt is made to communicate, the GM may have Language Barrier start a conflict. The PC is attempting to force a concession from it, treating it as a normal obstacle. Language Barrier tends to maneuver, attempting to place aspects representing miscommunications on those trying to communicate. ("No thank you, I eat bees" "Help! I hate you!") It will either use those aspects to invoke for effect (namely, an ill advised action) or use them to attack the PCs stress track, trying to get consequences related to the language barrier. ("Aqua means Fire" "She gratiasing hates me.")

Why not use a consequence or an aspect?

(IHMO applies to everything following this. These are both possible ways to do it, but I think a fractal (though possibly not this particular fractal) is the best solution.)

Aspects are generally something that works both ways. A good aspect helps you as often as it hurts, and if you want this to be a disadvantage, then this works better. That said, an aspect is not a bad fit — certainly there's no problem with having one aspect that's mostly bad, and with creativity this could be used well. I used this longer way because "use an aspect" is a three word answer, and I assumed the OP was aware of that option. Also, there's little a character can mechanically do to combat an aspect. (Other than change it at the next opportunity, and narrativly fight against it.) Consequences on the other hand are uniformly bad. (Not that you can't invoke a consequence, but that having a consequence = bad thing in the mechanics of the game. It's something to avoid whenever you can.) Starting play with a consequence is equivalent to starting most games with a serious hit point loss — possible, and an option if you don't mind a mechanical penalty for coming up with an interesting story. As a GM and as a player, I tend to prefer rewards going to players who come up with cool stories.

The advantage of the fractal is that you can damage it. Over time, you'll inflict consequences on it, which let you bypass it easier, both by invoking its consequences and by the smaller amount of stress it can take before conceding. These consequences are sections of the language where you figure out how it works. (Say, certain words you know know the meaning of, or parts of the grammatical structure.) Eventually, you'll take it out — not just force a concession, but a complete victory. At that point, you can make it go away for good, just like if you took out a bad guy, you could kill him or otherwise completely remove them from any future encounters.

Are you familiar with the Same Page Tool? It sounds like you had expectations that you tried to convey subtly to the group in-game, but this wasn't overwhelming enough to overturn their existing expectations or the conflicting messages being sent by your campaign kickoff's dominant tropes, so you weren't on the same page.

Getting on the same page is the first step toward your players having their PCs act like real people – you can establish your expectation, and the possibility, that they can ignore the common game-like meta structures that are often taken for granted around a roleplaying game. Things like they are all a party and cooperate and they're aiming for survival of their PCs rather than character embodiment are common assumptions that are often necessary for certain kinds of campaigns, because it is easy and expedient to say that some play possibilities are "off limits" in order for the group to focus their game time on the fruitful voids of the campaign.

What appears to be the problem is that you have tacitly broadened the fruitful void, without notifying the players of this strongly enough to make them set aside their (productive, functional) RPG-playing conventions. On top of that you set up the campaign with a very standard "form party, loot dungeon" structure, which strongly conveys a standard "dungeoncrawl campaign" set of expectations that are the opposite of what you seem to have hoped for.

How to get them play their PCs like real people is then a two-step process: first, clearly grant them the breadth of allowed play possibilities necessary to be able to play them like real people. Second, cultivate a group value of character embodiment.

The second is the hardest part actually, and the how can't be covered here because the barriers to doing that are personal and depend on your players. Given that they haven't even yet become aware of the possibility with the first step, I have no data to even begin giving advice on the second.

So, that makes the first step very important: get on the same page, eliminate the assumptions about how to play a dungeoncrawl-type fantasy RPG, and replace those assumptions with explicit understanding that you're aiming for humanist drama in a fantasy context. Once you've had this conversation, only then can you even find out whether your players are interested in embodiment-focused play and what their individual barriers for that are, if any. Be aware that they may not be interested in this kind of play; be prepared to have a conversation that is about negotiating a common ground, and it may not lead to the sort of play you're looking for. It's possibly you'll all get on the same page, but if you can't, that may mean the group can't continue – but that's better than forging ahead with conflicting expectation and play goals.