While this may be opinion-based, this question is specific enough to produce well-argued and specific answers.

I think Mariusz Pudzianowski, Strongman competition champion, is a good real-world comparison. Generally, his physique is similar to a Goliath (esp. Barbarian). Mr. Pudzianowski is 6'1" (185cm) and weighed approx. 320 lbs (145 kg) during his Strongman days. Despite being a foot shorter than the shortest Goliath, he lands in the 0.66 percentile of their starting weight distribution.

Question: Is it reasonable, when creating a Goliath, to use weight way higher than the one provided in the EE Companion, generally going for around 50-53 lbs/foot, so 350-425lbs (or more)?

If you'd like, you should definitely consider allowing for characters to gain weight dynamically! This could even potentially provide a relevant in-character explanation for increases to the character's STR modifier that they may earn through leveling.

Is it reasonable, when creating a Goliath, to use weight way higher than the one provided in the EE Player's Companion?

With the proportions provided in the EE Player's Companion, a Goliath looks more like a professional basketball player (Yao Ming) than a Strongman.

I agree, artwork depicting Goliaths in D&D literature argues that they look like Strongmen. However, the tallest strongman competitor in the 2016 Arnold Strongman Classic is Hafþór Björnsson measured at 6' 9" (206 cm) and 397 lbs (180 kg), which is shorter than the shortest Goliath and heavier than the heaviest Golaith. To better fit the image you see in the artwork, it's reasonable to increase the Goliath's weight range +110-175 lbs (50-80 kg).

Consider Hafþór Björnsson (GoT, "The Mountain") who is a Strongman just like Mariusz Pudzianowski. He's what I would consider the prototypical "IRL Goliath", almost tall enough and definitely muscular enough.

As you said, "[Goliaths] seem to be all fairly well-built, being a towering heaps of muscle" - Björnsson's frame is very similar to the Goliaths I see depicted in D&D literature: 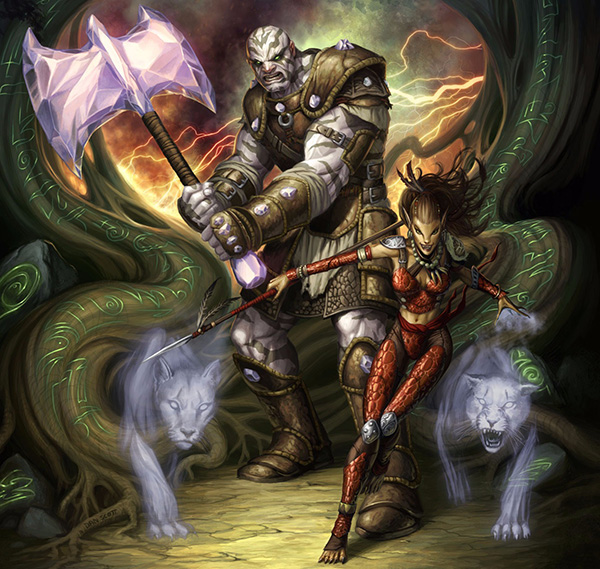 Based on this and what you've already mentioned on Mariusz Pudzianowski, a Goliath ought to be 110-175 lbs ( 50-80 kg) heavier than their starting weight range specified in the Elemental Evil: Player's Companion.

In professional sports, the NBA has the tallest players by average. In basketball, the center position is played by the tallest players. The average height of an NBA center is roughly 6' 11" (211 cm) tall and weighs roughly 250 lbs (113.5 kg). Assuming this chart's accuracy, of course cited by BusinessInsider:

Consider Dwight Howard (center for Houston Rockets). He is listed on Wikipedia with a height of 6' 11" (211 cm) (nearly matching the lower-bound of the Goliath's height) and a weight of 265 lbs (120 kg) (~22 lbs/10 kg lighter than the Goliath's lower-bound weight). While he is well-built, he's way leaner than the Goliath artwork I showed earlier. So, he's not a good comparison.

As @SteveJessop pointed out, an athlete's weight fluctuates over years of training and dieting (e.g., Muhammad Ali). USAToday has a list of all of Muhammad Ali matches. I think we can agree that Ali followed an intense training regimen and a strict diet (esp. while preparing for matches). At his lightest weigh-in, Ali was 188 lbs (85 kg) and at his heaviest weigh-in, Ali was 227 lbs (103 kg) (excluding a 236 lb outlier for last match). Ali's relative body weight change over his professional boxing career compares closely to the Goliath race's relative body weight variation:

NOTE: I got the Goliaths' weight variance from their starting weight range, while Ali's weight change is calculated over 20 years of his athletic career.

Thus, it is reasonable to allow for the character's weight to increase further by as much as 18 % over the next 20 years of the character's life - as Ali's spanned roughly 20 years. For example, a young Goliath character who weighed 340 lbs (154 kg) at character creation could weigh 401 lbs (182 kg) (18 % increase, +61 lbs) after 20 years of training (adventuring, battling, smithing, etc.) in-game time.

When picturing the Goliath described in the Elemental Evil Player's Companion, you should picture Yao Ming - not a Strongman: 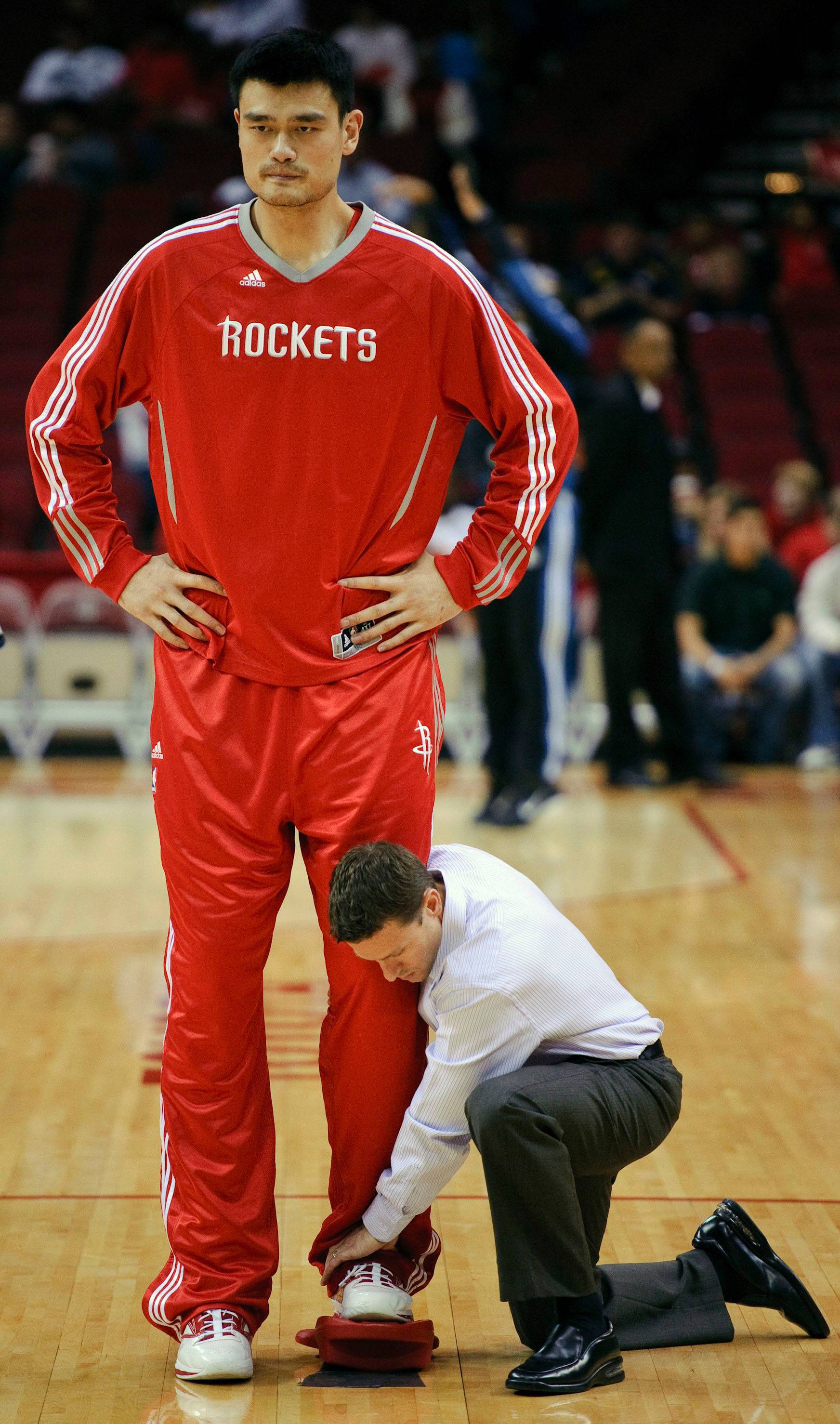 If you'd like to tweak Goliath measurements to fit a Strongman (Hafþór Björnsson or Mariusz Pudzianowski), then you have two options.

There is now one spell from Explorer's Guide to Wildemount that will make an object immovable, and one that will increase its weight. Then one that increase the weight only of a creature. Here they are:

The spell immovable object has a 1 hour duration and it reads:

You touch an object that weighs no more than 10 pounds and cause it to become magically fixed in place.

The spell enlarge/reduce multiplies the weight of the object it is cast on by eight.

The spell flesh to stone can turn a creature completely into stone, applying the petrified condition. This condition multiplies the weight of the creature by ten.

I know you didn't ask for objects, but I think it might be a possible answer the the problem you are trying to solve without a spell. There is a magic item in the DMG called the Immovable Rod which has a button, that when pressed become fixed in space and can't be moved until the button is pressed again, or something like 20 tons of force is applied.

DnD 5e does not contain information on the weights of jewelry.

In fact, the PHB has a 5gp Signet Ring listed as negligible weight.

As far as I know this is consistent with previous editions as well.

Tracking encumbrance for individual items generally isn't worth it (a lot of work, you ruin a lot of fun, and don't really get anything in return), especially not at the granularity of ounces. If you really want to do this you can use real life approximations. Real life gold rings generally weigh around 4 ounces/100 grams (with individual variation of course). You can handwave this to give you 4 pieces of jewelry to the pound.